Somewhere in the process, the object can't render the displacement map anymore, even in the preview window shows the right bump amount. At start it works well but somehow it lost it recently... I check all connections, all values seems OK, the bump image shows in the right place and should make a huge bump effect (like in my image #2. But nothing, the surface remains flat as a sand desert. It's an animated object but no keyframe on this parameter, all frames show the same absence of bump. I check there is no object's double superposed. I copied the object, I try tho connect the image directly to the Displacement node socket: nothing. I tried a Noise texture with Color Ramp to enhance the contrast and then, a very small amount of bump appears.

The goal is to have a small amount of relief, but here I exagerate to enhance the problem.

The object contains several materials. I tried to recreate a new material with new nodes: nothing change. I put simple Glossy node with another image for the bump: same result. Correct effect in preview window, nothing in render.

Bump mapping works on other objects in the scene.

Capture #1 The material preview show the expected result with these settings: a huge bump. Remark: there's two image for bump, one (top) for the bumpy surface, another (bottom) for slim lines barely visible. 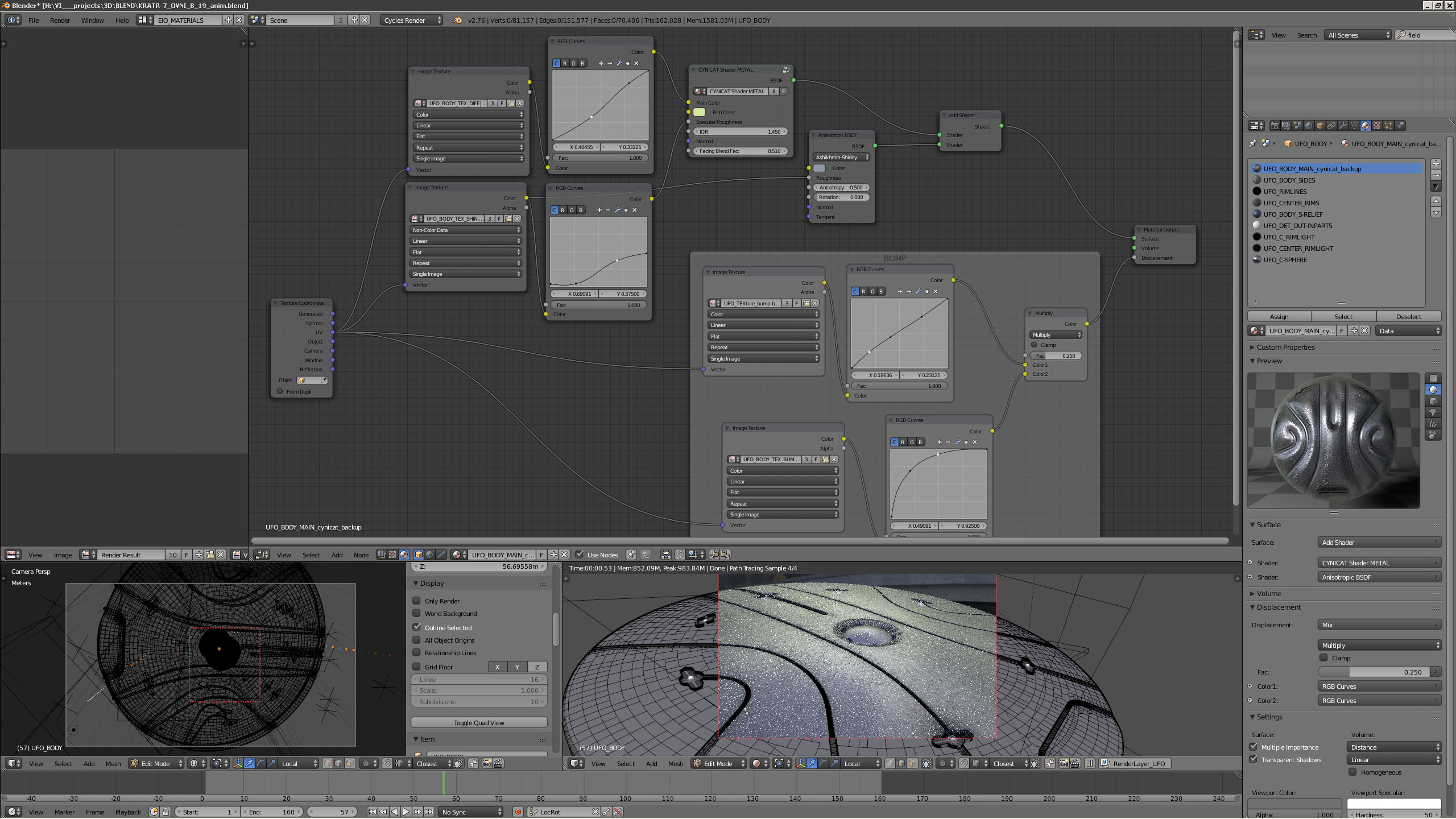 Capture #2 When the texture image is connected to a View node, it shows as it should. 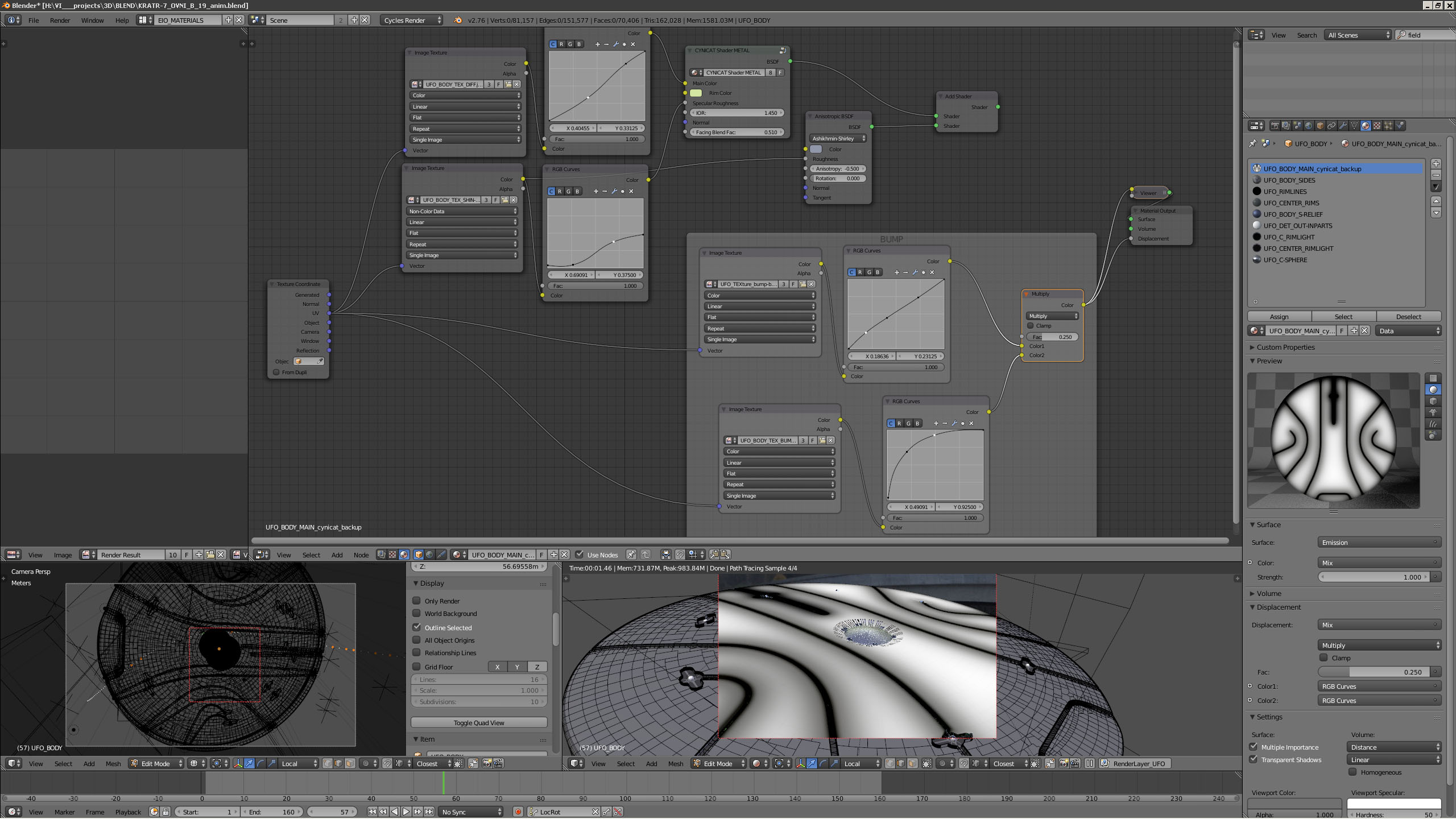 Ok I got a temporary solution. The bump was still there but for some reason, it was so light that it was barely visible.

After the Color Mix node and before the Material Output node, I add a Math Multiply node (value x 20) and then the bump shows up again.

But now rendering, I see baaad artifacts in the bump texture due to A) the Math multiplier node who force the grey levels and B) a slightly poor image histogram. Photoshop's histogram shows some pikes. Looking closer, there is some posterize-effect in the gradient and its ugly in the render. The texture image is 4000x4000 pixels, large enough I think. I tried PNG and JPG, tried to remake it with more histogram values, same result.

But still at some point the bump map went to almost zero for an unknown reason.

Using a normal map only gives the illusion that the surface is altered by changing the surface reflections at a given point. In the viewport you are viewing the shield at an acute angle so you see the true geometry of the mesh. Your second example is using an emit shader to view the bump map, by emitting light it will not show any of the reflections that give the illusion of an altered surface.

To get real surface changes you may want to try a displacement modifier. Note that this modifier will only move existing geometry, it will not add new geometry to get the final surface you want, so you may want to use a subdivision modifier before it.

0
Why Doesn't my Ambient Occlusion Texture Show Up Properly"
5
Automatic bump mapping
2
Mix normal texture with noise texture to create flat patches
1
How does texture mapping work in Blender?
5
Find the edges of checker texture for adding bumps or ridges?
1
Distorted Image texture as background
0
Bump Map applique in Blender 2.8?
1
Why is material with 'Displacement and Bump' set only showing 'bump' displacement in Cycles?
1
How to combine texture nodes?