How can I manually calculate bpy.types.PoseBone.matrix using Blender's Python API?

I have this .blend file which has a simple scene, and a python script. There's a readme section in the script, but to give a general idea:

There are two identical meshes in the scene, one skinned, and the other unskinned. The skinned mesh has a 20 frame animation. If you move to any frame of the animation, and then run the script, the script will modify the position of the unskinned mesh's vertices, to match the vertex positions of the skinned mesh, for the current frame of animation.

The formula I use to calculate the new vertex positions is:

It's worth noting that, in my Python script, I do not traverse the hierarchy of bones to calculate the correct transform matrices; simply accessing the pose matrix and inverted bind pose matrix for the current bone is enough.

I have found the interpolation functions for Matrices in Blender's source code, and I have re-implemented them in Java. For the root bone of an armature, the matrices that my engine generates for the bind pose and inverted bind pose are correct for all frames in my animation.

However, for non-root bones, the bind pose and inverted bind pose are incorrect, i.e. they do not match the pose_bone.matrix and data_bone.matrix_local.inverted() readouts that Blender gives in the python console.

So, it seems to me that, it isn't enough to export the bind pose and inverted bind pose matrices, and interpolate between them for given keyframes.

Instead, I either need to:

Essentially, I need to know how, using the Python API in Blender, I can generate a matrix equivalent to:

Without directly accessing bpy.data.objects['Armature'].data.pose.bones['Bone.001'].matrix, if that makes sense?

So, I need to know, step-by-step, what child/parent bone matrices (available via the Python API) to multiply together, to give a matrix equal to the bind pose (bpy.data.objects['Armature'].data.pose.bones['Bone.001'].matrix) of a given bone.

I've been linked to this diagram before:

But I wasn't able to follow along with it using only the Python API, as I was only able to find the equivalent functions for each step in the C code, not the Python API.

Is the bone's world un-posed matrix (the pose_bone.matrix in rest state).

Is the bone's local pose matrix.

From there we can calculate any bone's world matrix by recursively traversing it's parents. Note: This will not include any constraints or IK (but it will include drivers or actions):

You can test it on an empty and some armature with some active pose_bone. Also the armature_object's transformation is accounted here:

this code gives the bone's 4*4 matrix in object(armature) coordinates: 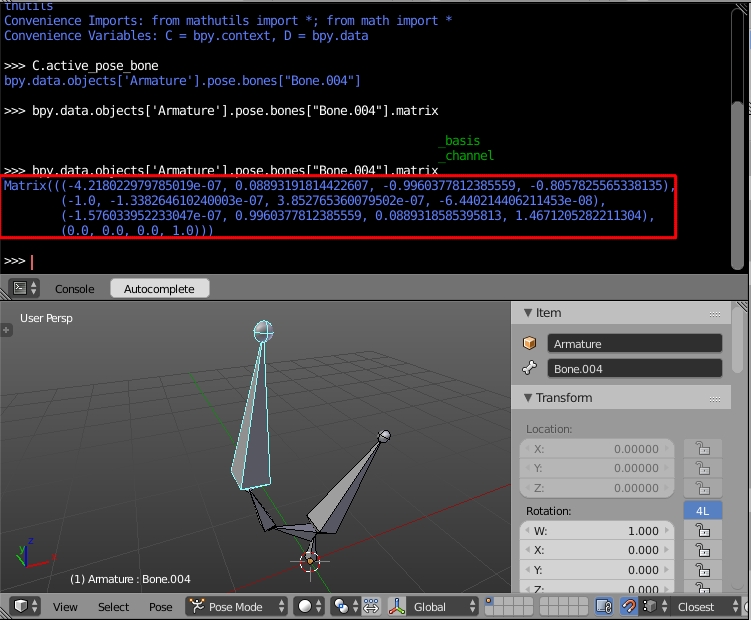 this code gives you the rest pose matrix in object(Armature) space: 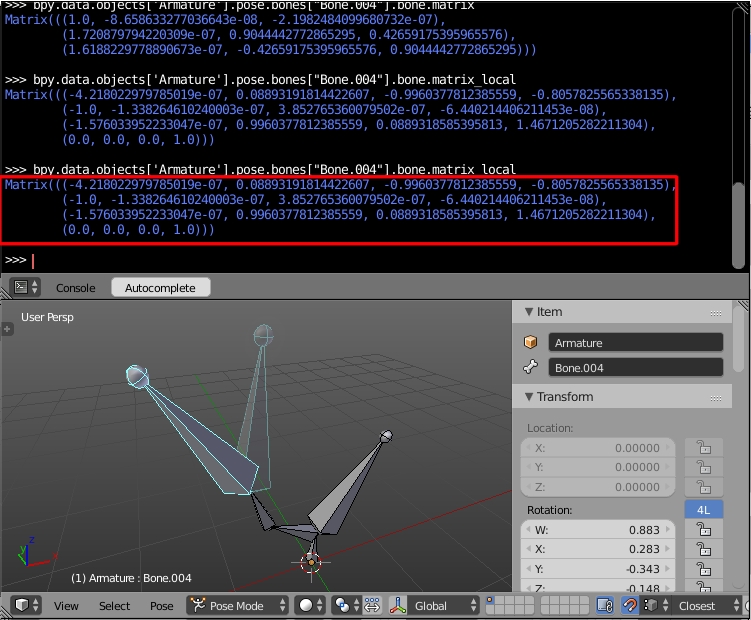 Note that this matrix didn't change after rotation(transformation).

and this one gives you the current transformation matrix relative to the rest pose in local coordinates (matrix_local): 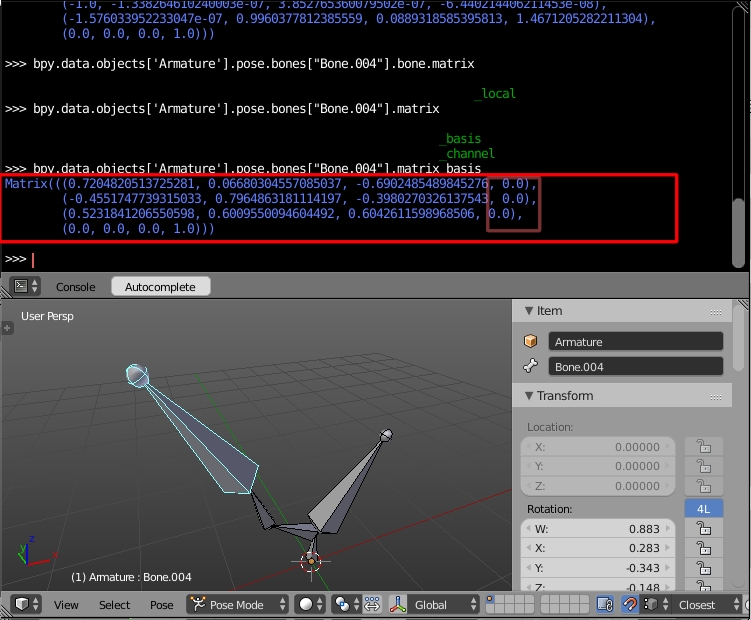 In this picture the red monkey is green monkey's child and you see the world matrix of each one(notice the translation part which is the same as location): 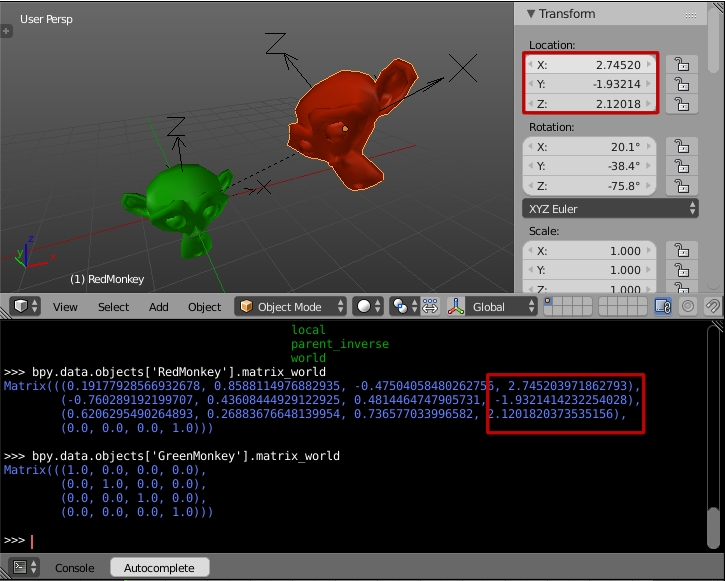 because the parent's matrix is just identity the world matrix of the child in this configuration is equivalent to child matrix in the parent space: 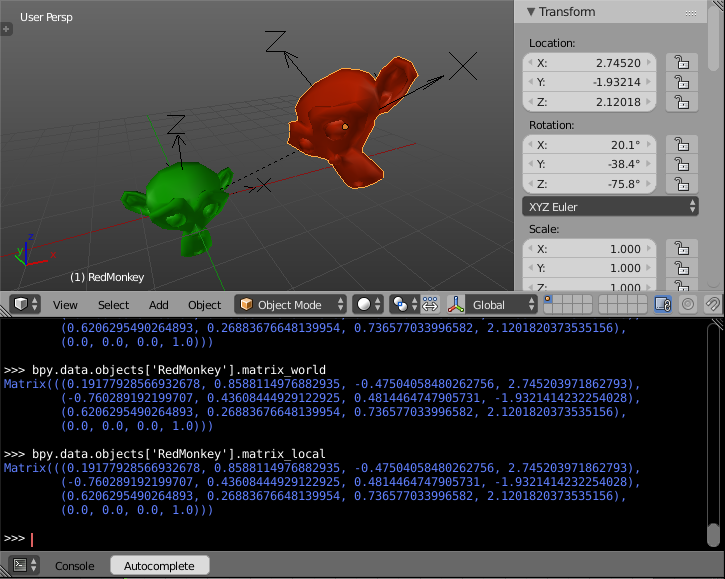 now if the parent transform to somewhere and some rotation, its world matrix times child's local matrix gives the child's world matrix: 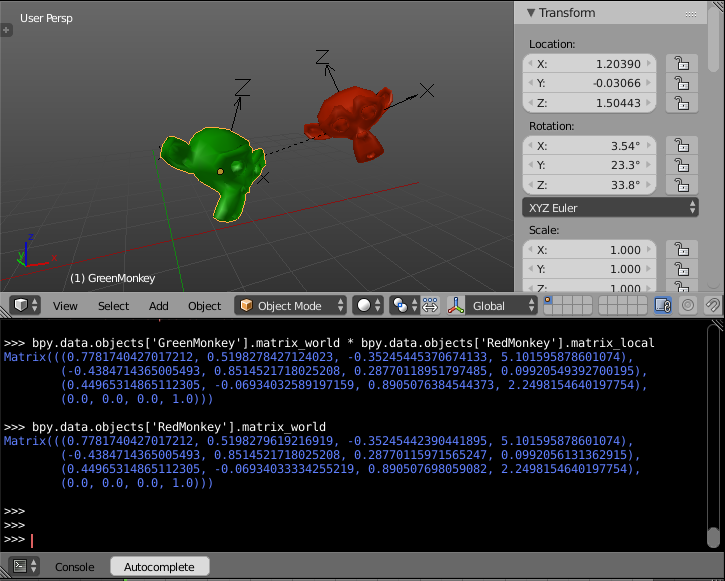 Converting a transformation in some coordinate system into its counterpart in world coordinate:

martix of X in S system after applying becomes:

and now we should turn back to world system:

thus the form of transformation T in world coordsys becomes

but its simpler to use .matrix for calculating a bone's world matrix. you can simply use below function and apply it on an empty:

I copied the following script from this answer. The related commented functions are:

Not the answer you're looking for? Browse other questions tagged python animation armature bones or ask your own question.

9
How does blender calculate poseBone.matrix?
3
How can I move a PoseBone to a specific world space position?
2
Assigning an empty parent object
3
Get visual transform of object through python
2
Creating a generic IK/FK snap script
1
Reverse pose bone inherit scale via python