I currently trying to join two rigged (and animated) models, which both has separate meshes, separate bones and separate animations. The first mesh is the horse while the second mesh is human: 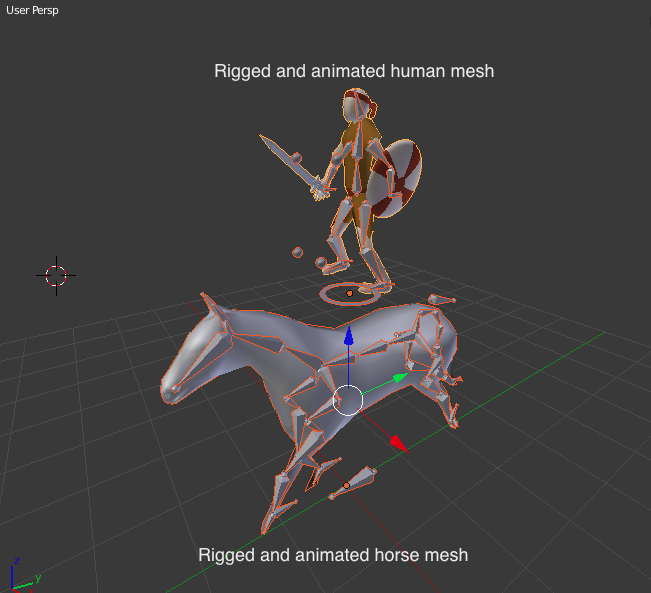 So I am interested to join human model onto horse model to make a rider: 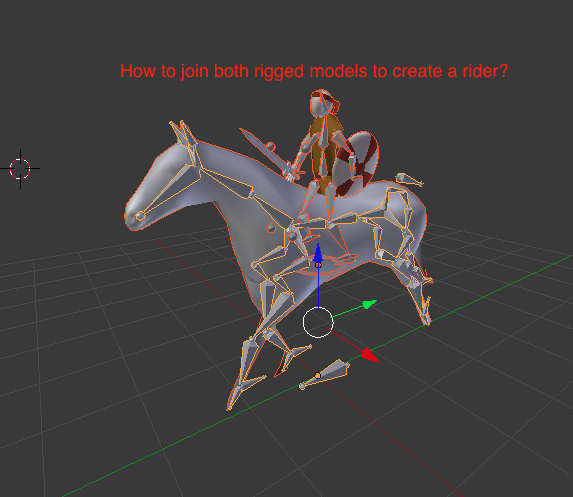 I think the best way would be to make horse as a parent and human as a child during the join process. In that case I would like that all horse animations (there are 3 of them - idle, walk and run) would remain as they are, while I can lose human animations, as I will need different ones for it. I was also thinking to make human root bone as a child of one horse back bones, that when horse moves up and down it would move entire human mesh together. It would be also good to keep the same weights that human bones would not start deforming horse mesh and vice versa.

I tried to use Ctrl+J by selecting various combinations between bones and meshes in object mode, however, I noticed that it messes up scaling and rotation of the child object. So I was wondering how it would be possible to properly join these models to create a rider?

Have you tried doing exactly this selection?

If you've already tried this, ensure all the meshes' object transforms are zeroed out first, and then repeat the above. If that still doesn't help, check out any constraints/controls you have. If you have a master-slave style rig, you'll probably have to re-apply the constraints after doing the join.

Posting a .blend would help too.

0
Combine separate armatures
1
Can I join two armatures so that the bones keep their animations?
0
How do I reconnect the bones within parented armatures?

0
Apply scaling to rigged model without affecting visual aspect
2
Light issue when joining two objects?
0
Copy model + armature to other file?
3
Joining 2 Armatures and keeping the weights
0
Is it possible to animate a single mesh as if it were multiple objects?
2
Preparing solid mesh for rig by combining multiple modified meshes