Calling properties of objects in python only works for current scene even when other scenes are defined?

I get an error when I define obj2:

However, there is no error when I define obj1.

I've found some more confusing problems related to this, and some of them could help solve this question. For example, if I define obj1 in a different way (bpy.data.objects["obj1"]), I will get an error when calling a property (obj1["prop"]).

Why can't I define an object from another scene when the scene is defined and the same method of defining is used as the current scene (that works)? And what is a solution?

EDIT: Ive used an answer for my code, and it raised another issue. Here are the details:

NOTE: I printed all the active scenes, and both scenes were printed. If I remove either part of the code (definition of main/definition of hud) it will work, but it won't with both. Also, for other reasons, I am not using scene = logic.getCurrentScene. Even if that works, the problem will come back when I use 3 scenes. The console is telling me (with the code above) that "hud" is not defined. Furthermore, if I define the objects under the definition of the scene (e.g. main = scene), it will work. However, this raises a problem: I cannot call the object afterwards. In other words, it seems as the bge is forgetting the hud after I've defined it explicitly. 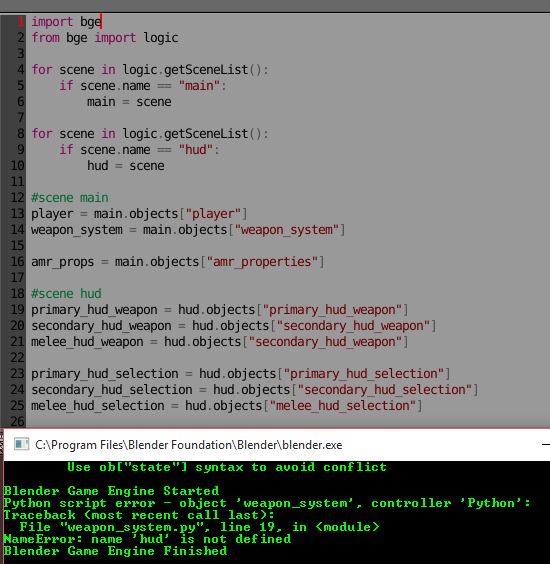 I have a scene named "main" and "hud"

I'm not sure exactly why your code is not working. Maybe you have incorrectly referenced your HUD scene? I'll give you an example of what has worked for me in the past, and it shouldn't give you any trouble.

Do not use bpy in BGE, it uses blender data that is not accesible while running the game.

But that's not the problem, that's just to avoid future problems. It's not possible to know exactly whats happening without the blend file but you can check the following list:

Seeing the kind of error you've got it seems that the scene is there but the object isn't. You can print all the objects in the scene with print(hud.objects), that should help finding it. You can also print all inactive objects with print(hud.objectsInactive). If neither of them shows your object, it's probably hidden or unreachable by the game engine. You'll have to investigate what's wrong with it.

By the way, though it's true that you're defining a variable (and that is an object in Python), you are not defining an object (at last not in BGE). You're creating a varaiable that points to an already existing object, it would be more acurate to say that you are referencing an object. The same applies to scenes.

When you use this code:

1
How can I have objects in second scene be affected by lighting?
4
Message actuator/sensor across scenes?
1
Can not access game object added in overlay scene
1
Have console redo a function until desired outcome?
1
How to use python classes with BGE objects?
0
Finding closest distance from point to mesh in BGE
2
How to import a blender python script in another?
0
BGE toggle select object
0
Why does Blender Game Engine sometimes not render texture?