I struggle with one thing. I need to create a 4 way video for a pyramidal hologram. How can I do it using blender? I have tried to search everywhere but seems that Im not hitting the correct keywords.

Transform strip effect is the way to manipulate input strips around the "canvas". As stated by the Blender Manual page:

Transform is a swiss-army knife of image manipulation. It scales, shifts, and rotates the images within a strip.

Select the given video strip and add several Tranform effect strips to it (the must all be referred to the input, the one in blue, so always pick it before adding each effect).

You'll not need to duplicate the strip several times, as the effect strip is already a copy of the input video itself, but with custom parameters.

Make sure to assign a Over drop blending mode to each tranform strip and mute the input one.

If you are planning to use multiple views (as shown in this video), just assing a transform strip to each input video:

The 4 input videos were made by rendering the same animation from 4 different cameras: 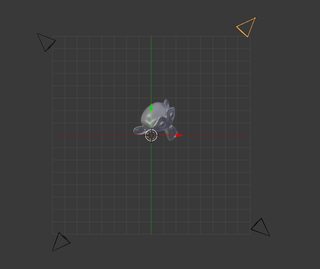 You can find several templates for Blender at: DIY hologram using a 4-sided pyramid

Not the answer you're looking for? Browse other questions tagged rendering video or ask your own question.

2
Problem rendering a video (Cycles / Node Editor / VSE)
3
Video texture is out of sync in blender, but fine in other programs
5
How do I render a Panorama-tracker stabilized 360° video?
4
Blender VSE Renders audio/video out of sync
1
Speed up a multiple video files in a one project
4
Using two GPU video cards
0
Video editing missing feature(?)
1
Adding Borders to a Video (Letterbox Effect)
1
Video render is splitting the final video into chunks