Hi when I was rendering earlier I set my samples to 150 and then in the top bar of the render pane it would show samples 150. Then I reset my user interface and when I render, I still have the samples set to 150 but at the top it now says Path Tracing Tile and it's increased the samples to 240, this has made it so that now my image is rendered in 2 minutes whereas before it was rendering in 1 minute.

You have Square Samples feature turned on, which squares specified amount of samples. This means that if you set 150, it will calculate 22 500 samples (not the task you should try imho).

In case of using Square Samples you'll see exact amount of them to be computed in the bottom of Samples scroll (it will be shown there only if Squares Samples turned on): 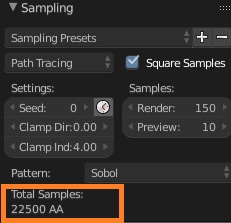 In your case, you have 12 samples specified in Render samples quantity, thus it'll render 144 samples.

When rendering, in the top of the UV/Image Editor screen you have shown:

Tiles are those small boxes which appear on the rendered image where calcualting is being done at the moment. They are the amount of work which Blender is able to calculate at once taking into account saved user preferences, scene specifics, and hardware. 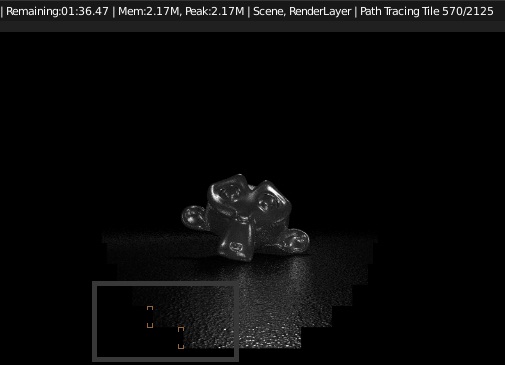 So taking this situation, it calculated 570 small orange boxes of 2125. Tiles' quantity will change in several cases:

You can read more about tiles quantity vs. performance here. Generally, most likely you won't have to change Auto Tile Size setting, which is turned on by default.

Not the answer you're looking for? Browse other questions tagged cycles-render-engine rendering animation interface path or ask your own question.