How can I enable dynamic paint in the viewport without the weight colors?

I like to use dynamic paint to manipulate vertex groups between modifiers in the modifier stack (e.g. after an Array modifier to control a particle system).

By default it visualizes the weight colors on the object. This is good for adjusting the DP settings, but otherwise impedes the visibility of the model's topology, and is generally ugly. However when I uncheck the Display modifier in viewport button it not only goes back to normal shading on the object but also disables the actual DP results (in the viewport). So all following modifiers use the vertex group as per pre-DP.

Is there a way of just turning off the weight color visibility of the DP modifier without disabling it's effects entirely in the viewport?

Under the Dynamic Paint rollout of the Physics panel (on the canvas object) there is a Display surface preview in 3D views eye-button next to each DP surface slot. This does exactly what you are looking for. 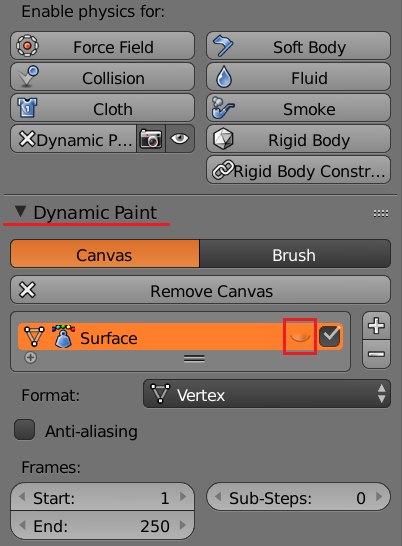 Not the answer you're looking for? Browse other questions tagged interface 3d-view dynamic-paint or ask your own question.