Can you project an object with an array modifier and curve following modifier onto a curved surface?

I am attempting to put an array of objects aligned on a curve into a fractal type of configuration projected onto a curved surface. I know that sounds complicated, but my hope is that someone knows how to do this with relative ease.

I believe this can be done with a bezier curve as a parent, which is shrinkwrapped to the surface, while its children follow the path, and an array modifier is used to extend it along the path. Shrinkwrapping the object itself flattens it, which is not what I would like.

To start, let's leave out the part about the array following a curve, and just look at the fractal pattern of objects onto a curved surface, because I think this is something that a lot of people would run into when making scenes and would be highly useful to do in an automated fashion.

Starting with the small complex set of objects, such as the cube and balls to the left, and the large curved surface (spehre) to the right: How can we get to something like this? (as an array upon the surface) (Sorry it's such a bad attempt at getting them oriented on the surface): 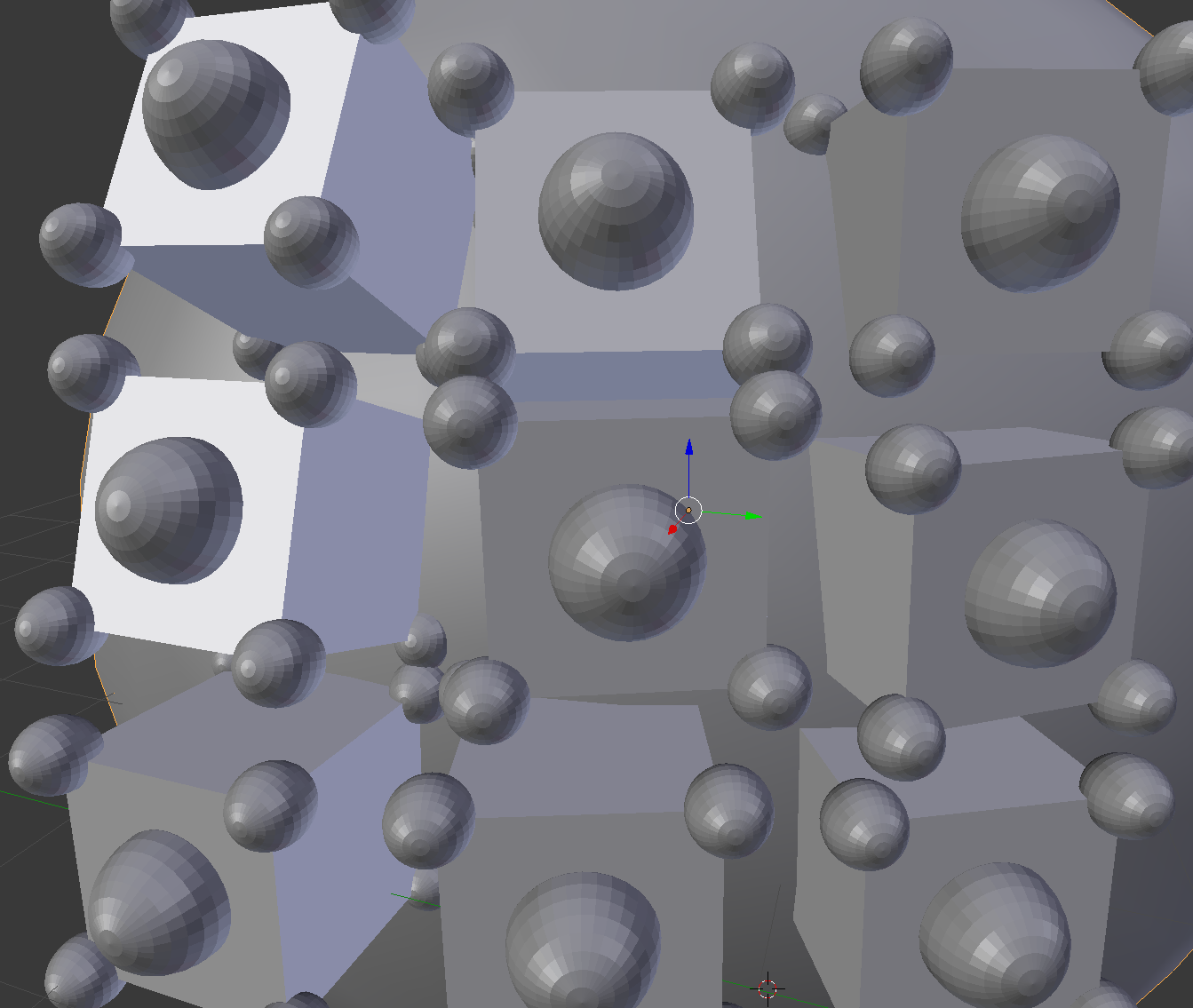 or this: as a fractal modified array or random on surface? I am attempting to do this with cylindrical type aggregations of objects, which follow bezier curves, which I can project the bezier curves onto the surface, and then make the object follow the curve and set up an array to make it follow throughout the curve, but it does not work out so well to do it with hundreds of objects quickly.

To do it with these cubes, it would look (something like) this: 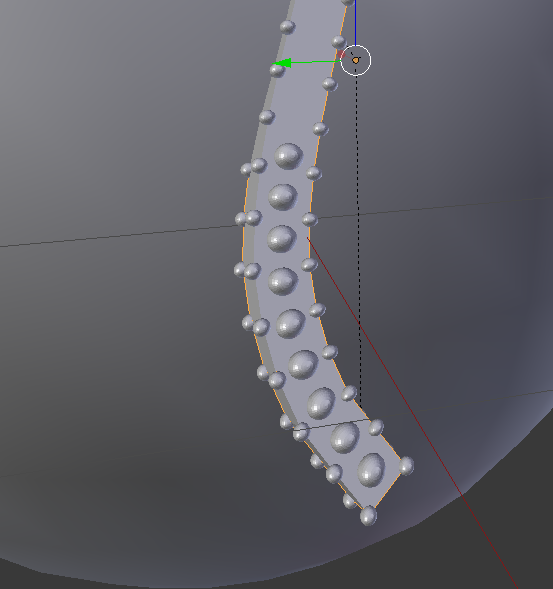 If you apply the shrinkwrap after getting the array of cubes and they are following the curve, you get this (nothing happens to project the cubes onto the surface, the bezier curve just gets put there): 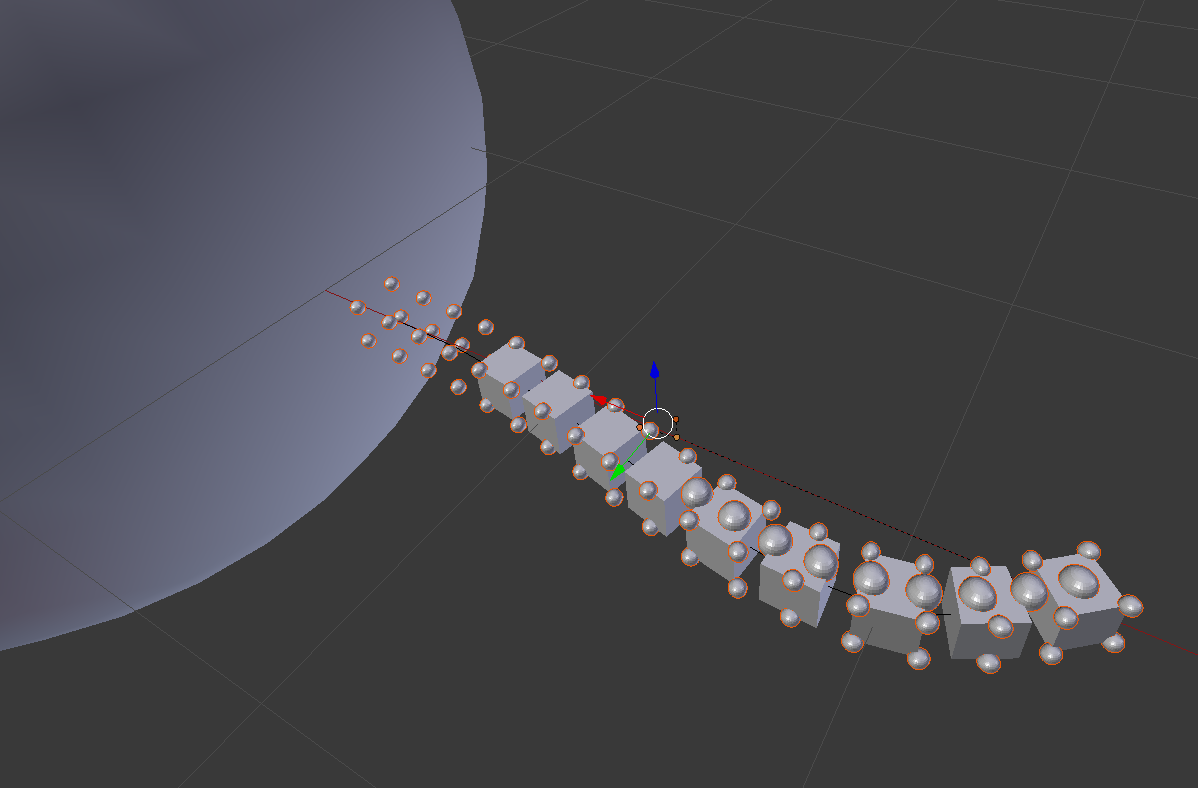 So, it appears you must have apply the bezier curve as the parent object after the projection, which makes it difficult to get the ration/translation applied to the cube objects.
Furthermore, the shrinkwrap doesn't completely get the bezier curve along the curved surface: I think this method would have huge consequences of use if it could be applied with varying amounts of fractal pattern applied to each portion.
Such as having a standard patch of grass mesh, then applying it to a series of planes created with fractal patterns (random soil arrangement), then applying the standard grass to it in a fractal pattern while varying the grass mesh slightly each time. It could make a realistic random grass scene with just a plane and a few blades of grass.

1
Question on tapering a bezier curve
0
How do I maintain the road's texture after applying the curve modifier to make the road a single object?
5
Pattern on Easter Egg for 3D-Printing
2
Make Bezier Curve look like Torus Array
0
Mirror multiple meshes with bezier curve
1
Can I duplicate a mesh along curves if the curves have been moved?
0
Blender 2.8. Trying to join bezier curve with bezier curve made from spiral: “Cannot make segment” error
2
I can't get an arrayed object to follow bezier curve