How to copy constraints from one bone to another?

I've created some shapekeys driven by the bone controllers for my character. Then I gave constraints to the bones on the left side. Now I want to copy and paste them to the right side. Two questions: 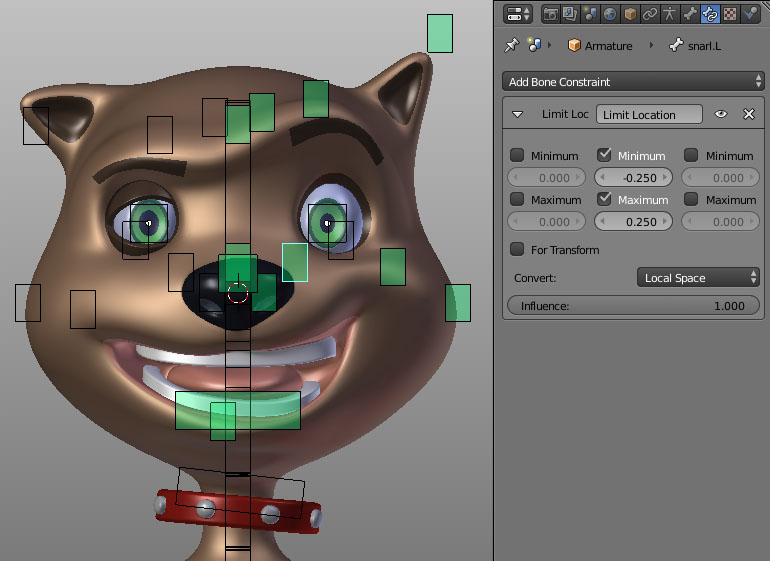 You can use the script below. It's pretty quick and dirty, but works. The value of copyFrom in line 3 determines if you're copying from left-->right (if its value is "L") or right-->left ("R").

The armature must be selected for this to work.

EDITED: As requested, here's the 3rd version of this script that: 1. Inverts the values of properties (turns target bone names from L to R and vice versa) 2. Switches between min and max values in properties between sides. 3. Turns influence 1 into 0 and 0 into 1. 4. For other numerical props that aren't min/max/influence, multiplies values by -1.

Works as described in this gif made by @Gonzou.

Blender has a built in way to copy bone constrains, but it only copies from one bone.

Then press Space to bring up the search box and type in "copy c", select "Copy Constraints to Selected Bones".

The problem: you don't always want to invert the sense of the influence. I don't know why this made sense originally. So I just ripped it out and made influence the same. That didn't work, however, as some bones really flew off into crazy-land when I did that. But all the various COPY_* constraints need to have influence left alone. So I did some if/else logic to take care of that case.

Also, many hundreds of my bones are named eg bone.R.001 instead of bone.001.R. This script failed in that case.

This version of the script works for me much better, so I'm sharing it to the world!

9
Which object should be selected when selected to active is check for texture baking?
-2
Rigging - Copy Constraints in Version 2.80 and above
0
Is there a way to copy constraints from one armature to another?

3
Bone constraints not working on first bone in chain
2
How do you script batch changes to bone constraints
5
How do I copy bones from one armature to another?
0
Copy Location constraint is applied to all bones in armature even though I want to apply a different constraints to each bone
0
Copying animation keyframes from one bone to another with flipping
0
Apply transformations to bone after constraints
2
Adjust Bone Roll with constraints