Saving/loading the location(x,y,z) of selected vertices

I have multiple object in blender. There is an object ,lets called it "Obj1" ,which is the object I have to edit ,it does not allow to add/delete vertices ,faces ,edges to it,(require keeping the vertex's ordinal number of that object), all others transform (rotate ,scale ,move) are fine. (but of course we can freely do anything with others object)

i get a hint , but i am still beginer in coding python (i have just started learning when encounter this problem) , so i greatly appreciate if someone can help me to make it complete

This gets the location of vertices in local space.

To write in a file, use normal Python IO routines.

If Vertex Groups and Shape Keys don't address the problem, it is straight-forward to make a script. I'm not sure I understand your constraints but they seem to be:

Rather than writing a script + ui for this, i'd first explore the code needed. I'm going to assume you aren't talking about thousands of vertices, if you do need larger meshes then optimization would help speed up the 'overwrite'

As usual many approaches are possible, i'd start with the one that requires least effort to understand and write. Start a new .blend with a dummy object to represent a simplified version of the objects you are trying to work with in your production files. Get a hang of whether this method works for you or not.

This makes a mesh clone of your original object, gives it a fake user. The fake user flag tells blender not to delete the Mesh when it has no direct users.

This finds the clone and updates the active_object's selected vertices using the previously cloned mesh data.

Here's a small UI version of that script. You can either pick a directory using the selector or paste it in manually. Even if you pick a file from the FileBrowser it will strip the path to just be a Folder/Directory.

It appears in the Misc panel: 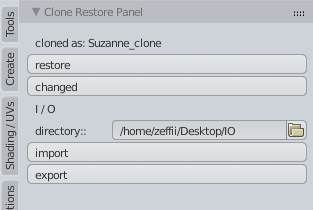 if you have the Suzanne Object selected it can clone the object and make a hidden mesh, or look in the directory provided for a Suzanne.json, which it can load as the clone mesh.

Not the answer you're looking for? Browse other questions tagged python vertices or ask your own question.

1
Scripting - Where is data not shown in the “Info” panel shown?

1
How to get average z location of selected vertices in python?
2
Help with 3D data representation algorythm
0
How to make this script to quickly set specific weights? (Screenshot attached)
2
Location of selected vertex
0
Saving and loading object name location and rotation of a selection
3
Updating a 2.7 script that uses frame_current to work with 2.8+
0
Why have I got an extra vertex when exporting to ply format?