Deforming a maze mesh into a hole

I'm trying to to get this effect : 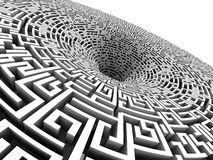 So, the maze should fall into the hole. I have no idea how to go about it. Maybe get it to follow the surface of a torus? (but don't know how). Please help.

I would personally model a piece of the maze and spread it on a surface with Tissue add-on. Just pick the component first and then the generator and click "tessellate". From the add-on wiki:

Tessellate tool allows you to copy a selected object (Component) on the faces of the active object (Generator), adapting its bounding box to the shape of quad-faces. 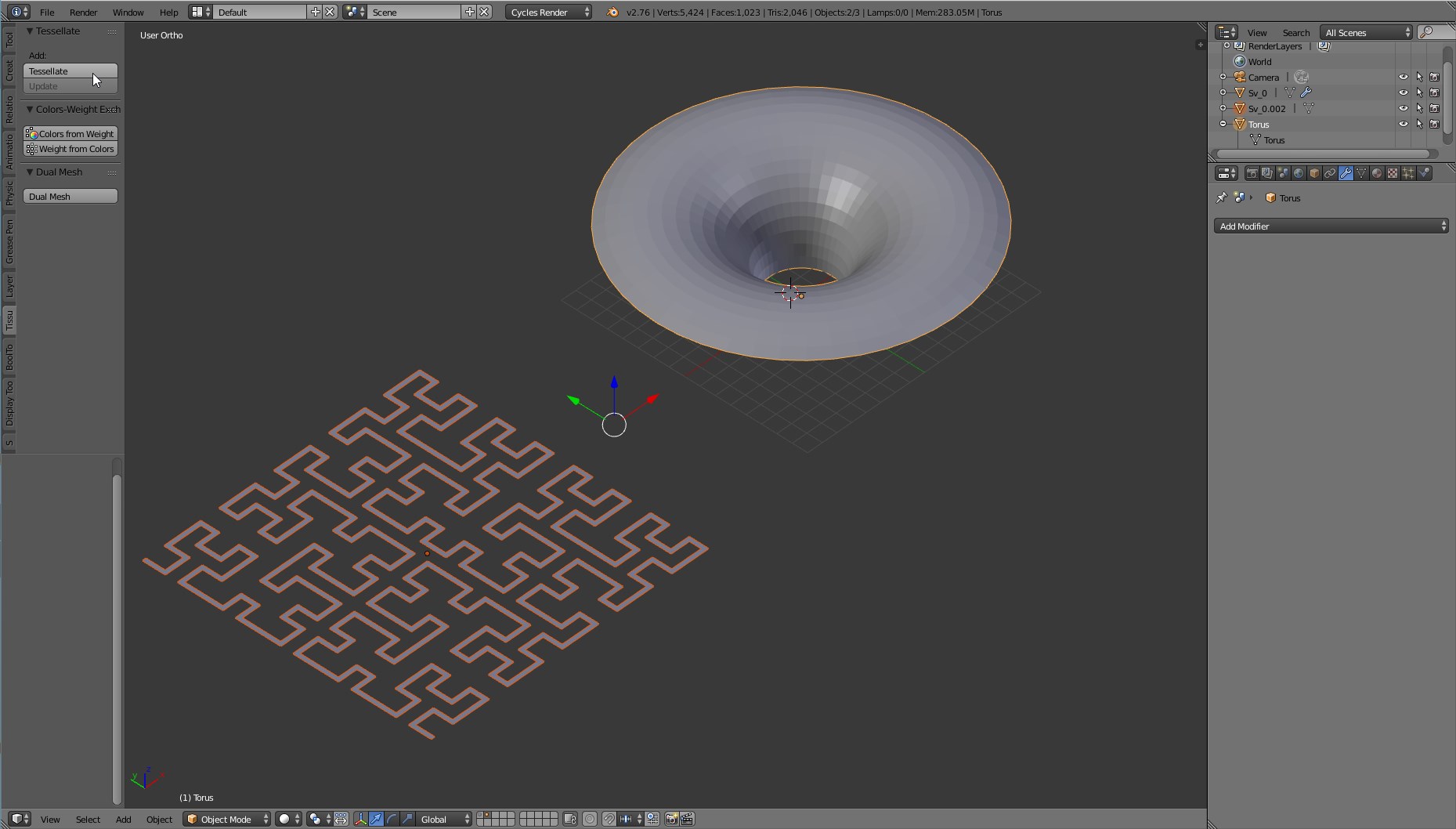 Try to keep the faces of the generator (was made by slicing a torus) as square as possible to avoid distortion. You can improve the component (was made with Hilbert node from Sverchok) to make it more tileable than mine.

Then I'll add a solidify modifier to the geometry only after the spreading to be sure that the walls are perpendicular to the surface. 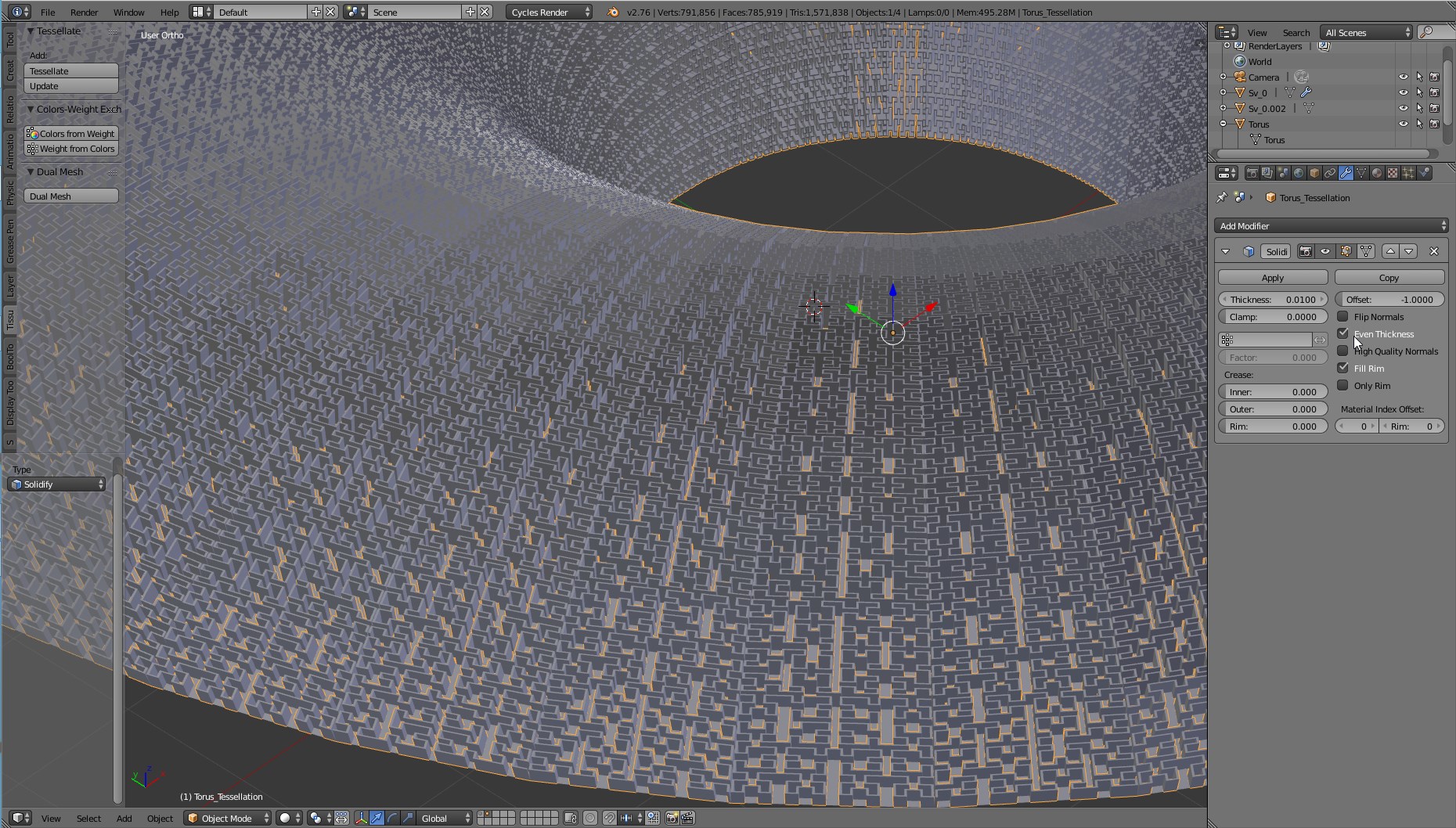 Finish with positioning the camera slightly upon the walls. 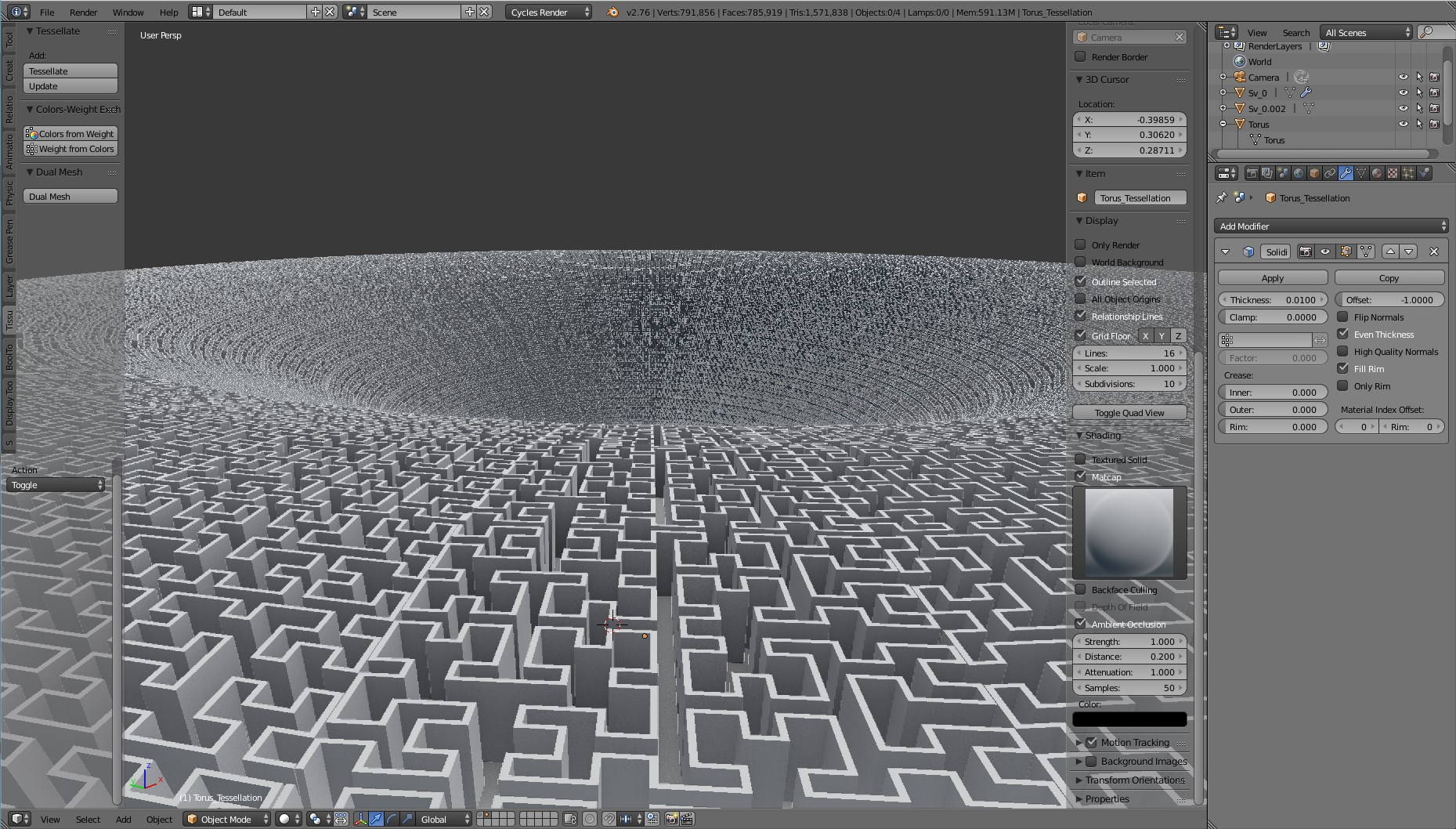 Another option could be to deform a starting flat maze with a sequence of simple deform modifier.

Start by creating the rectangular maze. In this example I imported a svg from mazegenerator, extruded the lines, solidified and than removed the upper vertices of the wall to get only the base contour) 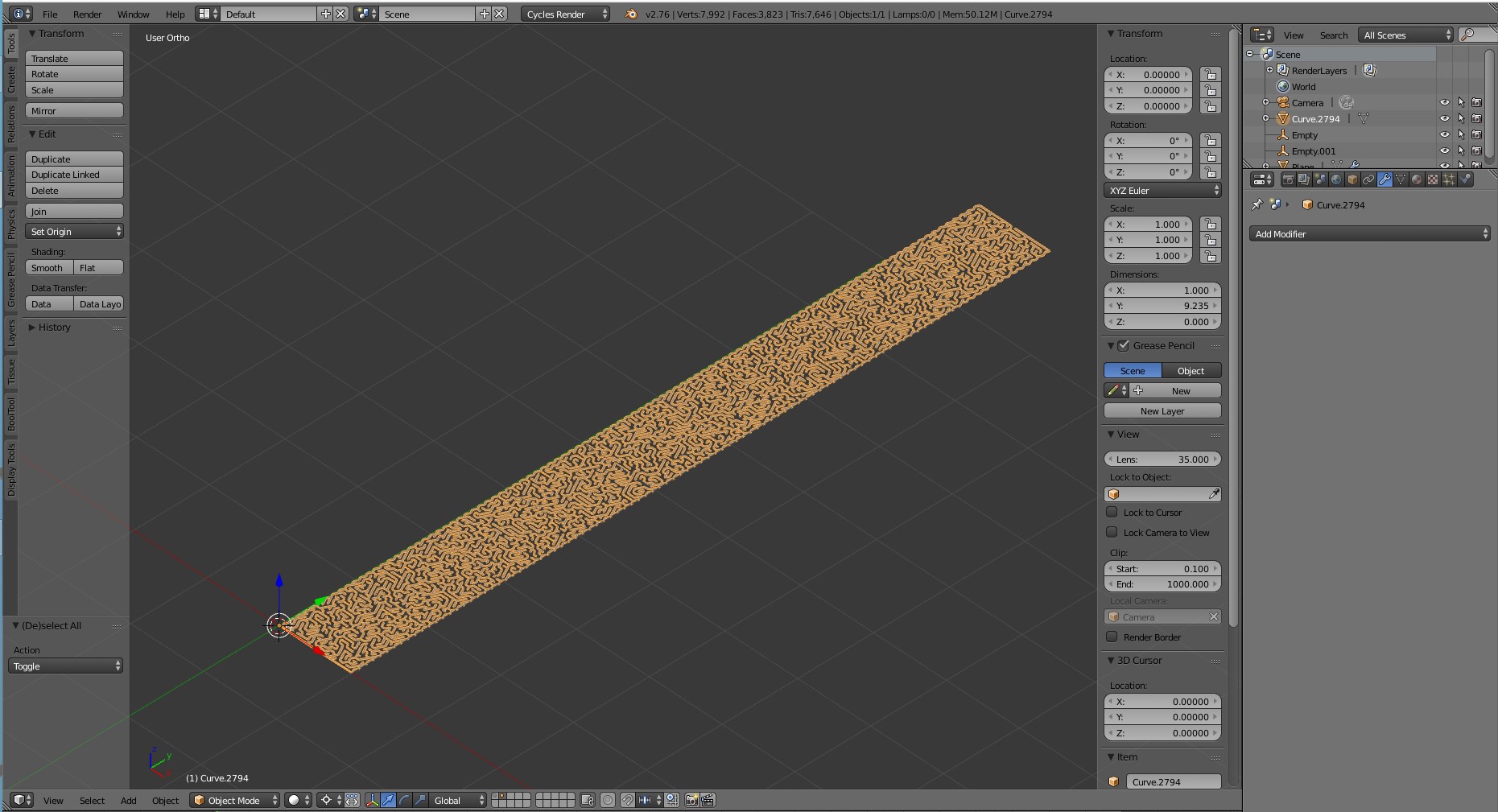 Add an empty, rotate it on the X axis by -90 degree and add to the maze object a Simple deform modifier pointing to the previusly created origin. This way we can force the modifier to get the origin's Z axis as a bending axis. Set the deformation angle to something between 45° and 90°, you can tweak it later.

Above all modifiers I added a Subdivision Surface modifier (set to Simple) to get a quicker mesh resolution and so a better bending of the geometry. 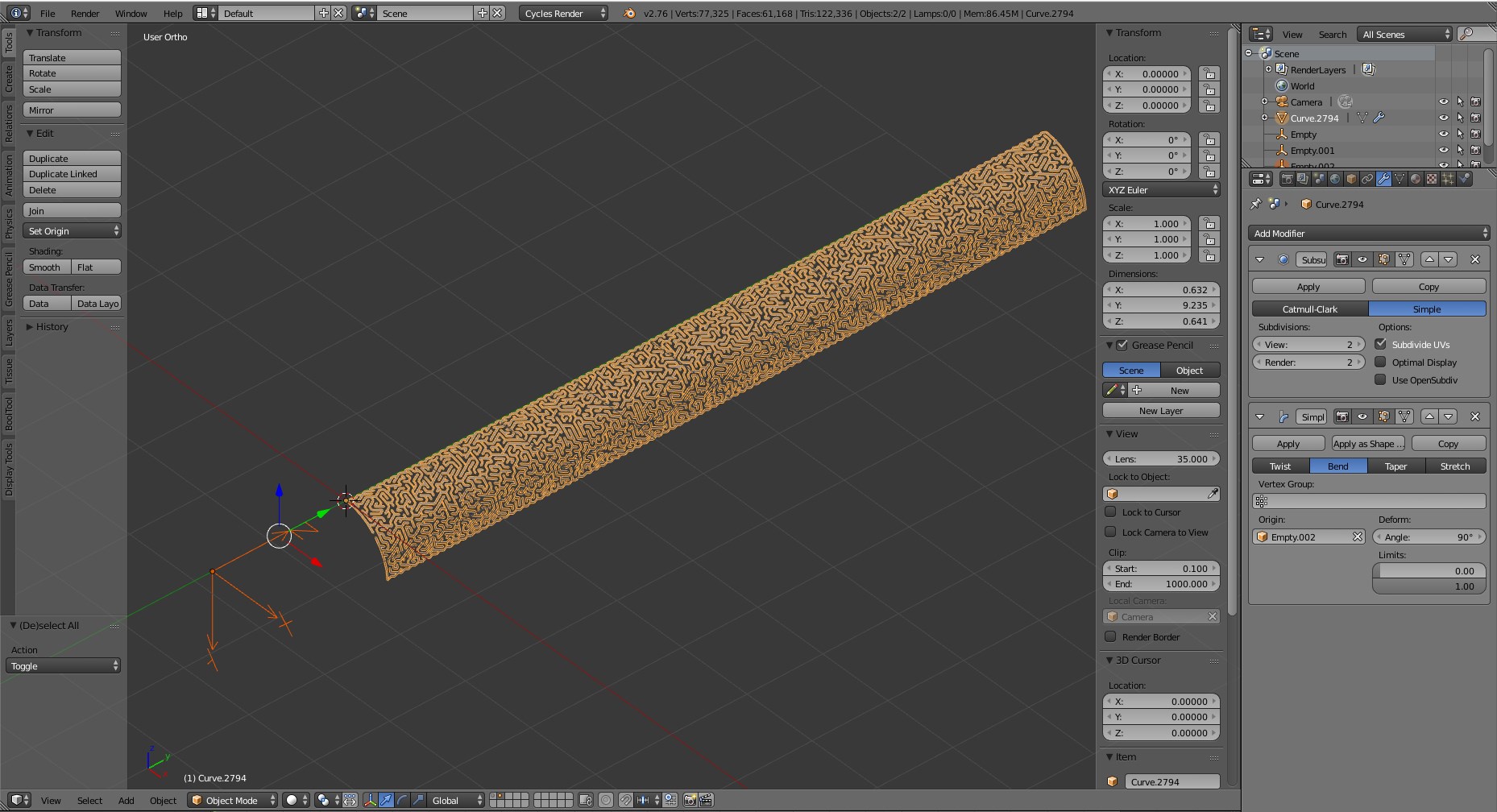 Add now another empty, rotate it -90 degree on the Z axis this time, then add a second Simple Bending modifier pointing to the new empty. Set the angle to 360 degree and move the empty on the X axis till you find the right proportions. 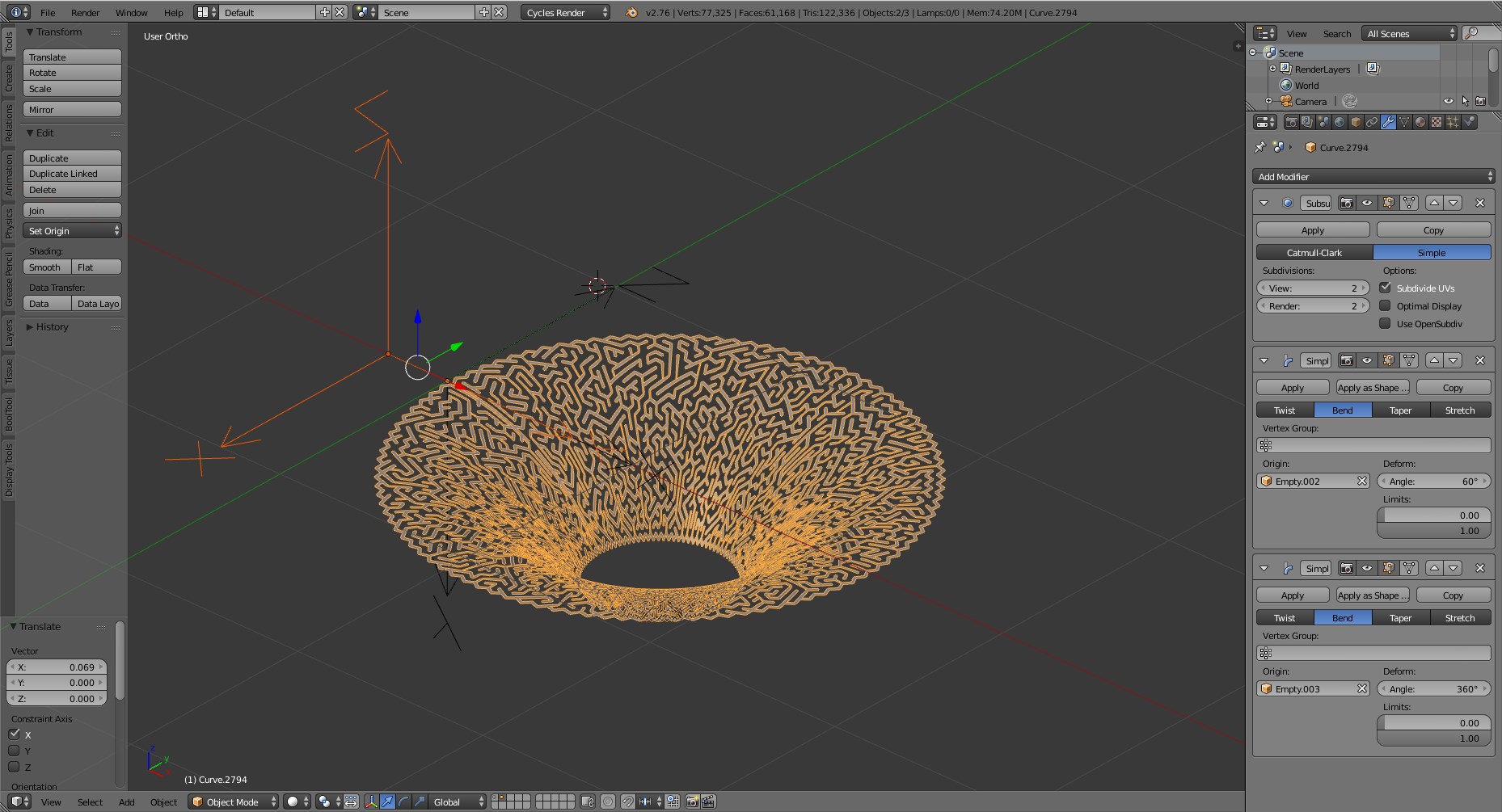 Finish by extruding the walls with a Solidify modifier. 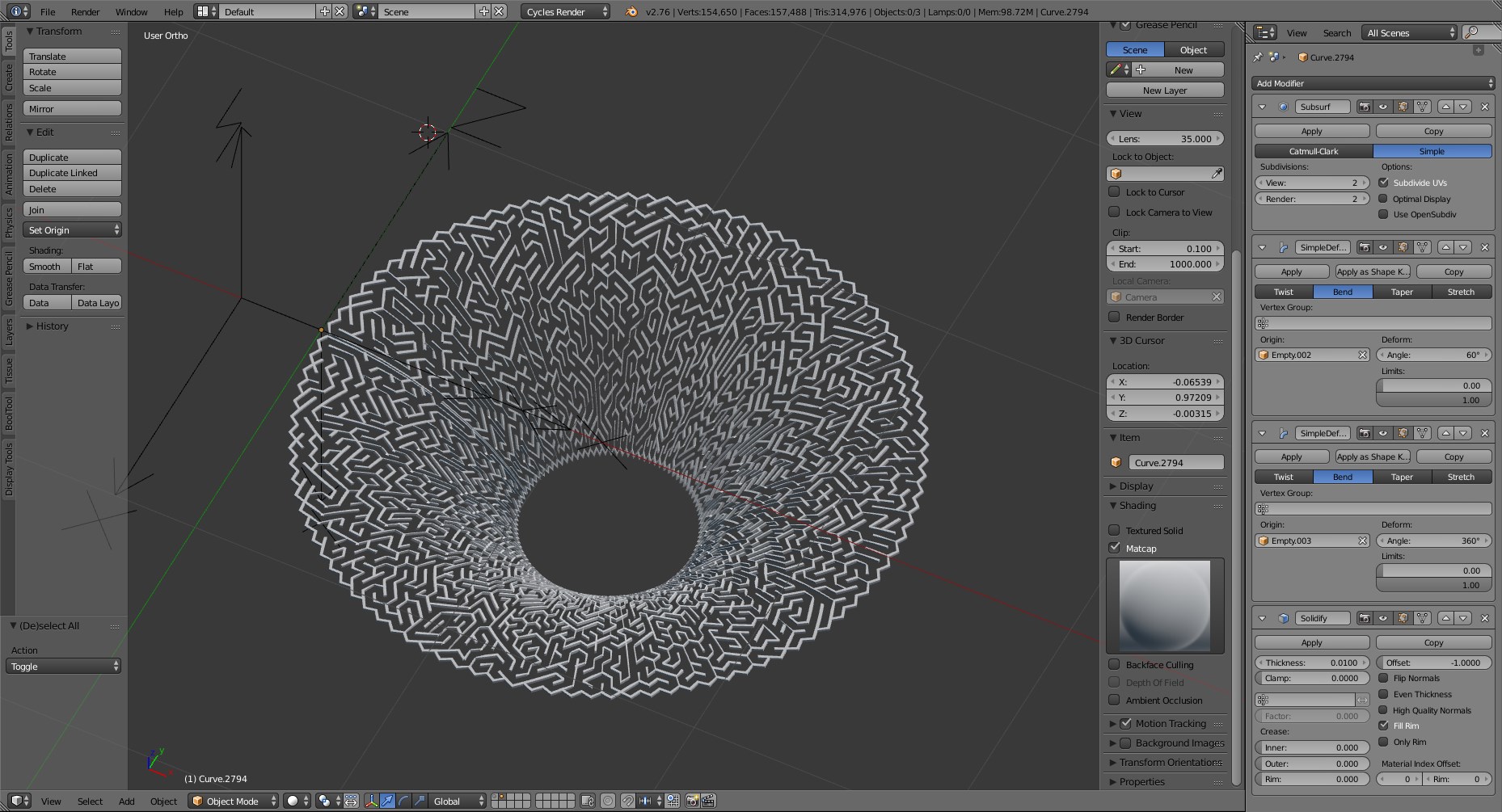 The proportion of the initial rectangular maze and also its density must be calculated basing on the final target shape to avoid any kind of distortion.

Why not simply using the proportionnal editing fonction ?

Here a basic shape (not a perfect maze, but some schematic one ;) I've selected the center vertices 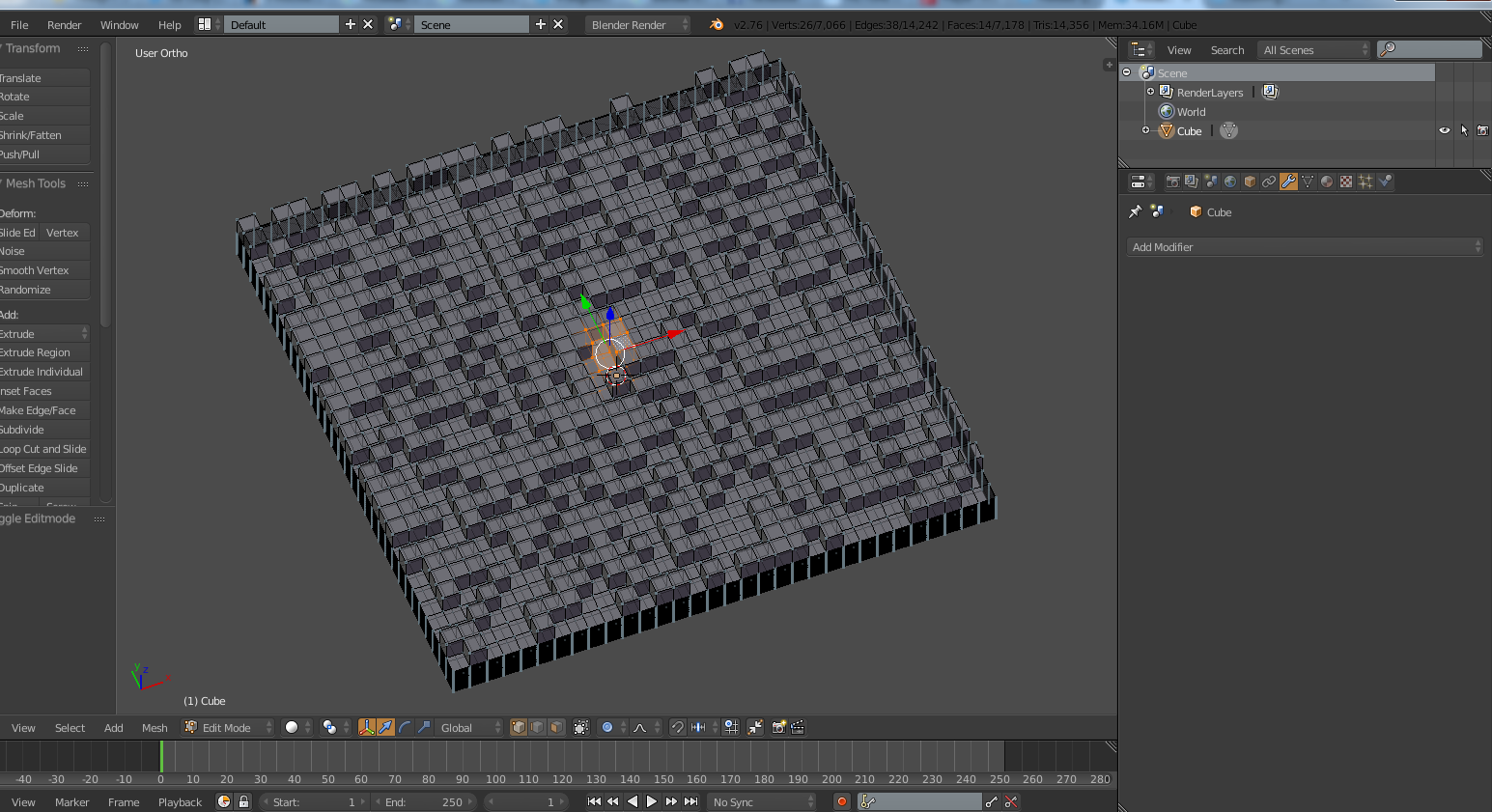 Press O, to activate the proportionnal editing. It allows modifications of the mesh, acting like a magnet, to smoothly deform the surface of the model.

You can activate it from the menu too, in 3d view/edit mode :

And you can adjust the falloff type :

(pictures from the blender Wiki)

Well, while in this proportionnal edit mode, select the vertices from the center of your mesh, where you want the hole. You can adjust the proportionnal edit influence by rotating you center-mouse button, and then you just have to move vertically the selected vertices :

here is a simple example: 2 dimensional cube arrays with an additional lattice to deform... 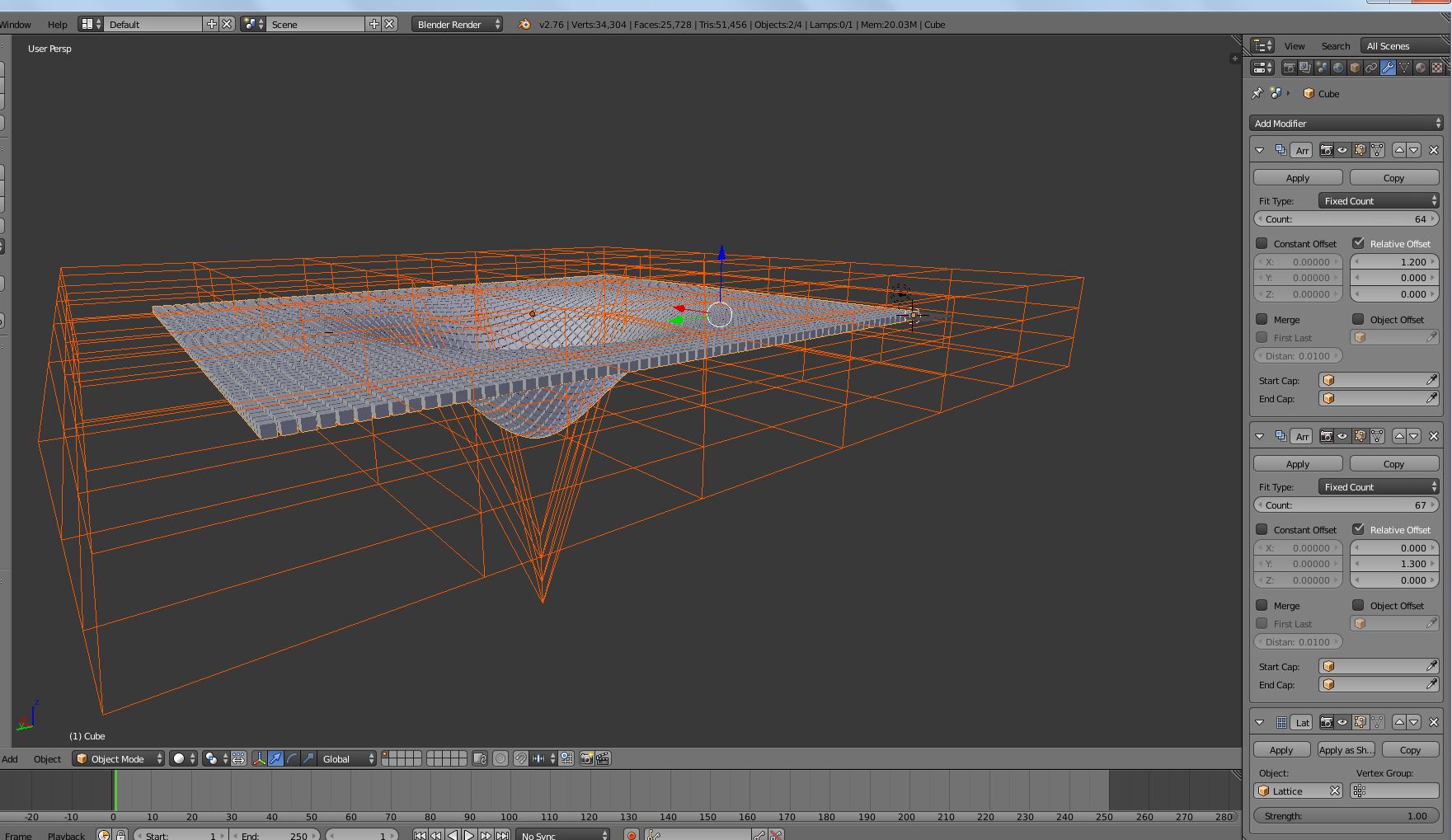 I ended up abandoning my maze model and modeling it from scratch on a torus by extruding faces. This gave me a clean result like so 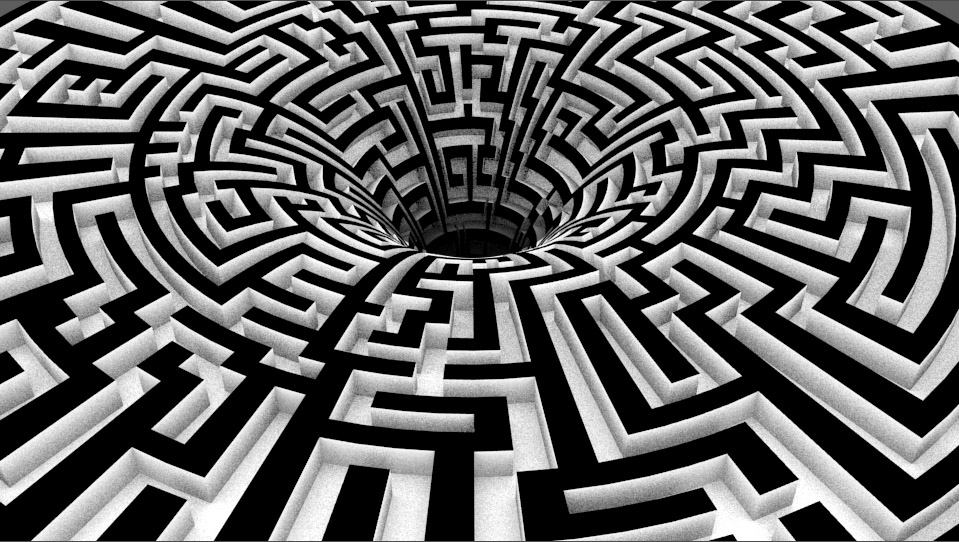 that I couldn't get otherwise.

1
trying to create this texture with blender for 3d printing

2
Preserving shading after cutting a hole
14
How can I close a big hole in a mesh?
2
Trying to make a sphere fall trough an animated opening hole in mesh. Help?
1
Close hole after using screw modifier
1
How can i model these grooves in my mesh correctly?
0
how to create a maze with curved walls