How to make an army-style march with particles following landscape?

I need to set up a quite huge army of characters. My goal is to make them walk inline, rhythmically, and following the shape of the landscape. I know it's possible to make something similar with boid particles, but the best I can do is to make a hord, following a leader particle, but in that case the slave particles aren't walking inline, but more like a zombie group, whereas I need inline walk.

Any idea how to do that ?

Create a flat Lattice and Shrinkwrap it to your terrain. Make sure it has enough divisions to conform to the terrain accurately.

The reason for using a Lattice is that directly Shrink-wrapping a mesh against another mesh when animating will create jittery snapping artifacts as verts latch on to other verts, while a Lattice on the other hand smoothly interprets the curve and makes it usable via the Lattice Modifier.

Create a particle emitter plane and put a Lattice Modifier on it that uses that Lattice.

Animate the emitter plane traveling across the Lattice.

The original animated characters must be on an enabled layer or their animation will not be calculated for their particles.

With just one character model used, the marching looks too uniform. But this can be remedied by using a group instead and having each model in the group have variation in physical appearance and walk cycle.

There's just one more issue to address. You may have noticed some of the troops are scaling the steep hills too quickly. Others have limbs intersecting with one another. These problems can be fixed by using shape keys to deform the vertex positions of the emitter mesh to steer troops away from obstacles:

An alternative to using Shape Keys is to Hook an Empty to their emitter vertex and control them using that. The Empty will need to be parented to the emitter mesh to move in relation to it. 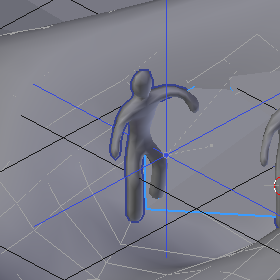 Note that these techniques require the particles to be set to emit from verts, not faces.

0
How do you animate an ant swarm?

3
How can I make particles collide with each other?
0
How would I make a hair particle travel across a surface?
7
How can I prevent boid particles from intersecting?
0
Modify Boid collision distance with hard boundary - v2.80
3
Convert particles to animated mesh including existing armature animation
0
Blender 2.83 - Hair particles with big diameter showing cuts in strands
1
How to accomplish realistic piles of dirt in Blender?
2
How to subframe particle emitter parented to a Bone?
0
Particles Have Ugly Dynamic Painting