Will there ever be support for audio speed control?

My question is simple: I can change the speed of video in the sequencer, but not audio. Will this feature ever be supported in Blender? If there is no such plan, is there some hints of implementing that in plugins?

I haven't looked a lot into Blender API yet, but I would like to do it "the Blender way" if there is one. Currently, I have to render only the audio, edit that using other applications (eg. Audacity), and import back. This is tedious. The simplest way might be just automating this, but I would prefer not to touch the core of Blender (i.e. modify things like Blender source code).

I now have a procedure of simulating this. First, assume I have a segment of audio/video to be accelerated 2X. First, I hard cut out both the audio and video (try to get an even number of frames, call it F. The beginning of the cut is B, and the end E), then do the speed effects on video as usual. Then, on the cut out strip of audio, I change pitch to 2, and change the Start frame of Trim Duration(hard) to the half of current value, then hard cut again at B+F/2 (or change its length to F/2). This will allow you to speed up both the audio and video to twice, but without the need to render the audio strip separately. Very tedious, but very procedural, using only Blender functions. It might be easy to either automate it using a plugin or implement it right into the core. I will check Blender API and code, too.

You can change an Audio Strips speed by changing/animating it's pitch. Though it has to be done independant from your videos Speed Control strip. 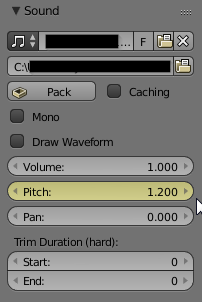 And it will (as it is labled) change your pitch. So if you want to maintain the pitch but only change the speed that has to be done in another audio editor like Audacity.