At 7:25 (direct link), the guy creates a little handle for the door/structure thingy he's currently modeling. He selects a face at the lower part of the mirrored model, goes to extrusion mode (E), cancels extrusion (ESC), scales it (S) and then he decides to remove the lower face.

However, when I follow the exact key combination (shown at the lower right of the video), I end up with that:

Did he somehow 'extruded' the face by moving it inwards? There aren't any keys showing up that might indicate this.

I hope this isn't a stupid question. Blender heavily relies on keyboard shortcuts for efficient working and until I'm not 100% familiar with them, a lot of it is pure sorcery. :)

From the video I see he's setting a mirror modifier (on Z and Y), and that the bottom edge of the face that is deleted is just on the lower limit of the vertical mirror (Z). So the geometry you see below is a mirrored face, mirroring the above face.

The "trick" should be that he has "merge" in the mirror modifier, so, I think that in his model the "deleted face hole" height is in the range of the "merge limit", so the modifier is "filling" the missing area.

If your does not, try increasing the "merge limit" until you get the same effect... (I tried with a simple plane, and with my mesh scale this happens setting a mirror merge of 0.1117) 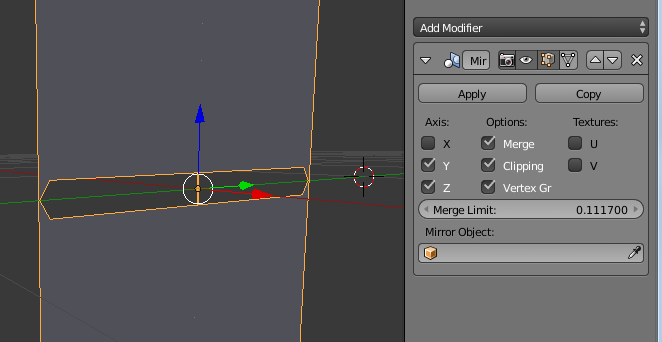 Obviously it is not sane to have a "merge limit" too high, but if it works, this will confirm that it is what he did in the video.

Btw, just after that point he also set the "clipping" so that the modifier prevents him to add vertices below the Z mirror line (while he's dragging the lower edge of the lowest face remained), since there's a mirror, and adding vertices below that line could probably make accidentally troubles in the mesh, without it.

Not the answer you're looking for? Browse other questions tagged modeling mesh modifiers workflow faces or ask your own question.

16
How to fill a hole in face?
1
Punching a Hole
6
boolean modifier leaves cutting edge on face
0
Make a face from a mesh with a hole
1
Hole at the edge leaves empty faces (boolean difference)