How to move objects to new Render Layer?

This question has been asked several times before, but one thing is not clear.

There are Render layers. Each Render layer itself seems to have Scene and Layer slots. It's not clear what each is. Pressing M and choosing the slot seems to move the object to a new Scene slot of the current Render layer of the object. Is that right?

It doesn't seem to move the object to another Render layer. How is the latter done?

The way this works is indeed quite confusing.

TL;DR: M moves objects between layers, which are independent of the many layer visibility settings.

There are 20 layers and several independent places where they can be visible or hidden: 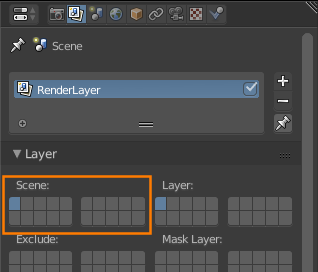 These are the layers which are visible in all 3D views with Lock Camera and Layers enabled in 3D view > Header:

Note that despite being in the renderlayers panel, this setting is global per scene and not unique between renderlayers.

These are the layers visible in that particular 3D view. If Lock Camera and Layers is disabled, this can be set independently of the scene layer visibility. 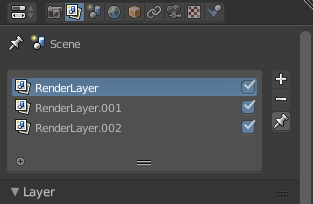 Unlike layers, of which there are always 20, you can have an arbitrary number of renderlayers.

A Renderlayer contains a layer visibility selection which specifies which layers are visible in that particular renderlayer: 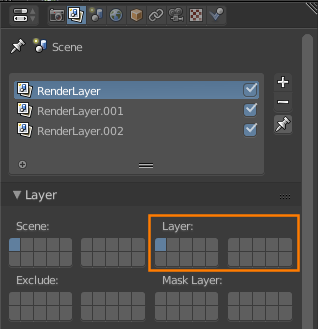 This means that the behavior of the final render can depend on mouse position.

This also means that if all your 3D views have Lock Camera and Layers disabled, the Scene layer visibility doesn't do anything.

Not the answer you're looking for? Browse other questions tagged rendering blender-internal-render-engine scene render-layers or ask your own question.

12
Is it possible to use more than 20 layers?
2
How do I batch render the render layers that I have set up?
2
Blender cycles CUDA out of memory error in archviz scene
2
How to move an object to a different render layer?
2
Cycles render won't render one object
0
Object not rendering again

2
Render layer confusion
0
Shadow catcher layer for After Effects not rendering
4
How to render separately multiple objects on the same scene, without using multiple render layers?
1
Object doesn't render - layer conflict?
3
How to render only one render layer?
1
Cryptomatte & Render Layers: is it possible to recover Cryptomatte from a .PNG sequence?
0
Disable Object's Camera Rendering for one Render Layer only