How do I move an object with a curve modifier applied to it?

To start, I have an example scene setup illustrating my setup.

I have a round-ended cylinder that I've applied a Simple Deformation to taper it, and then a Curve to make it into a hooked claw or talon shape.

This claw is going to be used 20 times, adding claws to a figure (not included in scene). The claws are to share the same UV map and vertex order, and will share a bunch of other fiddly little shape adjustments. But, if I make a Linked or Object duplicate of the claw and try to translate and rotate the duplicate to where I want one of the finger or toe claws to be, it instead slides along the curve modifier.

I want to have 20 claw objects of various different origin points and XYZ rotations (and scalings!) to all have their curvature driven by one curve object, so that when I adjust curvature, they all stay in sync.

If I bake the curve in by Applying it, I can't adjust the curve any more. I can't bake the curve as a Shapekey, it's not on the top of the stack of modifiers and the Simple Deform: Taper will probably want to be adjusted for different variations of the claw. Anyways, curves/rotations are terrible as shape-keys.

Should I be using another approach? Is there a way to make the duplicates make a real linked duplicate the parent mesh, where the only things I can adjust are the Transforms from the object view?

If you select both the claw and the deforming curve and press Alt+D to do a linked duplicate of both of them, wouldn't that fix it?

You can then move the claw to a new position by selecting the duplicate claw and the duplicate curve, doing any transformation you want to both of them.

Because you did a 'linked duplicate' you can then still edit any of the curve objects and they will all update.

Here I have duplicated the curve and claw several times (using 'linked duplicate'), scaled them, moved them and by going into edit mode of a single curve I can edit them all at once: 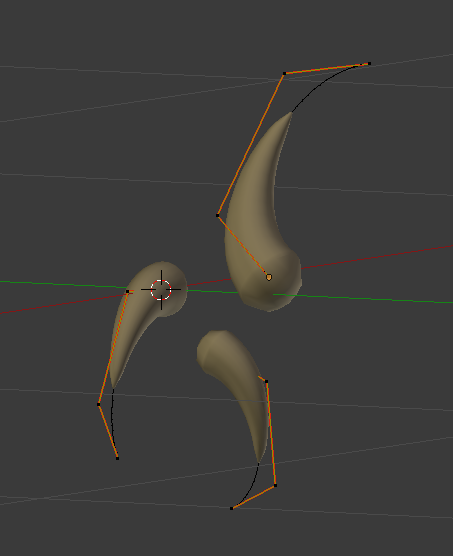 Not the answer you're looking for? Browse other questions tagged modifiers bezier-curves instances or ask your own question.

3
Bending with Lattice modifier
2
How can I make a linked duplicate path with other bevel object?
0
How do I make edges on a curve have equal length while maintaining the rough shape of the curve?
1
Drawing a simple arch with the curve tool
1
Object getting rotated with the Array + Curve modifier