How to make a F-curve with a constant and linear part? 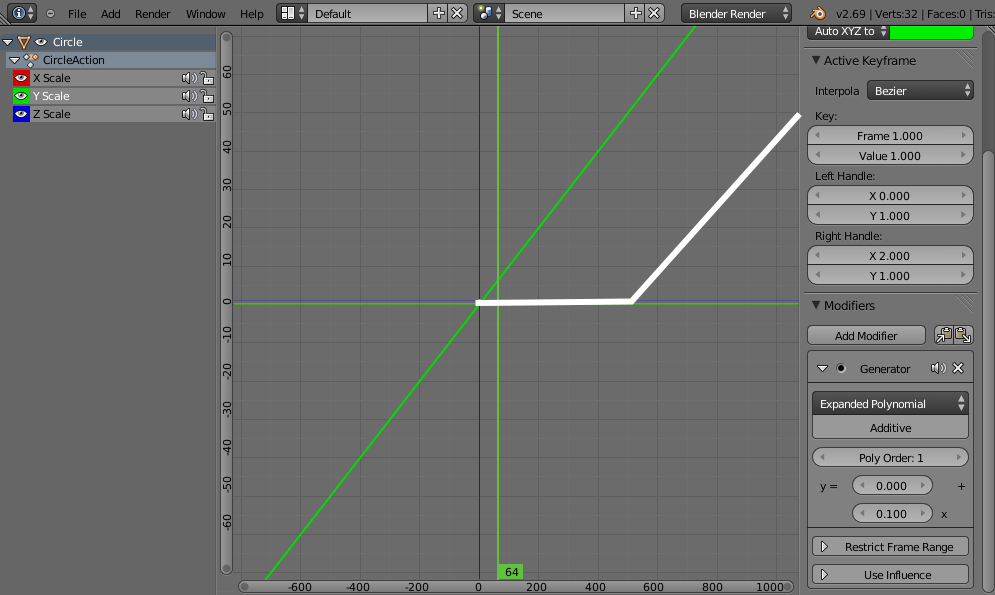 As part of a problem I need to obtain a curve in the graph editor, that has a constant part , followed by a linear one.

I tried under Add-Modifier>Generator, but the closest curve I found was only a y=mx+n curve. There is also the option of using python to shape the curve, but I do not know how. I assumed, that maybe it could be possible to draw the curve by hand, but it does not seem so.

How would you make a F-curve that looks like the white one in the picture ?

Here are a few ways I can think of.

Also, as suggested here How to change the inherited F-curve independently from the original one ? , I recommend you look at the NLA editor, especially for offsetting the start of actions.

Not the answer you're looking for? Browse other questions tagged python bezier-curves graph-editor mathematics or ask your own question.

0
How to change the inherited F-curve independently from the original one ?
0
Blender Graph editor Continuos animation

0
How to change the inherited F-curve independently from the original one ?
2
Working with bezier curve, I need to fill the hole at the end
4
Linear curve to wave curve
0
How to insert the coefficients of a f-curve in Python?
0
Where are the Settings for F-Curve Modifiers?
1
How do I change the interpolation of multiple keyframes in the graph editor (f-curve)?
3
How to free hand draw curve object with drawing tablet? 2.8
8
Is there a way to grow this curve at a constant velocity?