Is there any way to stop Z-fighting besides remove doubles?

Let's say you were to create a line 2 m long in blender, then create a 1 m long line in exactly the opposite direction so that edge z-fighting occurs. Is there any way at all to tell Blender to automatically cut the 2m line into 2 1m segments so that the line still has 3 total points, but doesn't display z-fighting? I've tried removing doubles but it doesn't really work in this scenario. I've got a lot of overlapping edges that is causing annoying z-fighting.

I'm making an aerogel collector for a Stardust SRC model but since I'm a beginner, I ended up making the aerogel grid very sloppily. I had to manually fill it myself, and I filled as many of the grid pieces as I could to try to prevent Z fighting, but there's still some going on.

And how do I fix weird shading? (picture attached) 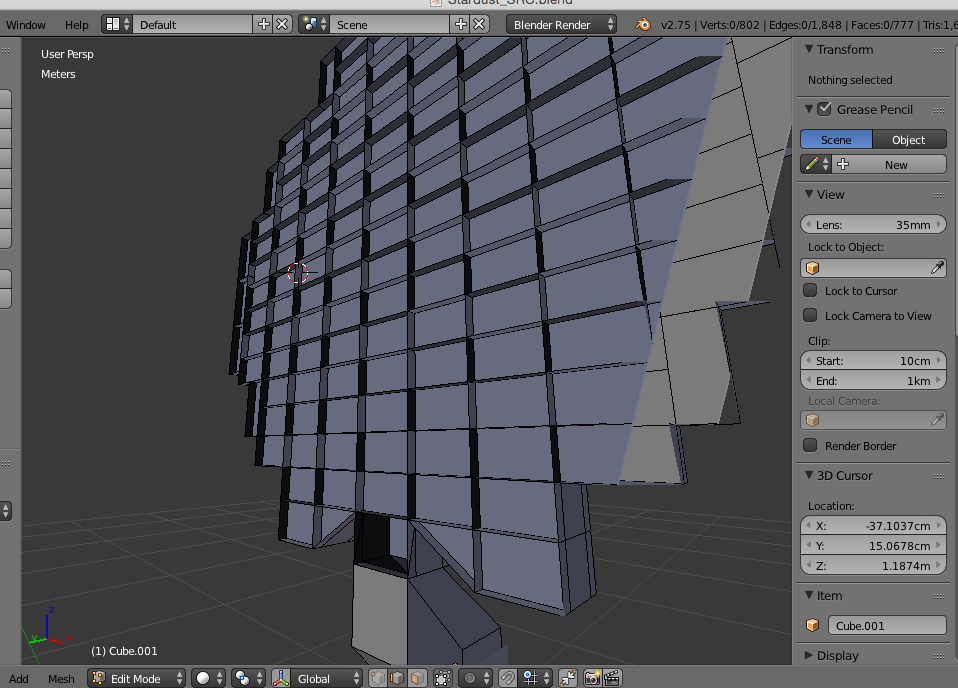 No, I don`t think there is another method to get rid of z-fighting. If remove doubles does not work, try increasing merge distance in the input field that appears after using remove doubles:

As for weird shading just try to get your normals right. Toggle into Edit Mode, select all faces, then hit Ctrl+N in order to make the normals consistent. For those faces that did not get fixed, try flipping their direction by selecting them and clicking flip direction in Shading/UV tab of the Toolshelf (T):

Not the answer you're looking for? Browse other questions tagged mesh edges faces or ask your own question.

7
Is there an easy way to remove overlapping faces?
8
Remove Doubles on multiple objects
2
Is there a way to automatically remove ngons?
0
I have doubles, and remove doubles won't delete them
0
Create strip around floor area
3
Is there any way to remove edges causing a loop?