I have a car model I am rendering. I have several render layers I am compositing. It is simple enough to render and output the animation, but I also need to render the same animation from two different cameras. Furthermore, I need to also render from the same two cameras but with the car being a different color.

I am going to use a Python script to render all of the scenes instead of me having to hit render for each one, but I cannot figure out a good way to create the scenes for the other color of the car. If I link the scene, changing the color changes it for all scenes. If I make a full copy of the scene, I could have the color be independent, but then I have multiple copies of cameras and everything.

I wonder if there is a way to make a material color change depending on which scene is active or being rendered. Any ideas?

(I am using Cycles, if that matters.)

EDIT: Here's a basic setup to see what I am wanting to do. If there was some sort of switch or script that would select the Blue node if rendering Scene1, the Red node in Scene2, and the Grey node for Scene3. 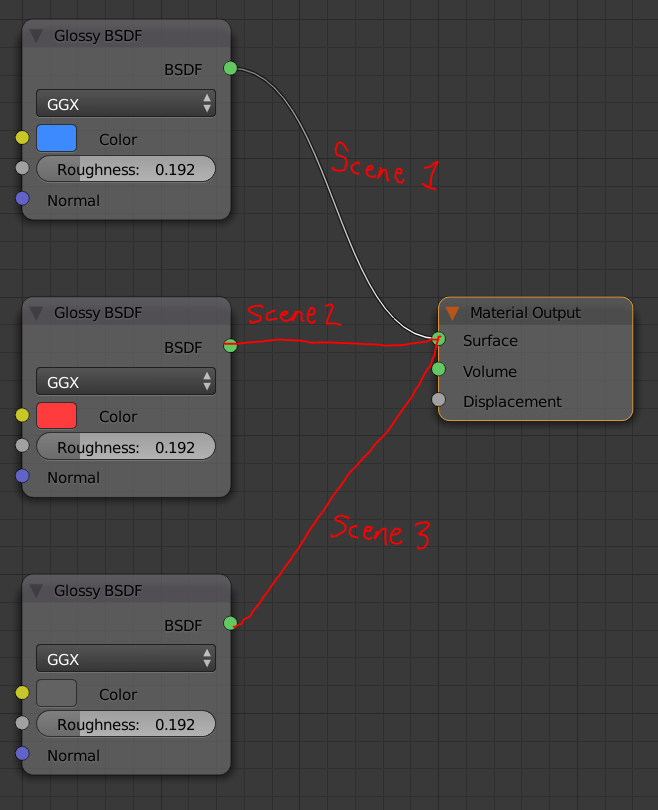 If you can afford to actually make a copy just of the car object, you can have two objects with the same settings but different material. For this you need to switch the material from Data to Object, otherwise it still has the same material for the same mesh.

However, if you can't copy the object you may have to do some python trickery to get it working. Below you'll find a quick test using a scene_update_pre handler function. This is called when the renderer updates each scene, so you can use it to switch colors or do anything else needed. You will have to adjust the handler according to your blend file and material setup.

5
Can I set render settings by individual scenes?
7
Multiple scenes and material with pass index
1
Multiple scenes with the VSE?
2
Composite two scenes for only a short period?