Why is my footage smearing out towards the border on rendering an image?

Dumb question - tracking footage, having border smear problems... So, just tracking some of my own footage for the first time and as I'm approaching my first test renders, I've encountered some weirdness with the boarders of the image - smearing in previews, transparency in render. Obviously, this is not my intended result!

I've a horrible feeling I've set my proxies up wrongly - and that I should immediately know what the problem is here... but I cannot remember the solution! Can anybody jog my memory? 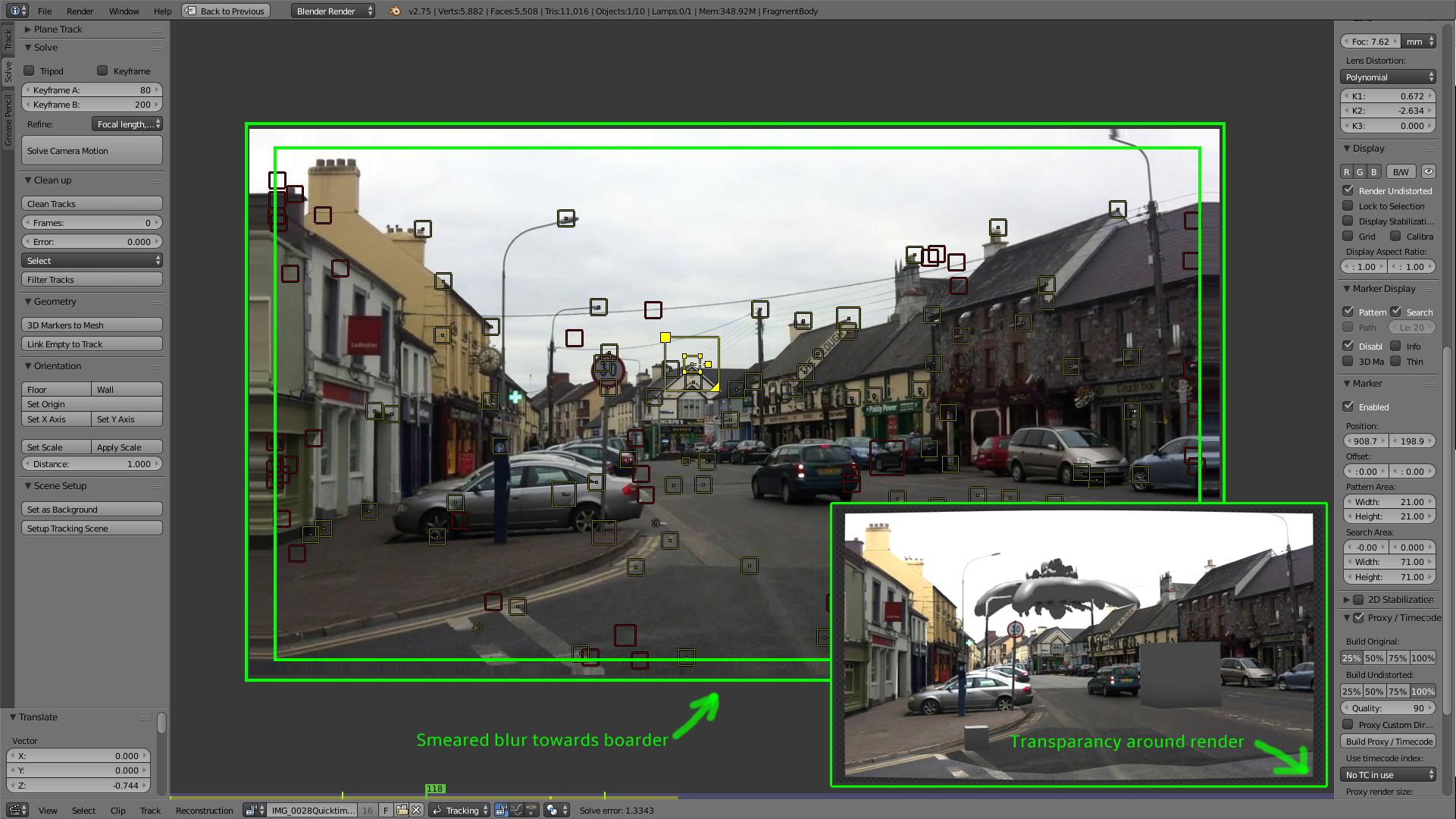 The smearing on the edges is perfectly normal if you are undistorting. It's most notable when the lens distortion is the pichcushion type. Blender is deforming your image, and it fills the missing parts with the color of the last pixel on that row or column, since there is no other way to reconstruct the information of things outside of the image limits.

Here's an exaggerated example to illustrate the point:

Other programs do give you the option of making the edges transparent or black. Blender does not (As far as I know).

To solve the issue you do have a couple of options:

1- (The lazy and lossy option): Resize the undistorted image in the compositor so that the smearing at the edges doesn't show.

The downside is that you'll loose some information and the image might degrade with the re-scaling.

2- Work with undistorted proxies as a reference to create your 3D scene, but for the final render bring back the original (distorted) video and distort the 3D scene to match the distortion of your lens:

You loose no information and your 3D scene will follow the distortion of your original video.

Not the answer you're looking for? Browse other questions tagged rendering compositing-nodes tracking or ask your own question.

0
I'm getting a distortioned weird effect when ''Setting up the tracking scene'' in my movie clip editor
36
Best place to put bug reports?
29
How to determine lens undistortion values for motion tracking?
0
How to stop background video stretching?
0
Weird warping of render image in Camera track

5
Interlaced footage in the motion tracker?
2
Why are objects appearing as a "ghostly" image after rendering?
3
Why is the base of the object fading in and out during rendering?
2
Efficient method of inserting an image into the horizon of handheld footage
2
Render out of compositor without rendering scene?
0
Why is my rendered animation showing a hexadecagon border around my image?
0
Compositor Blows out Image