How can I use the compositor on the result of the sequencer?

I recently ran a renderfarm on a file with some compositing setup, but I forgot to set the composite output back to the Composite node instead of the Viewer I was temporarily using. Since the node setup didn't require anything besides the image data (i.e., no Z-buffer, object IDs, etc.) I figured that I could just run the compositor on each frame individually. However, this proved to be somewhwat difficult.

It seems that the sequencer is run after the compositor (despite their non-exclusivity in the Post Processing panel), so my idea to use an image strip in the sequencer for all the images that I already rendered didn't work—the render just copied the images into a new directory.

The Movie Clip node doesn't seem to accept an image strip as input, either, so that was not an option.

What I ended up doing was sequencing the animation to a movie file, then piping that into the Movie Clip node in the compositor. However, this required extra time, extra storage, and it rendered the default scene every frame before compositing, only to ignore the result.

Is there a way to use Blender's compositor either directly on an image sequence, or in conjunction with the video sequencer? 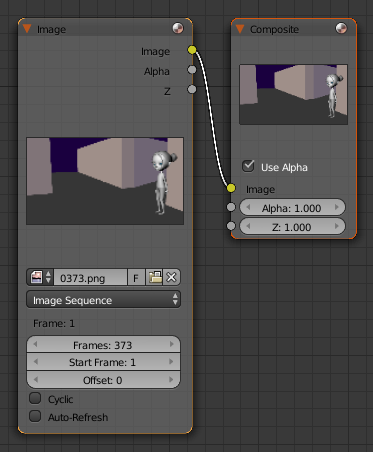 To import a movie clip, its the same thing, just change Image Sequence to Movie Clip, and open the Movie! This also works with compositing effects.

JPMCJPMC
4122 bronze badges
$\endgroup$
Add a comment  |
2
$\begingroup$
Want to improve this post? Provide detailed answers to this question, including citations and an explanation of why your answer is correct. Answers without enough detail may be edited or deleted.

I found it is also essential to deselect the sequencer in properties under post production before doing any image sequence compositing.

Not the answer you're looking for? Browse other questions tagged compositing-nodes video-sequence-editor or ask your own question.

1
How would I composite my rendered animation
13
Color correction in the compositor from the video editor
7
Can I add the output of the VSE as input to the node diagram?
3
How to use video's edited in the video sequence editor in the compositor