How to use emitter for generating thick forest so that trees would not intersect?

I am trying to make thick forest in blender using emitter or hair emitter. The problem is that with huge ammount of trees they intersect with each other and I do not want that to happen. I did use various setting, groups and tricks without success. Does anyone have idea how to make it work? Here you can find blend file

I would suggest to disable Emit in Random order. 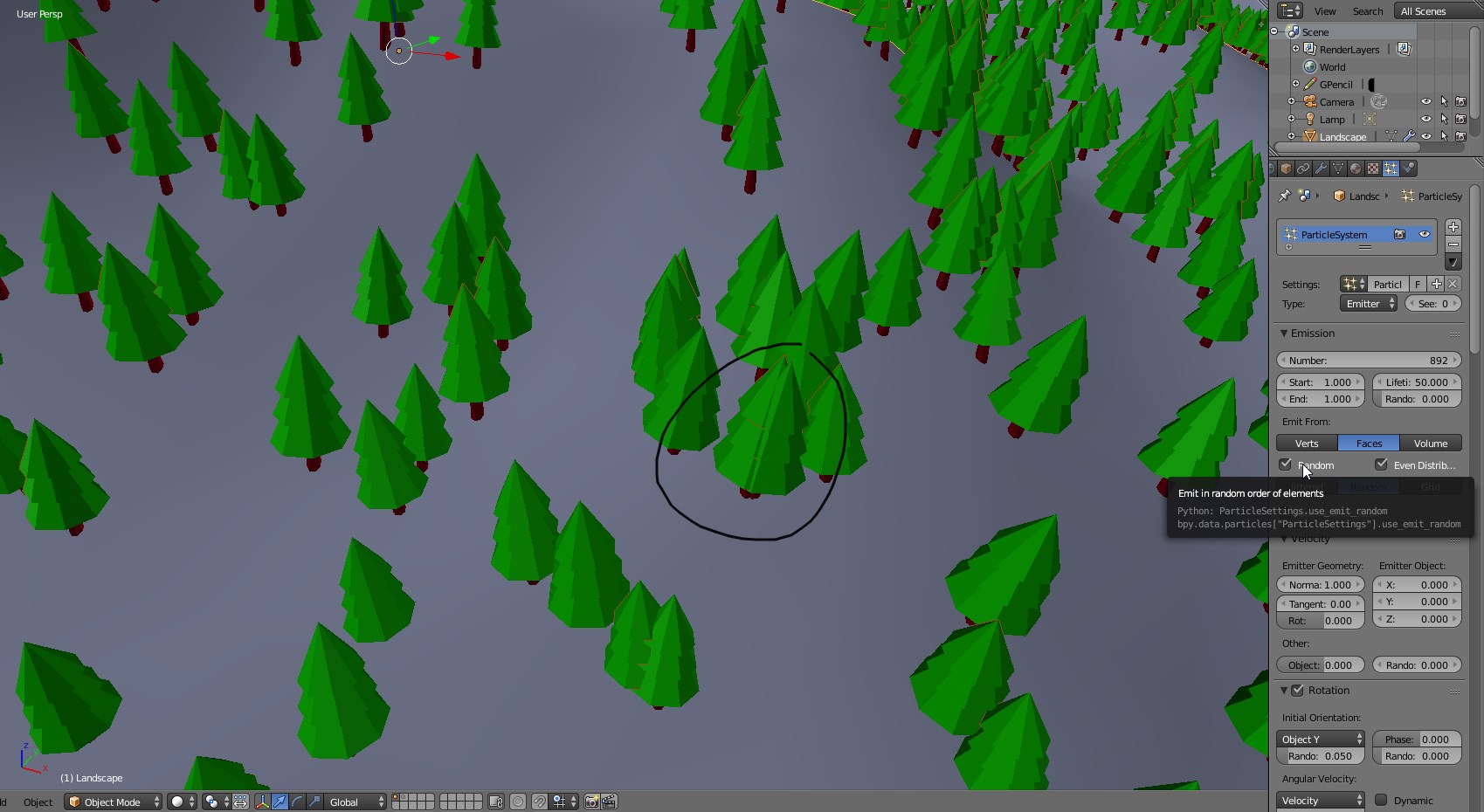 Particles in this case are emitted from faces. Every faces has it's own id. With the Random opton enabled you are asking Blender to pick a Random face id to generate the next particle.

In this case, where your simulation does'n run trought time, means that is very likely to have a particle create in the same place of another.

Let's say you have 100 faces. First random id is 1, so a tree is generated in Face1. Than pick another id, randomly..it may occour to pick the same id..1, so the generated tree will be overlapped to the previous one. It may seems that you have a low probability to pick the only 1% that is already came out, but you have to consider that for each particle cration iteration, the number of "free" ids lower, so when you are at half of the particle cration, you'll have 50% probability of overlap.

If this effect is not very strong is because you have also Random distribution option enabled. 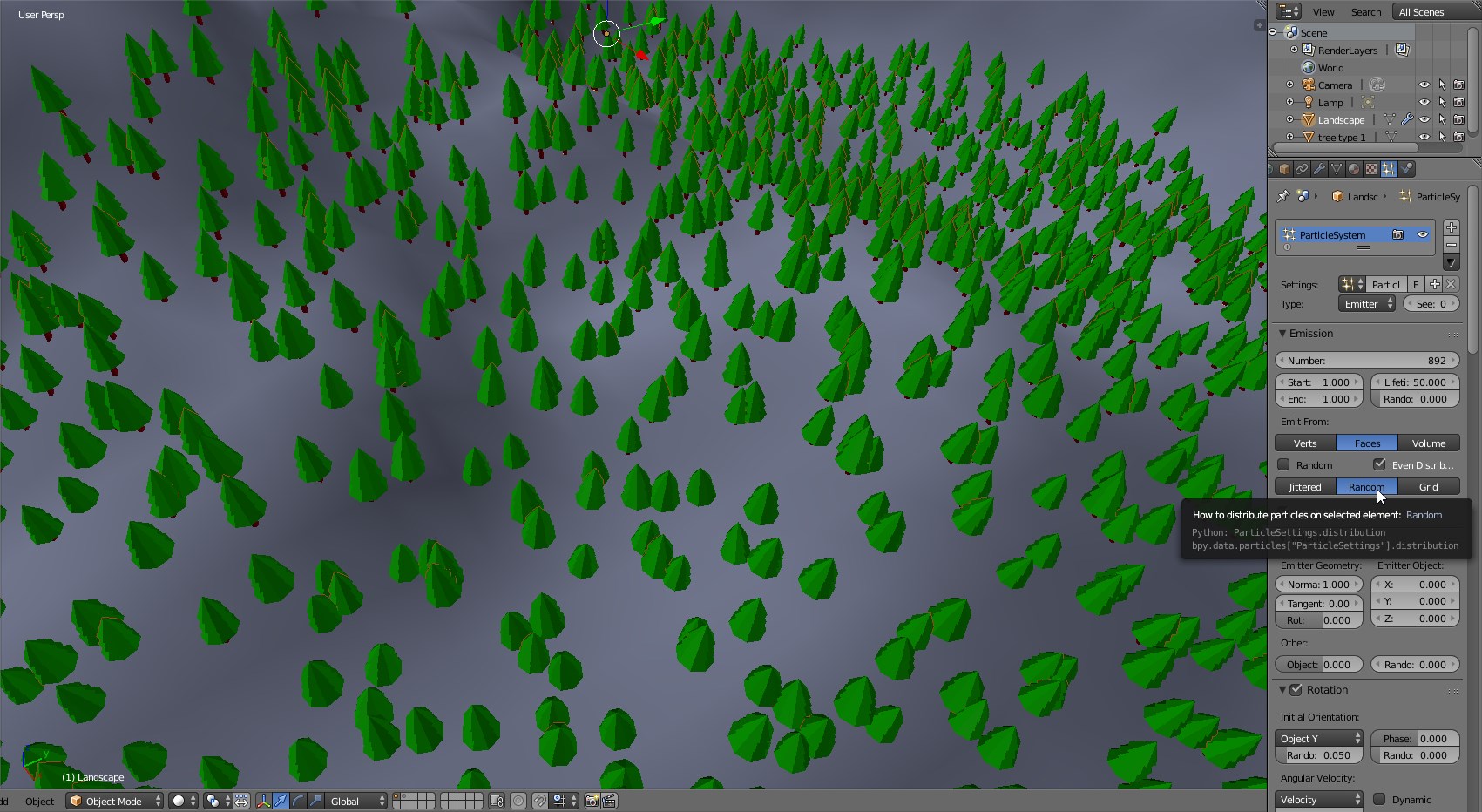 With that, you are asking to position randomly the created tree on the face. So , despite they are created on the same face, the might have different location. On th other side, it may occour that two tree of born in adiacent faces, let's say along the common border, will be very near, causing overlap.

Particles generation is not aware of where other particles have previously been generated (it would be very high computing demanding for large numbers), so for now it is not possible to have a random distribution without any overlaps.

One possible workaround can bw to subdivide your mesh till the faces are almost the size of the trees XY bounding plane. Now you should have about 2000 faces in the "forest area". If we put without a tree in the center of each faces we would be able to create about 2000 trees without any overlap. 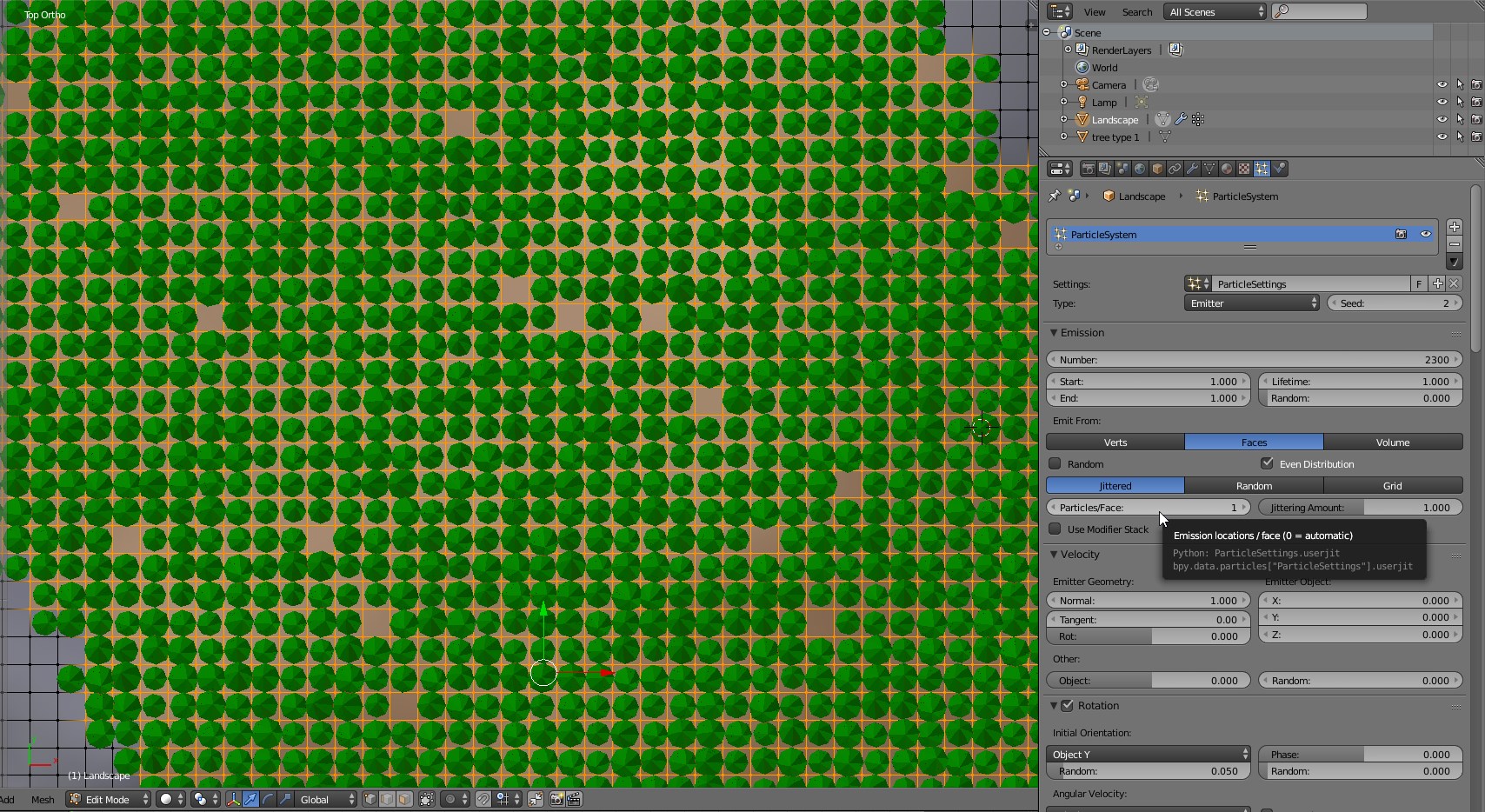 This obiuvsly resamble more to a plantation than a forest, but by lowering the amount of trees and the use of voronoi density map: 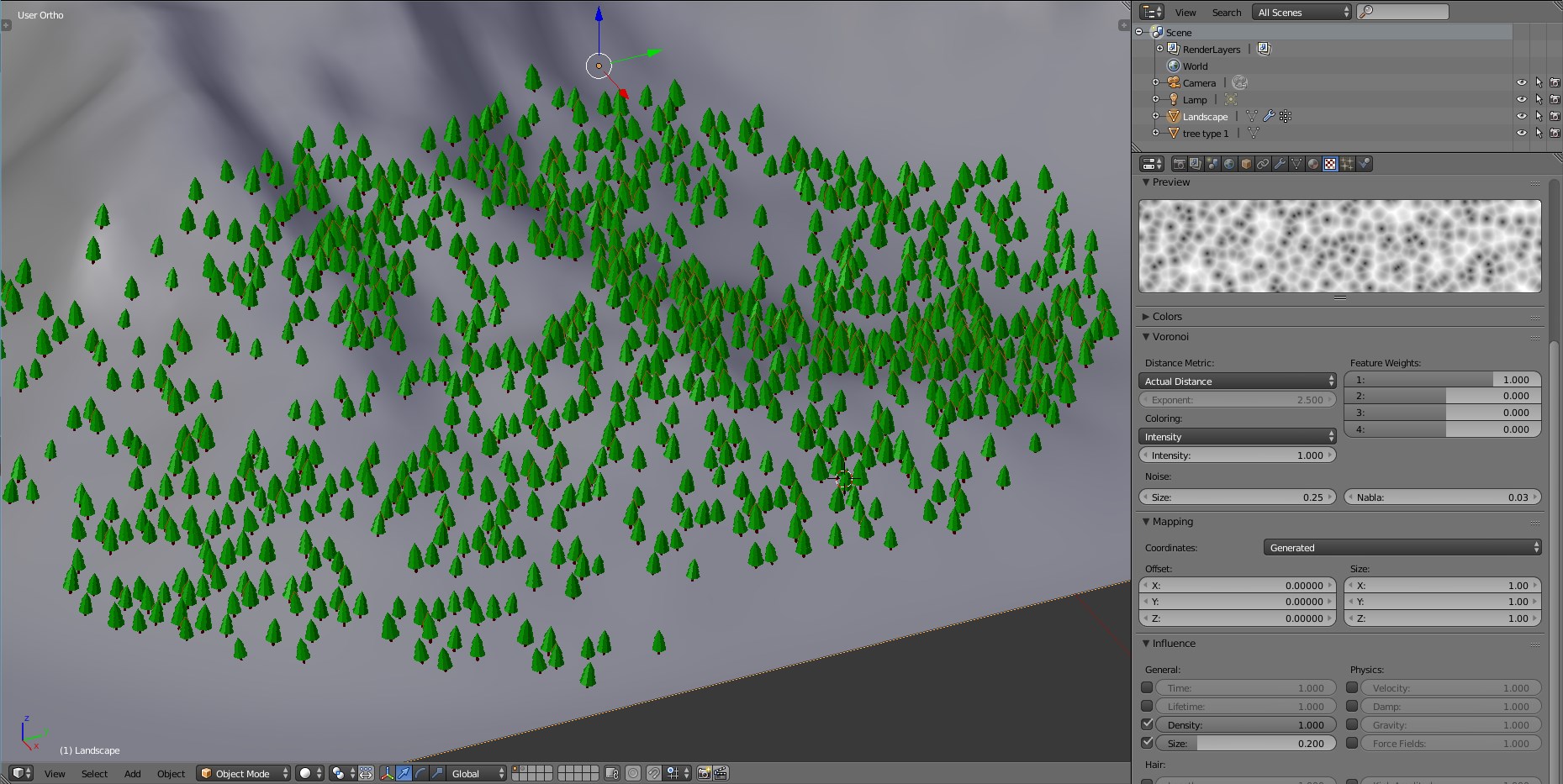 you should be able to dampen the "grid" effect a bit.

Since the coming of Geometry Nodes we have some tools that can be useful in distriubuting points onto a surface.

From the page manual about Point distribute node

Poisson Disk: Distribute points randomly on the surface while taking a minimum distance into account.

You need to set a minimum distance to ensure some room between the particles. 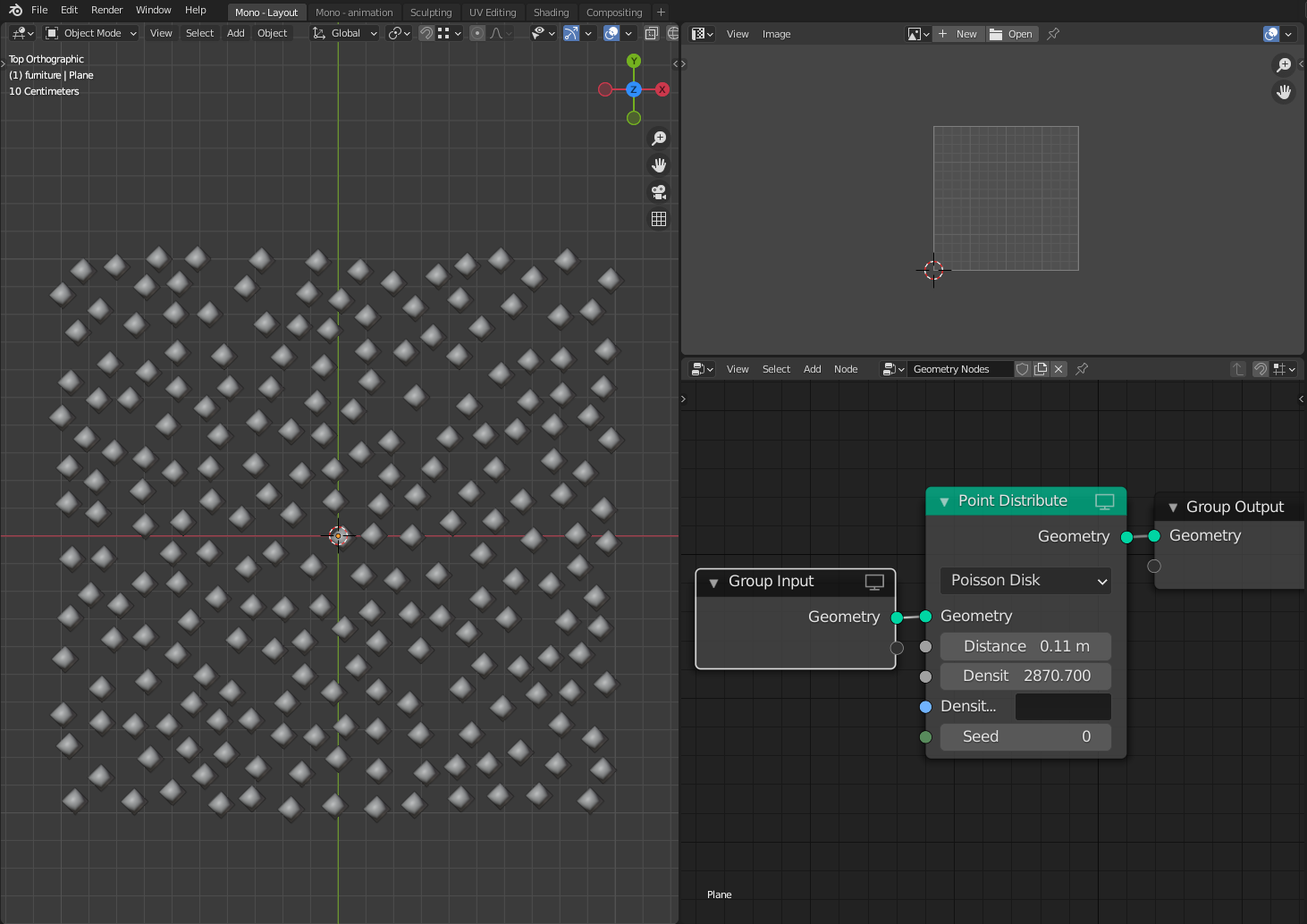 13
Set minimum distance between hair particles
4
how to make forest with different types of trees
3
Removing overlapping objects, made with particles
2
How to stagger particles to prevent overlap?

16
Convert large particle system(s) to one object efficiently
10
Rotate (group) objects outwards on spherical particle system?
7
Which particle system is best for trees in a forest?
5
Particle System, objects emitted colliding
4
how to make forest with different types of trees
2
How to use an invisible emitter as mask for its particles? (Cycles)
1
Why is my particle system rendering differently on my cloud rendering service?
2
Blender (2.91) modular tree addon, with particle system the leaves do not show up
1
Why is my hair dynamics going crazy?