How can put a mesh into a different position?

I'm trying to overlapped and solidify object in a simple example, to plan maxillo facial surgery. The idea is to put the jaw with the teeth into an other position during the surgery. So I would like to "tell" to the lower jaw that I just cut to "move into this position and to stay there".

In this exemple, I would like the teeth from the back to overlapped the teeth in front of them (mirroring lower jaw in the good position). Is it possible to do it by selecting region of interest (like the top of the teeth of the back) and show to Blender the similar point in the mirroring teeth? 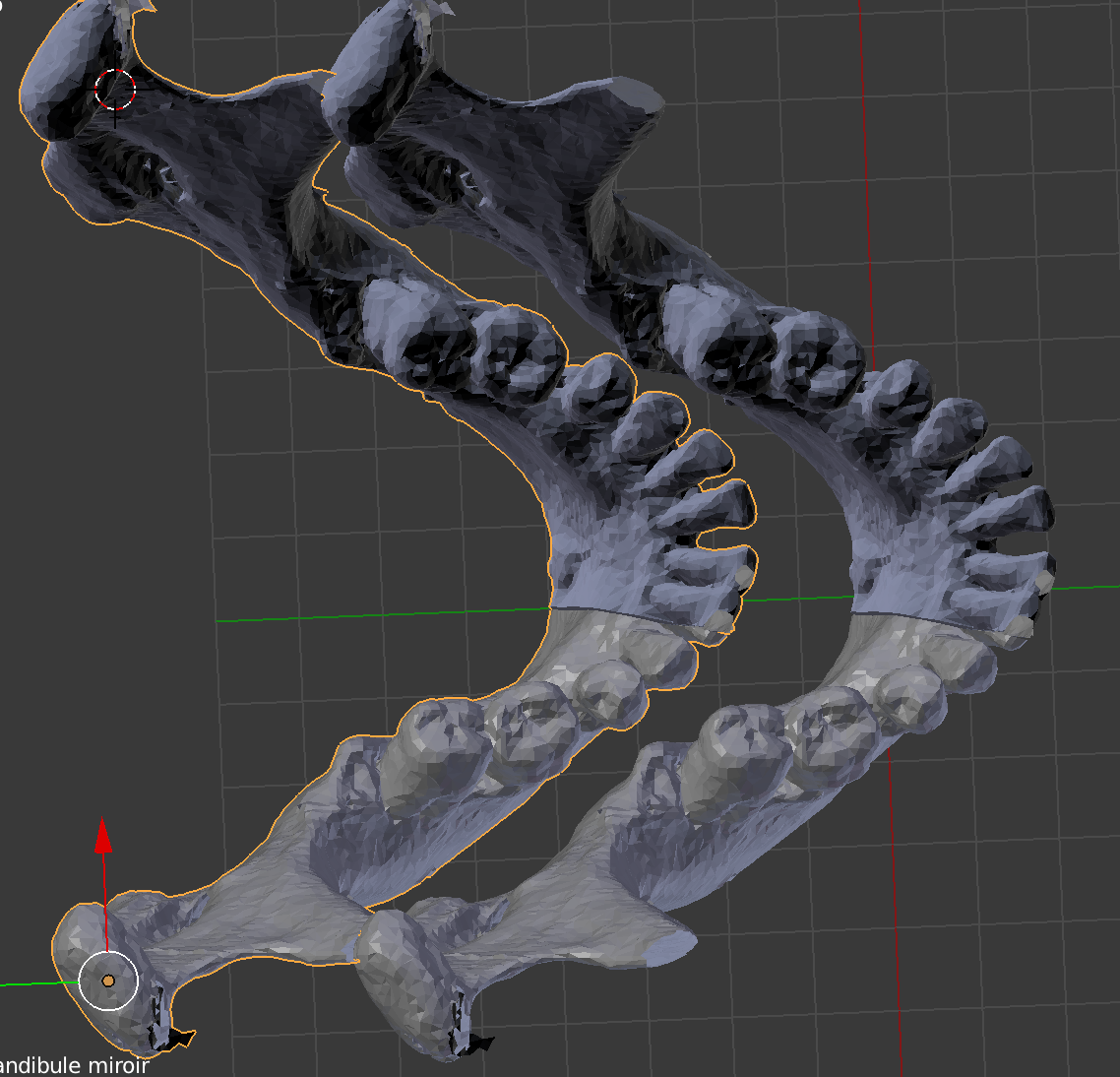 The second question is during the occlusion of teeth. When I want to close the jaw (if the CT scan is not in occlusion), I would like to solidify the teeth of the upper jaw. Like that, when I'm trying to close the lower jaw, I would find the contact with the teeth, and not passing through the upper jaw... 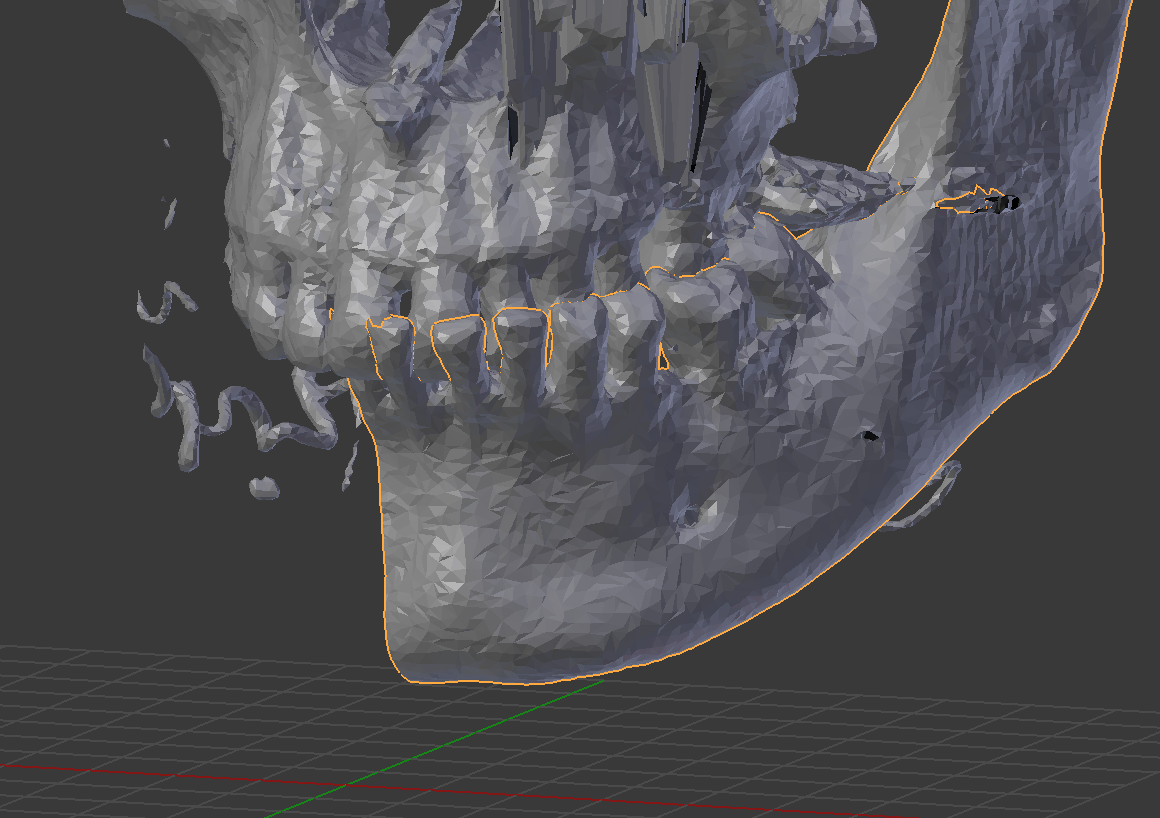 Thank you again for your help! Blender for ever!

Let's suppose you have an object and another one, very similar to the first, and you want to overlay the two.

If they are not perfectlty identical, you should probably start an iterating computation that would progressively guess the function that best fit all the vertex positions...

...if instead they are identical (as in your case), but with different transformations applied such as in the picture below: 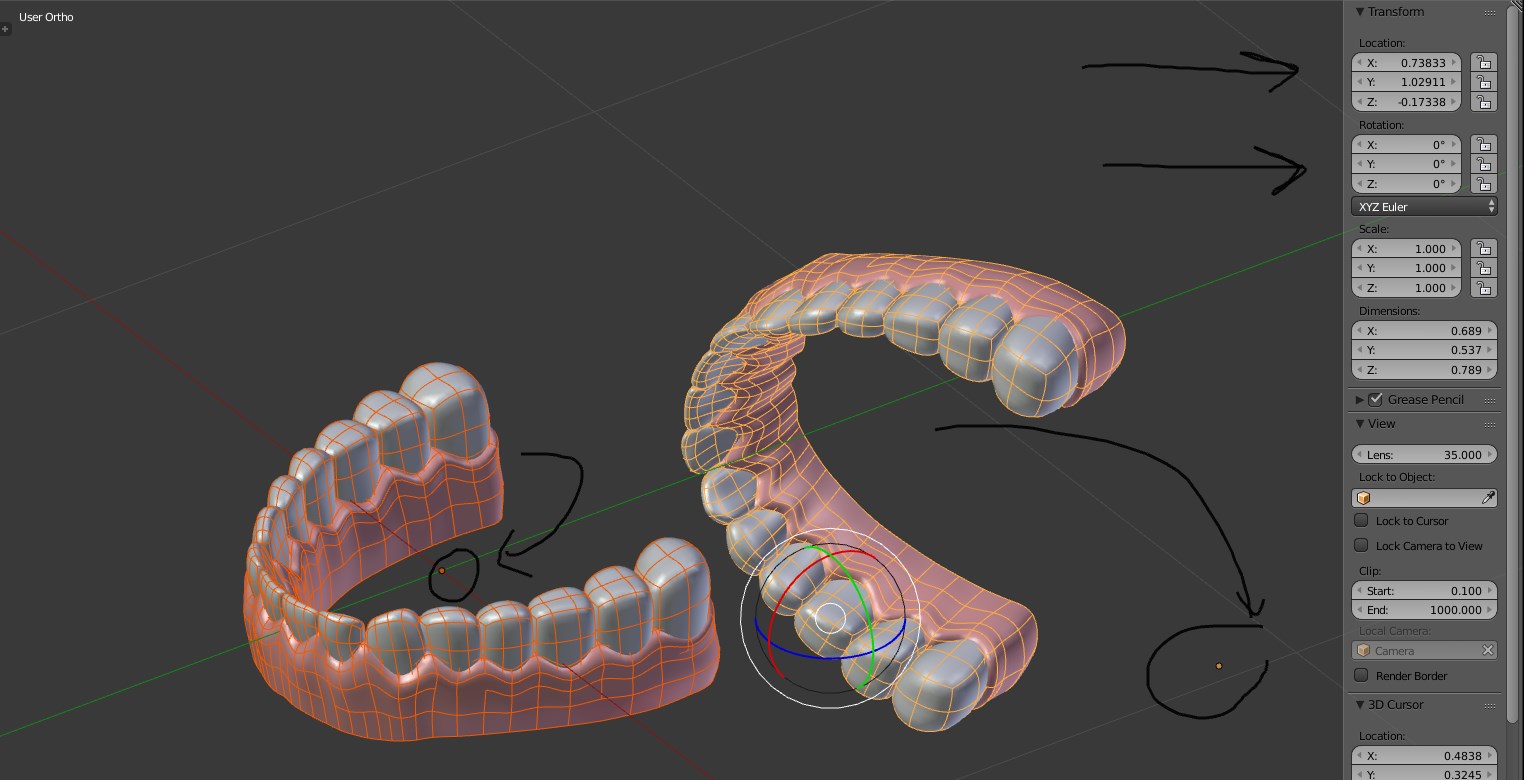 the problem is much more simple. If you'll get able to align one triangular face to the corrispective one, the whole mesh will be aligned. I would suggest to use the Precise Align add-on.

Basically you have to activate edit mode of both object (one at time), select the same triangular faces by selecting the vertices in the same ordere and than create a parented empty with the add-on command: 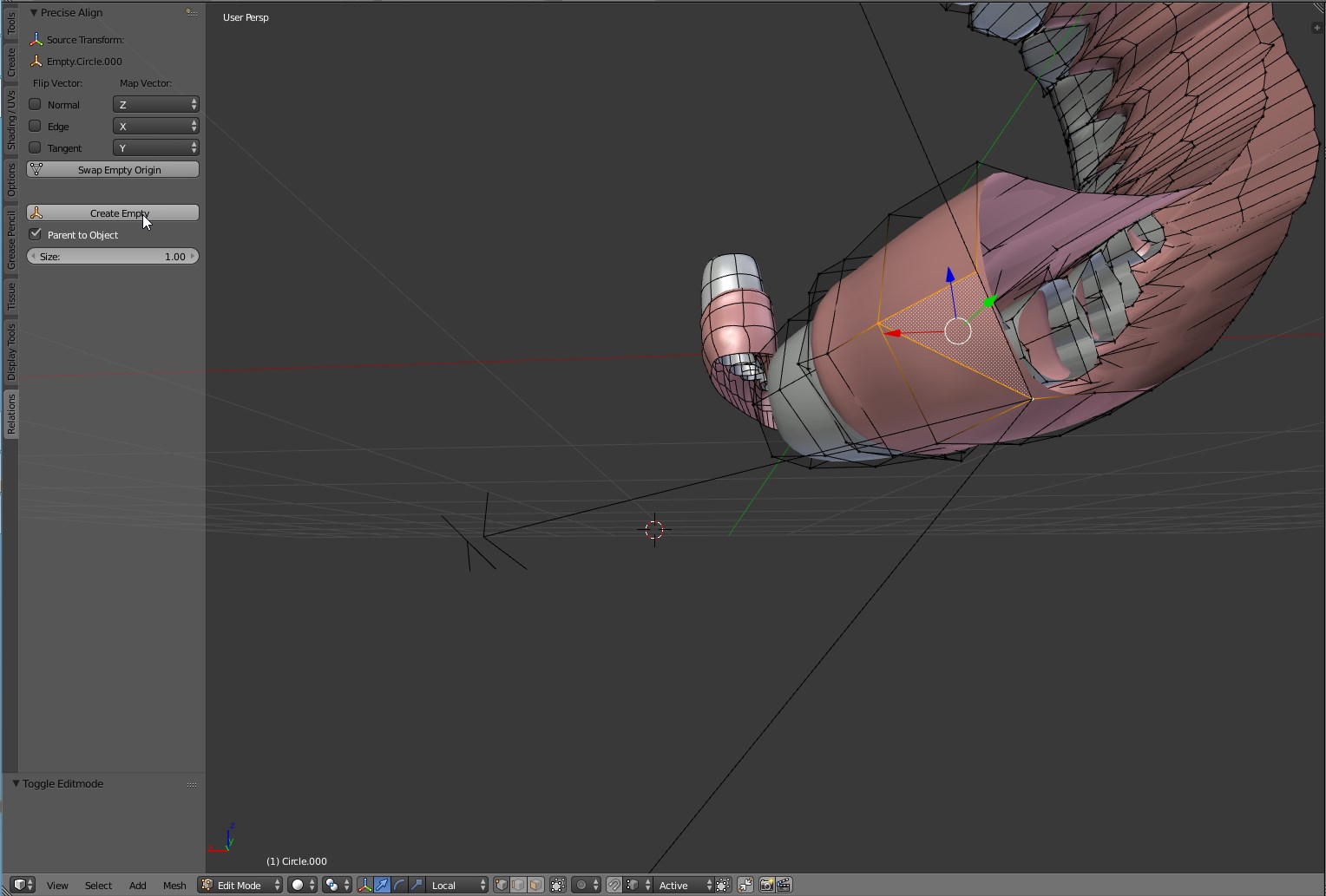 These two empty are now associated with the mesh. All you have to do is to match position and rotation of the empty object and the two jaws will follow their trasformation: 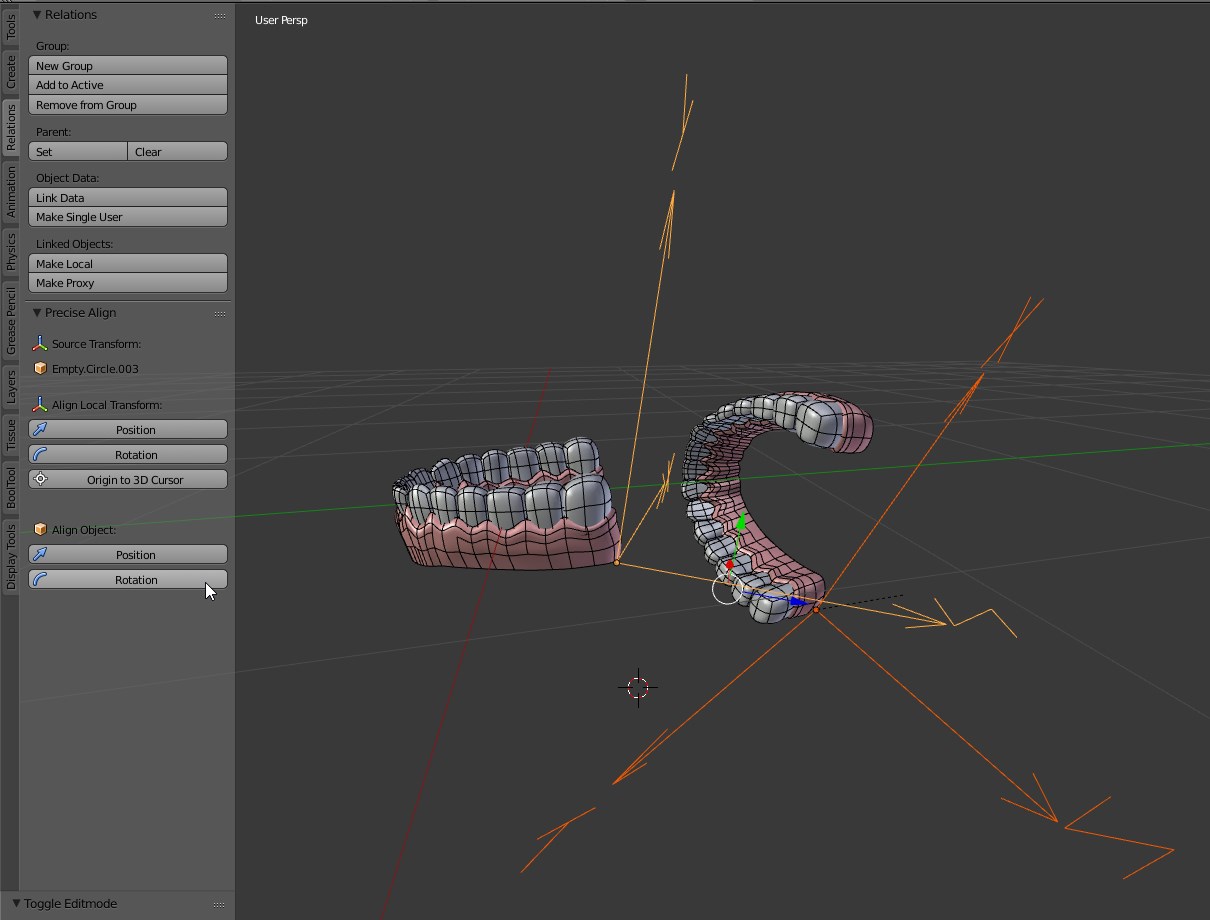 Easiest way to set up a moving jaw is to first of all add an empty that would represent the rotation pivot and than parent the upper jaw to it.

Add a Limit Rotation constrain to the empty and assign min e max angles to limit the rotation of the jaw to a given range too.

As to your second part, have you looked at RigidBody and RigidBody Contstraints?

For the first part though, I'm very new to blender but I think it would probably be easier to export your models to something like Unity, you could then run clever scripts and colliders etc. to do the detection of areas and move parts accordingly. Although saying that there may well be a way to do it in Blender.

0
Stick two faces to each other with different rotation
2
Stick a plan on a mesh
4
How can we move meshes for dental occlusion?
2
How do I snap two similar geometric shapes to each other with rotation and scaling?
3
How to move a mesh to an exact location
1
What is the Blender equivalent of snapping a vacuum cleaner's attachment onto the main hose?

0
How can i copy the object position to the edit position to meet the rest position?
4
How can we move meshes for dental occlusion?
1
How should I design the jaw for rigify pitchipoy?
3
Different mirrored position when i need to join them
1
Trying to fill an opening in an object and match depth