Making an Invisible Material in the Cycles render engine

This gets me the effect that I want, but I haven't been able to get my big block 100% transparent. It's almost, but not quite, entirely unlike a solid object, but it still casts a shadow and appears to have other visual effects on the animation that I don't fully understand.

Can anyone hand-hold me through creating an absolutely invisible material for my big block, or teach me the 'correct' way to accomplish my goals?

1- Make the big cube unrenderable by switching off the camera icon: 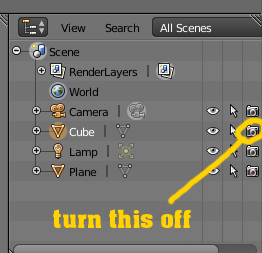 4- Turn off all Ray Visibility for the object in the properties panel. 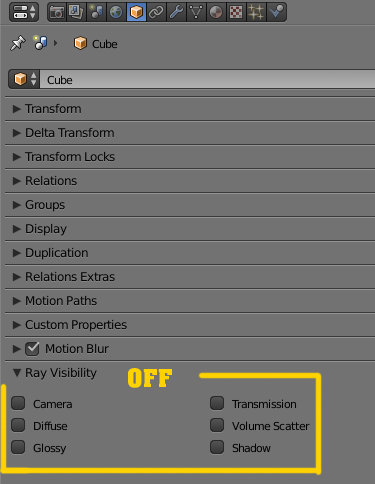 5- Use the object as mask (no need for boolean either)

If you want the object to disappear gradually I would do it with the material. To make it disappear from top to bottom/side to side etc. (like a box covering it up as you described) I would se this node setup for it's material.

You can then animate the value on the greater than node (the one in yellow) from 1 to 0 to make the object disappear from top to bottom. If you want left to right use the X value from the separate XYZ node.

This works because taking the X, Y, or Z component of the generated texture coordinates gives a gradient from 0 to 1 from left to right, front to back, or back to front respectively. The output of this, sent through a greater than node to chop it off at a certain point, is used to drive a mix shader mixing the normal material (in this case the diffuse shader) with a transparent shader. When you animate the value of the greater than node you are animating the cutoff point.

I can only think of a work-around, in the materials tab (on the right) set the node to mix shader.

Add a transparent shader to each one. I'm presuming this works by making it at 50% of it's transparency, then adding a second one makes the transparency 0%

30
How do texture coordinates work?
9
How can I make an object invisible when I render in Cycles?
14
How to make one object gradually disappear as it passes through another object
8
How to use an object as a mask?
3
How to animate text being revealed on the screen
-2
How can I hide emitting planes from view but keep the lighting effect?
0
How to make text fade in and out