Is there a way to do proportional editing only on specific vertices?

I have split several chains of vertices into groups in an attempt to access only one chain at a time for modeling, and it seemed to work yesterday. Today I can't isolate them when I use proportional editing. Is there something I need to do differently?

Here is the situation: I am building a model of the mountain below (it's on the Moon, so there aren't any files out there with its topographic information, and only one high-resolution photo exists). I have to figure out the relative height of its ridges by judging what the lighting means. So I drag parts of the vertex chains marking the ridges up and down using proportional editing, in right ortho view. The other vertex chains I don't want to move remain visible, otherwise I can't judge their relative position, but I don't want to move them. 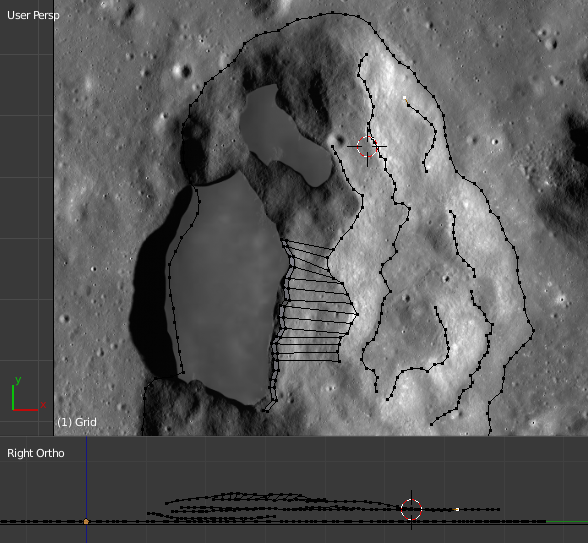 Edit - I see now why it sometimes works - the circle marking the edge of the proportional effect is actually a sphere. If it doesn't touch adjacent vertex chains, then it works the way I want.

You can change the proportional editing type to 'Connected' to only affect the vertices connected to the ones you are moving: 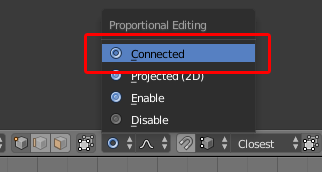 This can also be enabled with Alt+O.

In edit mode (Tab ) selected all the vertices you want unaffected by proportional editing, or select what you want to use and invert your selection.

Then hide those with H and any proportional scaling won't affect them.

Use Alt + H to unhide everything else.

You can select vertices in vertex group, invert selection and hide all other vertices, that you do not want to modify.

Not the answer you're looking for? Browse other questions tagged modeling vertices proportional-editing or ask your own question.

2
How can I make a separated piece of my mesh not move while i'm proportionally editing another piece?
11
Landscape topography from grayscale image
4
How to generate a deformed mesh based on applied texture
2
Is it possible to add distance constraints to the vertices of a mesh?
3
Locking vertices