I have "double-sided" unchecked/disabled, but the backs of my faces still render anyway. I should be able to create a cube, flip normals, and render an inside out cube but it doesn't. How can I make it so faces do not show up in neither the viewport nor the render? 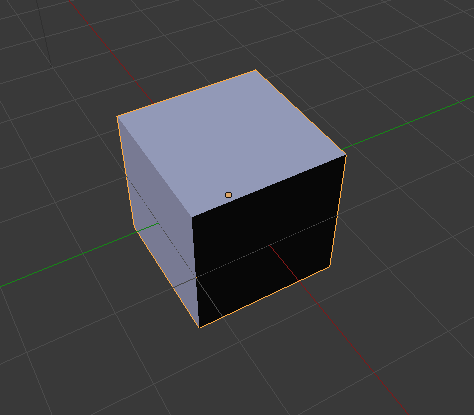 I've found that in 2.4 I could do this with an option called "No v.normal flip" which supposedly prevented the render from automatically flipping normals to face the camera. It would seem now blender still does that but there's nothing I can do about it.

How to make backfaces transparent

Enable the "Backface Culling" option. This is found in the Properties Panel under Shading > Backface Culling. The backfaces will then show as transparent in the viewport. 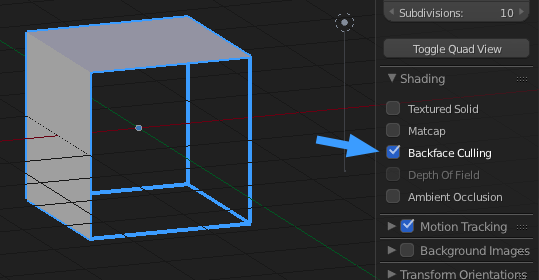 Connect the Geometry node's "Backfacing" output to the "Fac" input of a Mix Shader. Then plug a Transparency Shader to the bottom input of the Mix Shader and your visible shader(s) into the top one. In this way you can factor between your visible material and transparency, or any other type of material for that matter. 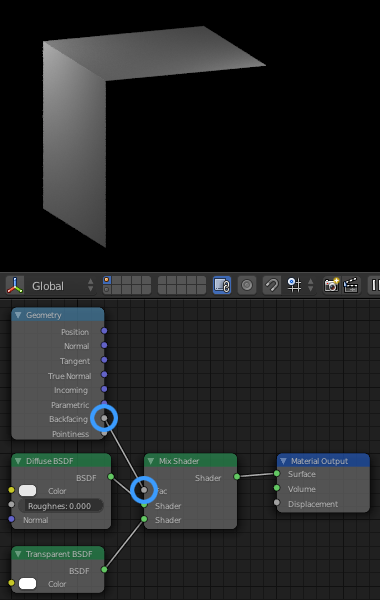 Not the answer you're looking for? Browse other questions tagged rendering normals or ask your own question.

0
Show only interior of the cube?

3
Normal direction screwing up rendering in blender/UE4 but not keyshot?
1
Cycles Texture looks odd on the normal side
0
Replicating double-sided normals on a cube face, extruding causes inner faces
2
Normals trouble with exporting to Unity
2
What's causing this misshading, and how can I fix it?
0
Weird Boolean Modifier glitch (double faced after intersecting with more than 1 mesh?)
1
'Clear Sharp' doesn't seem to be working