Unable to identify frame for cut in VSE - Bug?

in addition to my other question, I have another problem with the Video Sequence Editor in Blender.

So in summary, I am unable to find the right frame for separating the screen capture as it makes a difference whether I am approaching it from the left or right.

Do you consider this a bug? And if not: Could anyone tell me how to get rid of this "feature"?

I tried to follow 3pointedit's instructions and it seems to reveal a problem with the screen capture clip. I started a complete new Blender-project and added the screen capture as a movie. Then, I did "Rebuild Proxy and Timecode Indices" with the settings attached. Unfortunately, Blender crashes immediately without any error message, it just exits.

I tried the same with one of the GoPro clips and it works perfectly (same settings).

So obviously, there is something wrong with the screen capture clip... 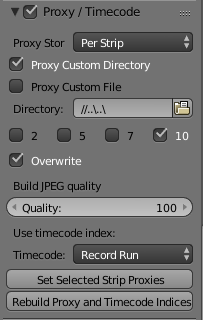 You can also generate a timecode file for the clip (it lives in the proxy panel of strip properties), when creating the TC you can choose to NOT render a proxy. The playback of media should be much better. But transcoding to a more simple codec is best (less compression, more real frames).

My guess is that you are dealing with an MPEG, AVCHD or similar compressed video file that is not using an Intra-Frame compression scheme, but is using Inter-frame. Inter-Frame is not great for editing because it does not contain the information for each frame but has certain keyframes and delta frames that only record he changes from the prevous keyframe. (read this: http://www.pcmag.com/encyclopedia/term/45144/interframe-coding).

Sometimes (I know this from motion tracking footage) the direction in which the stream is read will make a difference and will yield errors.

To correct this you'd need to transcode your source to an image sequence, or a codec that is using intra-frame (unique frames)

7
Video Editing Workflow: Use a separate scene for VSE?
26
How do I use Proxies in the VSE correctly?
4
Blender VSE Renders audio/video out of sync
4
Cameras' Timecodes Within VSE?
3
Center a movie clip in the Blender VSE
0
Video editing workflow - VSE and compositor slows down framerate when previewing?