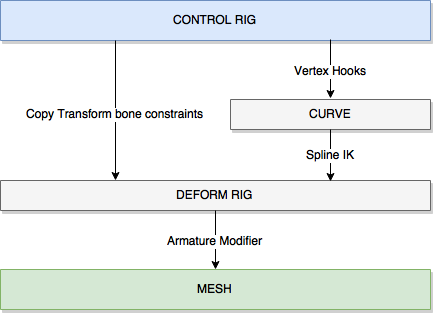 9
Animation advice please (sliding pipes with handles)
4
How do I set up a complicated rig correctly for linking? (Advanced)
6
B-Bones: How to get access to individual segments?
2
Worm/Tentacle/Tail/Spine Animation with ease
4
Dependency cycle detected
1
Blender 2.79 Rigging - Dependency cycle help
0
The bones connected to the Spline IK do not follow the whole armature - Still need help
1
Hooks/controls on a bendy bone?
0
Bones with spline IK follow offset?

1
Armature Fingertips Not Following Bone
3
Rigify finger controls rotation not moving correctly
0
Question on Rigging and Bone roll
0
I need to add finger rig to a model that is already rigged
1
Blender 2.79 Rigging - Dependency cycle help
0
How to IK Rig a human arm with external controllers?
0
How do I set a custom shape for multiple bones?
2
How to rig two separate characters without linking them
2
Rigging/Animation Question (Eyebrows and Eyelashes)