In order to make ivy created by IvyGen addon more attractive and convincing I'd like its leaves to have different colors, not repeating several times across a leaf (with that sharp and easy-to-see transition just in the leaf's center). The main problem here is that the leaves are all joined in one mesh, so the ColorRamp stops (used in material) assign to them as to one object. 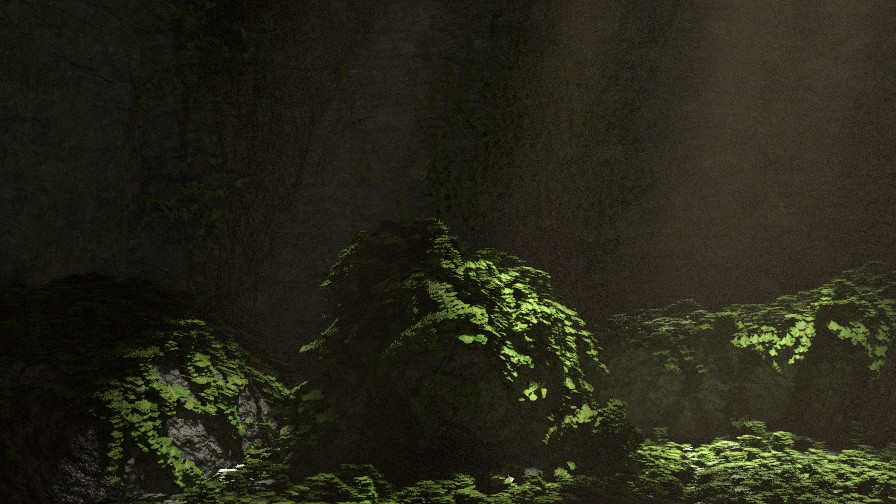 How to make the leaves colored differently and not repeating ?

I will post several possible ways to achieve this kind of task.

Basically, the most intuitive way is to use separating every single leaf into new object by using P > By Loose Parts and it's already described here (also some tutorials about modeling and rendering ivy use this technique as well).

The main downside for this is that it needs large amount of computations and may freeze PC for some time. More than that, after the procedure is finished, the 3D Viewport still will response much slower because there will be way more objects in the scene to take into account (in case of one not very large ivy ~5000 objects, i.e. leaves).

Some great solutions are provided in this thread. There are several of them (at least 3 different ones):

The main reason why I decided to go further is that I wanted to get possibility to setup this color randomness really fast so to test some ivys while modeling environment scene (and also I didn't find that thread from the beginning).

This way assumes using 2 UV maps, one for different leaves' color, while another - for actually the texture (image based). Basically it is one of those listed in the BA thread (except for the script), only combined with another solutions.

After the ivy is created, it has UV map by default, and it's for actually image texture as is told above.
Therefore create one more UV map (I called it "Leaves-1"), it willl serve for different leaves' color task. With this map selected and set to active, enter Edit mode, U > Lightmap Pack (you may also use Smart UV Project option as well, it will fit ivy leaves' needs). After this is done, with leaves still selected, in Object Data tab, UV maps scroll hit that small camera button next to the default map so it to be one used for rendering.

Now, setting nodes part.
Basically, the nodes will be the same as they are in case of leaves / plants creating - with alpha mask using, along bump and normal maps etc. except for one thing. Instead of using Object Info node (with Random output used) what should be done if using first way, UV Map node will be used with newly created UV map name assigned: 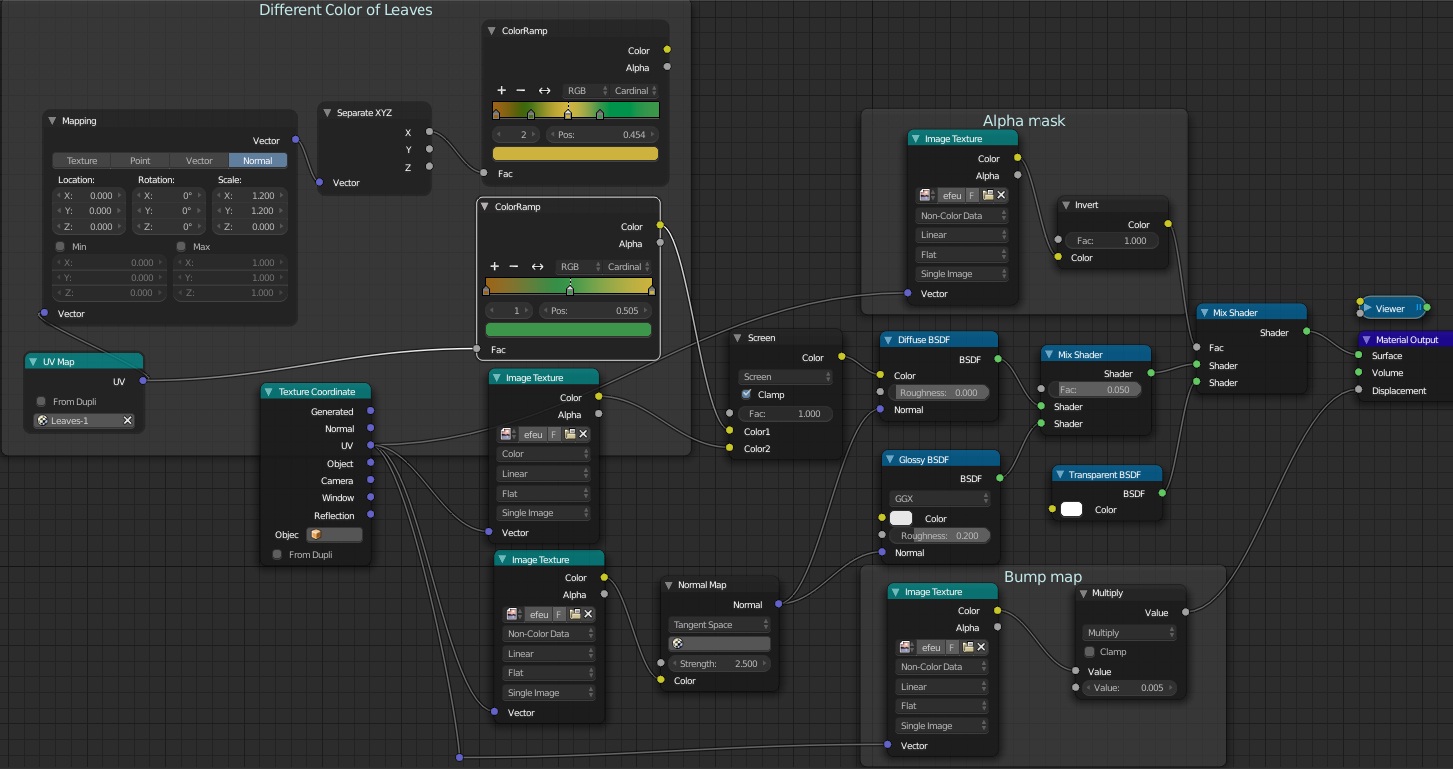 It is possible to change ColorRamp interpolation mode to Constant, the difference of the leaves' color will be somewhat sharper. Also some colors will become more visible (brownish in my case)

And with mixing one of solutions from the Second way with this one the result may look like this: 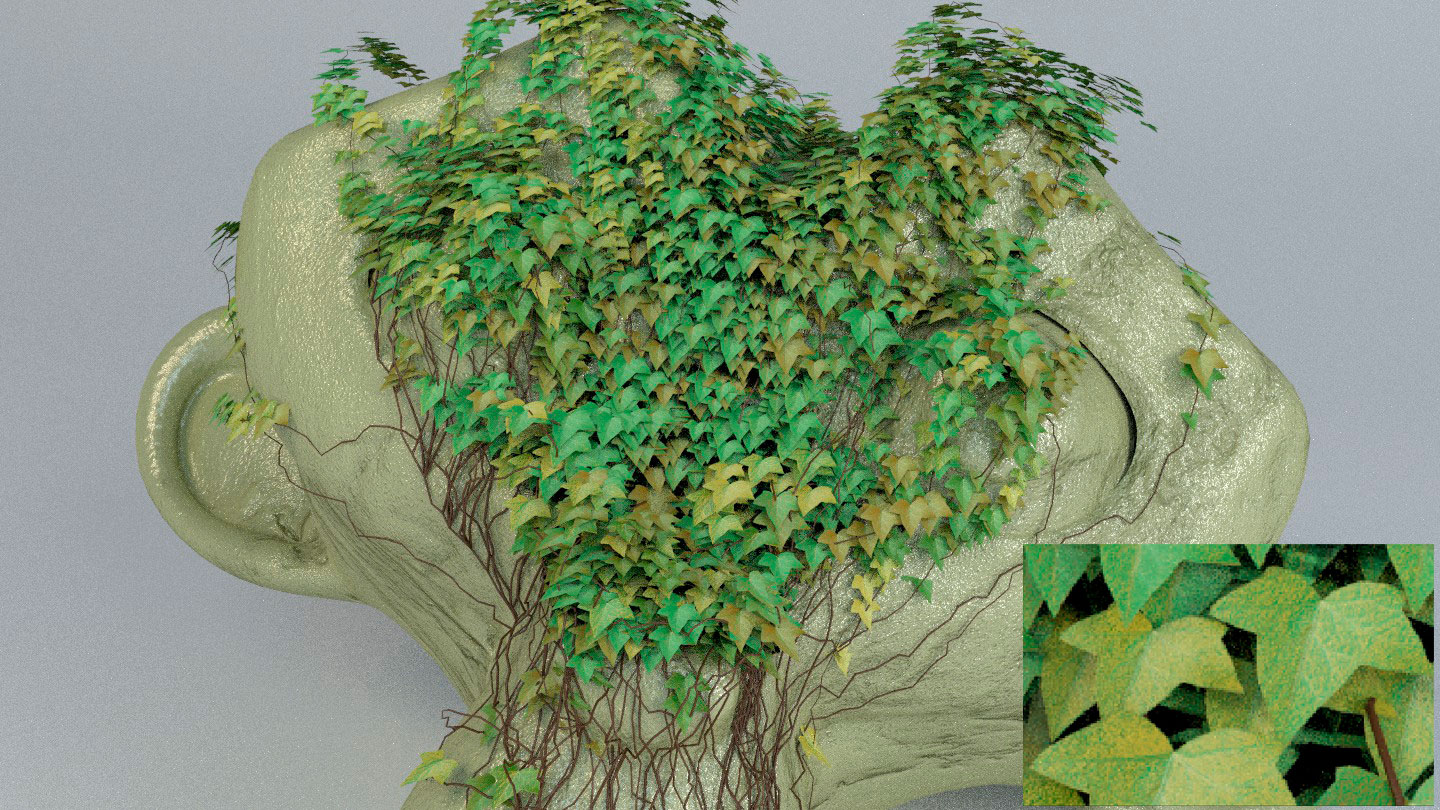 This can be achieved by connecting Random group (instead of UV Map node) to the ColorRamp from the 3rd solution. Random Group is proposed in that BA thread:

Another way, maybe slightly more technical is to use Sverchok to procedurally colorize each polygon shells of Ivy object (single mesh leaves) and that will be the Color Vertex pass you can use in Cycles to quickly add some randomness to the color. 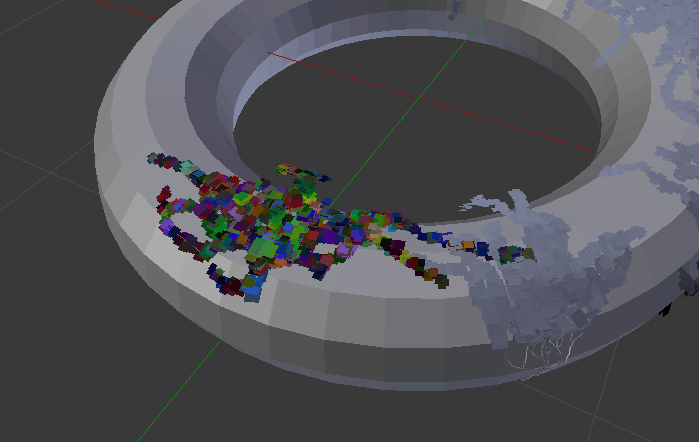 But however, if you randomize using procedural texture noise, you might get something that is more or less good enough.

Not the answer you're looking for? Browse other questions tagged cycles texturing materials or ask your own question.

12
Is there a smart way to apply a better transition between colours while maintaining one solid colour per face?
0
Material colors of faces set to specific random ones by node editor

2
How can I avoid colored light reflections?
0
add texture to colored object
7
Is it possible to make randomly colored objects via the compositor in Blender Internal?
0
colored Metal material
2
How to set Opacity Maps with colored tga textures?
0
Textures of leaves
1
How do I make it so each shape is colored a different color/shade?