How can I tear two bones and their skinned mesh apart during animation?

I'm trying to create a stylized version of the black knight sketch from the movie Monty Python and the Holy Grail. Two characters are engaged in a sword fight, with one of them ultimately loosing a few limbs.

I set up a prototype character, rigged and skinned it and got to the point where I need to tear two bones of the armature (including the mesh) apart, which is causing me a bit of a problem.

I already tried to set up the parent-child relationship between the two bones that need to be seperated by using a modifier and decreasing its influence to 0 during animation. But this still leaves me with the weird deformation of those vertices skinned to the seperated bone.

Another idea might be to use different versions of the character model and swap them during animation. But first I'd like to ask if there is a less time-consuming option?

If you wanna tear a bone chain in a specific joint, you can't just break the parenting of those bones, as this will break the skinning as you noticed.

You need 2 chains to overlap in the location of the tearing (exaggerated with a gap): 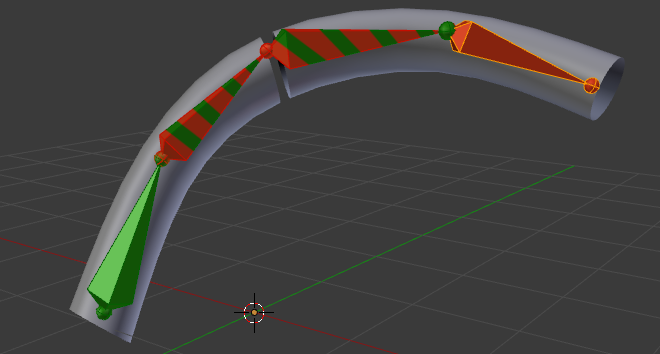 The amount of overlapping depends on how your bone weights overlap on the mesh.

You skin the bottom piece to the green armature and the top piece to the red one. To tear the limbs/parts apart you just separate the armatures.

The only problem is mesh smoothing in the area of tearing. You can fix that with normal mapping or with custom split normals that blender now supports.

Not the answer you're looking for? Browse other questions tagged modeling animation rigging armature bones or ask your own question.