How to get vertex coordinates after modifier in python?

simple scenario:
I have a cube with a wave modifier and I would like to get the vertex positions with python.
I'm trying with bpy.types.MeshVertex.co, but it gives me exactly the same as bpy.types.MeshVertex.undeformed_co.
I even tried with the new dependency-graph....all the same.
Any ideas?

As far as I know you can not do it that way. You can make a temporary mesh and find the transformed coordinates, seen as a wave modifier doesn't scramble the Vertex indices. Using obj.to_mesh is a reasonable way to do it and it's fast.

A commented example of Obj.to_mesh

If you aren't looking for faces, or edges you could drop the edges return value. The indices of obj.to_mesh will match the indices of the original object (if it's just a wave modifier..). 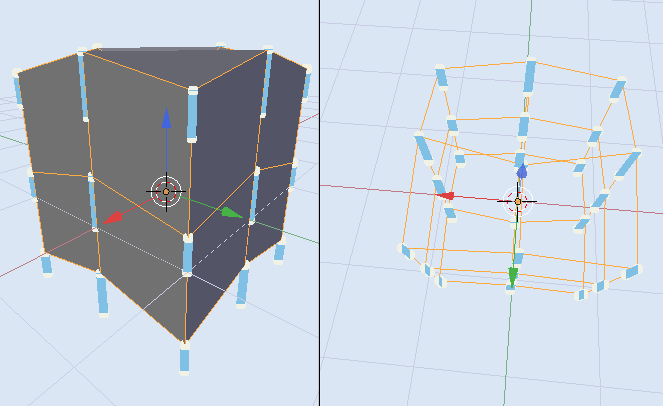 Here the image draws a blue line between initial position and output of the obj.to_mesh function

responding to some of your questions

Not the answer you're looking for? Browse other questions tagged python modifiers vertices or ask your own question.

2
Extracting vertices data after transformations
5
How to get vertex coordinates after modifier in Python in Blender 2.80?
3
Calculate points on a Nurbs curve without converting to mesh

2
Getting vertex weights with the vertex proximity modifier
9
No redraw after assigning new vertex position with python
3
How to use bpy ops that take a modifier Enum as an argument?
6
Python: proportional editing vertex move
3
How to get vertex normals from a shape-key in Python?
0
Exporting vertex UV coordinates
1
How do I get the deformed coordinate of a vertex with Python?
1
How do I get vertex coordinates in the same units as the scene units?
2
How do I get a simple deform modifier to twist from the bottom of the object instead of the middle?