( screencast of the issue in action )

Trying to get a better understanding of face creation. I've got some very high detailed faces I'm trying to make that will later be used with a subdivision (multires) for animating a displacement map.

I'm nearly zoomed in 100% ... a few steps out ... and trying to create some Ngons. Most of the time it works perfectly but occasionally I will get a face that seems to ignore one of the vertices. When this happens the edges are created using the errant vertex but the face seems to skip it.

The faces are all co-planar (0 distance on the Y axis). I even selected everything and re-scaled to 0 on Y to be sure but it didn't change anything.

I've made a video showing what I'm doing. Basically trying to make sure I don't have any faces that are below a certain size near my seam. To do so I'm selecting nearby vertices and moving them to the seam edge vertices with auto-merge on. Then I'm deleting sub-optimal faces and re-creating them with the newly positioned vertices.

Take a look at the short screencast linked above to see the face being created with the strange edge. Perhaps this is just a wireframe preview bug? But I haven't seen it happen elsewhere in the model.

The precision I'm going for is sort of silly but it's one of those labor-of-love projects. I've found ways to make the ngon the way I want it to work, the video shows one workaround, but I've had most of my workaround methods fail and it becomes awfully intensive (I'm optimizing a couple thousand faces this way).

NOTE: I'm using Gooseberry with wireframe colors on a different mesh that is adjacent to the one being used. Not mentioning this because I think it is the issue (this occurs when switching to the standard distribution). Just letting folks who might be confused by seeing nearby edges in an unusual color.

It's a kind of warning that you are creating a concave quad face.

Ther's an article that explains they should be avoided.

Remember that render engine base their calculations on triangled meshes. Concave quad faces, as non planar quad faces, are not automatically splitted in Blender. 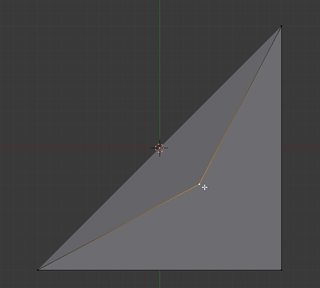 0
Model error apparent when uv uwrapping. How can I locate and delete errant faces?
0
python : creating 4D simplex by connecting all vertices with ever possible triangular face
0
How to merge faces without creating new shapes
1
Texture Painting issue - colour randomly showing on wrong faces
2
Why are faces on same plane different shades of grey in solid viewport view (not normal issue)?
0
Issue with faces after adding more geometry