I'm going to eventually make a game and an animation. The first few scenes are going to be set in a mountainous area with a small canyon, a river running downhill to a lake, and one big mountain, which a small tunnel will be carved into. On this map, the dark blue is the tall mountain, the dark grey is the second level of elevation, the brown is the small tunnels, the light grey is the first level of elevation, and the blue is the water. 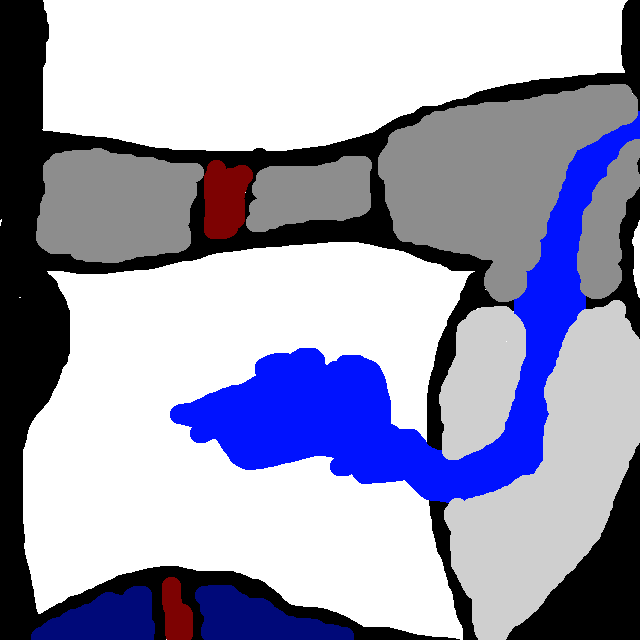 I'm curious as how to actually do this, and I know there are a lot of tutorials on the subject. Thus, I came here to see what tips and ideas you guys have, as a community. I personally think that if I come to the nonprofessionals and freelancers, I can learn more about the assorted functions.

In essence, I want to know if I should start with one big object and use that, or if I should make tons of small objects and link them together. This is not a question of finding images, this is a question of creating a landscape.

The answer to your query,

should [I] start with one big object and use that, or if I should make tons of small objects and link them together

Is an unambiguous "it depends". Some of this is a matter of directorial decision making on the part of the director of the animation, and on the part of the director of the game. If I were doing this, I would start by categorizing the content elements into several categories base on size. In this case, the largest size would be "Geological", the next largest "Architectural", the next largest "human", the next largest large pet (think 100 kg / 220 pound dog here), the next largest small animal (think cat / fox / rabbit), then maybe tiny mammal (field mouse). For each category I would define a ~.blend file to use as a template, with lighting, and camera setups appropriate for the size items being modeled. Of course, there is no reason you are required to do a field mouse in the tiny mammal blend setting, but it will be easier than trying to do it if the camera and lights are at a point where they would be useful for modeling a mountain.

These categories are not necessarily hard and fast; given a particular category of item, say vehicles, some might be "human scale" (e.g., passenger automobiles), while others (18 wheeler semi-trailers, or railroad cars) will be "Architectural scale", while a few (Maersk M3 containerships) are geological scale. In the case of the geometry you are asking about, the mountain would be geological scale, but the small tunnels might be architectural scale or human scale.

Then again, consideration will need to be given to the size of the area. Blender has a maximum scalar value in any direction of 10,000 units, so the maximum displacement from one extreme to the other is about 20,000 units. if the units are considered to be meters, means that the largest terrain item in Blender would be about 20 kilometers square, or 400 square kilometers. This would convert to about 144 square miles (arithmetic calculations here are approximate, but close enough to make the point.) If you're planning that your game will require more area than this, you will have to use more than one scene.

What I would do, therefore is to do each modeling task at the appropriate scale, using the largest scale object as the "stage" for smaller ones. So the terrain would be one large object in an Geological scale scene (base scene), while the tunnels might be smaller objects, and might be linked into the Base scene, as would all of the components of the scene. Model them in the appropriate scale blender file, and link them into the base scene.

Why link? Because if you link pieces in, one of which we'll assume for the sake of discussion is a small bridge, and decide to change the item (the design of the bridge is all wrong for the scene, we'll use a different design instead), you shouldn't have to worry about changing the bridge in the base scene. And if you want to refine the model of a field mouse sized item, say a magic amulet, you can work on that at a scale that makes working on the amulet simpler.

There is one thing worth special mention, especially with respect to "large mountains". Special attention needs to be paid to geometry when as the slope of the terrain approaches, and exceeds 45 degrees from the horizontal, as using a plain grid based upon a horizontal projection in this instance will result in undesirable geometry. When doing a bit of terrain where the slope is 35-40 degrees or more, add additional geometry parallel to the horizontal to add additional percent. This image 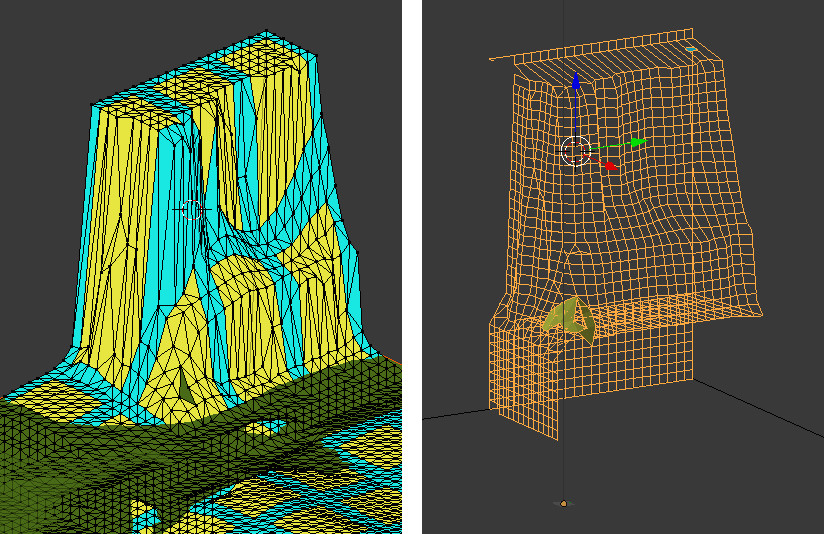 shows what I am referring to. The geometry on the image on the left is based upon a 10 meter x 10 meter grid, which is adequate on the approximately level surfaces. As you can see on the cliff, however, the 10 x 10 grid, while satisfactory on the horizontal surfaces, is not so pleasing on the more nearly vertical surfaces of the cliffs in the background. The wireframe view on the right shows a much more pleasing geometry created by subdividing the vertical surfaces at 10 meter intervals.

11
Landscape topography from grayscale image
8
Material to generate a mountain
7
How do I create slices of a topographical mesh?
2
Cleanly Combine Two Landscapes
4
Creating a large landscape with accurately varied elevations
0
Is the add landscape button really just a pre-made Mt. McKinely?

10
Low Poly Mountain Terrain
4
How can I effectively import and texture a large height mapped terrain mesh?
2
How to select a mesh peaks and troughs
1
Make multiple Bezier curves manifold and free of intersections, for 3D printing