What's the easiest way to rotate around an edge that is not parallel to a primary axis?

Given the highlighted edge in the left excerpt of the screenshot collage above, is there a quicker way to be able to rotate the cube around that edge than rotating the whole cube so that the active edge is parallel to one of the primary axes, making the rotation, and then rotating the cube back to its original position?

How about if the cube is chosen, but instead forming the diagonal of one of the faces, one selects the first vertex, and for the other end of the new edge, selects the vertex opposite of the first, along the diagonal of the cube. The new edge referred to is the active edge in the right half of the screenshot excerpt above. Again, is there a faster or more efficient way to rotate around the diagonal, than rotating the cube so the diagonal aligns with one of the primary axes, making the rotation, and then rotating the cube back to its original position?

In both cases, I want to rotate the cube around and perpendicular to the highlighted edge, as in the results screenshots below.

Here is another way ( without effecting the pivot element ):

You can rotate along normal if the edge is part of a face.

Then select the cube while the edge that the cube rotated around selected last, then hit R button to rotate the cube and Y button twice to rotate around the active edge. 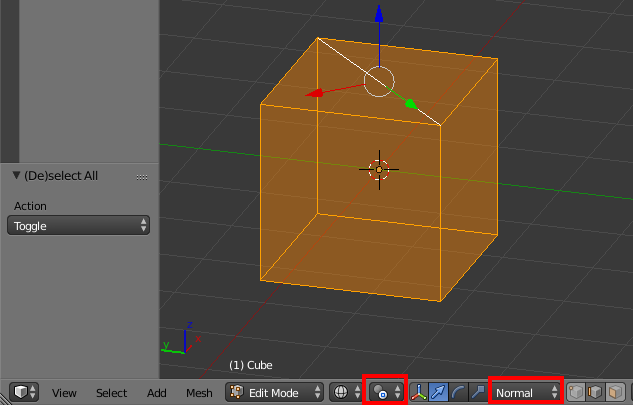 This is super easy with my addon, Mesh Align Plus. Select two verts (doesn't need to be an edge), type an amount, and hit apply. GIF:

More advanced rotations are also possible (you can shift the axis around, rotate around a vert and the 3d cursor, rotate a piece of a mesh, etc.), but that's for another day...

Not the answer you're looking for? Browse other questions tagged modeling mesh transforms or ask your own question.

2
How to rotate an object by a special axis, without changing the shape
12
How to make all quads or ngons on your mesh planar (2d)?
0
Align object with group of vertices

6
How can I rotate an object's coordinate system without rotating the object?
1
Why do bones further down the chain get stretched when a bone is rotated?
0
Reset rotation direction of mirrored object
0
Spinning single component around axis without affecting the compounding units
0
Rotate group of objects over an edge
1
How to rotate a shape in another 3D software so that the rotation matches with the rotation in Blender?
2
How to rotate half of a plane around the split edge after cutting it in half using loop cut
1
Animation - Using a Different Axis to Rotate the Entire Object Than the Normal Object Axis
1
Multiple rotations do not add up
0
uv project from view issue