For a game project I'm working on, I want to "stitch" together several grid-like meshes: 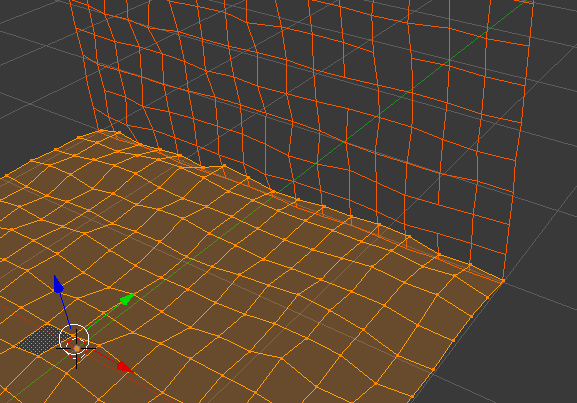 Each mesh is sculpted starting from a regular grid to give more depth and detail to its texture. But the individual meshes have to seamlessly connect to their neighboring mesh.

Currently I'm achieving this by selecting each vertex pair and merging the vertices. Which is a lot of dull work. "Remove Doubles" with a big tolerance setting won't work because sometimes the vertices are closer to another vertex than they are to the one they should be joined with.

Can anyone think of an efficient way to join such meshes at their borders?

I'd write a python script that just sorts all selected vertices along an axis and then merges each odd+even pair, but I'm not fluent with Python or the Blender API yet :)

In the time since I asked my question, another question + answer pair has appeared that does what I originally intended to do (merge the edge loop instead of bridging it):

How to Merge Two Edge Loops

Newer Blender releases have Bridge Edge Loops tool for exactly that purpose. Select two edge loops with exactly the same vertex count, then execute the operator. The tool is accessible through the Space menu, or Specials W menu.

There is also an addon included with Blender named LoopTools, containing Bridge tool with the same usage as Blender's built-in tool I described above.

Not the answer you're looking for? Browse other questions tagged modeling scripting mesh vertices or ask your own question.

33
How to merge two edge loops

33
How to merge two edge loops
0
Joining the meshes of two previously separated objects
6
Does something like a Join Modifier exist?
2
Vertices—loop indices vs. unique indices
3
How do I merge multiple rows of vertices together?
1
Merging vertices in Blender - 3DS Max style
2
Add vertices at the intersection of edges