Why is some code being skipped in the BGE?

This is my code:

This is my result: 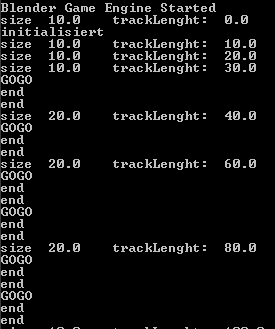 As you can see, not all the lines are executed, but there aren't errors either.
As Chebhou said the problem is the line where i try to load the FontObject:
scoreAnim = scene.objectsInactive["scoreAnim"]
I copied this at the beginning of another function and than this function isn't executed anymore.
So there is any problem with loading Font objects. Although I have it on an Inactive layer

This function should duplicate a score text object. The duplicated object than should then play an animation and slide to a corner. The score is saved.

Here you can download the .blend
2D car Game

fazit: you shouldn't parent objects on different layer when one of those layer is Inactive.

3
Problem with script being invoked twice in BGE
7
Why does blender crash when my missile disapears in the BGE?
0
Why is my action modifier not being activated?
7
PythonScript to load data as colored point-cloud
2
Blender Python: setter not working
1
Why are some of my command line arguments being ignored?