How Does Cloth Friction Work?

Question: How does Cloth Friction work in a scene such as this (or any other situation)? I tried increasing the Cloth Friction, from 0.0 to 80.0, and I didn't see any significant difference in the speed of the cloth sliding down the slanted floor. I did see a change in the speed when I changed the rotation on the cloth&floor from 45deg to 35deg and 25deg -- the cloth slides faster when the floor has a steeper incline. However, I didn't see a difference in speed/motion when I increased the Friction to its maximum (80.0). I'd love to try to increase the maximum past 80.0 to see if it works, but I don't think it is possible with Blender. Is this expected/normal behavior? I would expect the cloth to slide down slower with a higher friction.

Here's a simulation of the situation (Blender 2.75).

The parameters that I cosidered in this "catalogue" are: 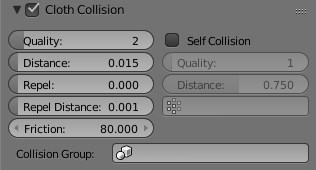 By comparing the elements of the first row, I can say that it seems to be at least a little difference of the behavior when friction jumps from 0.1 to 80 (but is not that strong as one expect)

Look at the last element of the matrix (4-4): it is the one where friction reveal itself in a more convincing way..but there's another, which has the same behavior: 2-4. This led me to think that is also important to consider how many faces your collision object has.

It seems that changing only the Friction factor is not enough to run the sim as expected, but you have to deal at least with other two parameters:

Friction is the value that drives the pover of frictional effect, but it must be supported by other variables in order to affect the sim.

Here's the blend of where the gif comes from: