Mesh does not move along with bones in pose mode (uses rigify armature) Ver 2.75

As the title says, my mesh does not deform along with the rigify bones in pose mode, even though the bones are in pose, and not rest position. I have already adjusted the weighting, and I know that in the past, it's worked completely fine. I have no idea as to what caused it, though I believe it has something to do with changing the weights on some of my objects.

In the past versions of Blender, selecting multiple vertices in edit mode during this stage would have crashed the program, though that seems to be fixed in the latest version, giving me some hope that this is a mistake on my part, or a fixable bug.

Below is a screenshot of what the problem is like. I've also attached the .blend file in the link for anyone willing to lend a hand.

I played around with your .blend a little (good you uploaded it...). I realized that the Armature modifire got removed. I dont know how this happend. 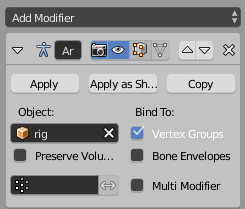 Just add the modifire again and you will be fine. In the picture you can see the needed settings.

I also realized that your armature is scaled extremely big. preess alt + s to reset the scale if this size wasn't intended.

By the way you can delete all the annoying meshes in the last layer. they arn't needed anymore.

It seems that your rig can be saved. In the outliner select the objects within the red box one after another and (re)add an armature modifier to each as shown below. 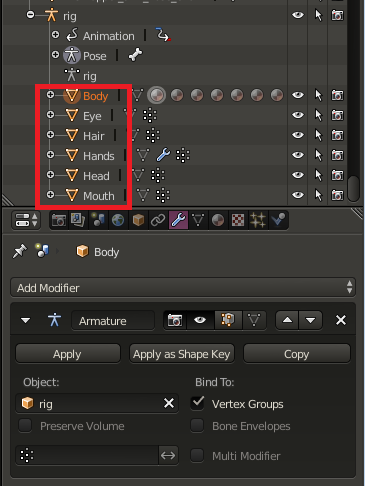 In case you aren't awere of make sure that that you configure IK or FK correctly here is an example for FK. 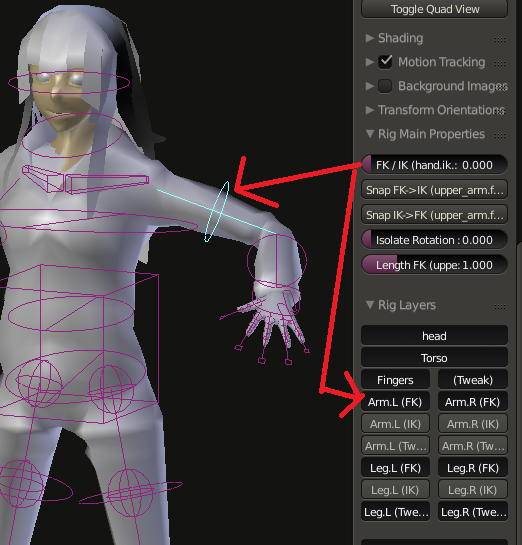 Not the answer you're looking for? Browse other questions tagged modeling animation mesh rigify or ask your own question.

3
Rigify finger controls rotation not moving correctly
0
Mesh does't move with armature
0
Multiple meshes with rigify: One does not transform at all
0
Mesh does not move along with bones
1
Edit Rigify Rig after Generation
2
My Model's Forearm Twists Too Much
2
Mesh Lagging Armature