How does Blender decide in which window it shows the render

This has puzzled me for years: How does Blender decide the window where it will display the rendered image when I hit F12 to render?

By default it picks the largest area, unless an image editor already exists.

You can alter this behavior by setting the Display option in the render settings: 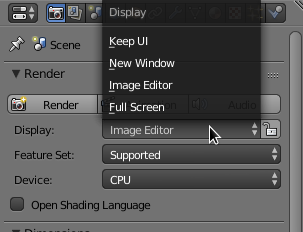 In 2.8 I found this in the top menu Render/Display Mode

Not the answer you're looking for? Browse other questions tagged rendering interface or ask your own question.

2
How to choose which viewport to render in?
0
How do we control which 3d View the render result is displayed in when multiple 3d views are visible?
4
Where is the render display mode setting in 2.8?
3
How to add windows in a workspace which has no handles?
0
How to set up the interface
0
My lowest panel is changing from the editor window to the rendered view