How to make a mesh surface that looks like cubes stacked in the shape of a sphere?

I want to make a mesh object that looks like the outside surface of cubes stacked in the shape of a sphere. I thought I saw this once, but I can't find it.

The final size will be big (up to 100x100x100 cubes) so I think making a million cubes and merging them (modifier Boolean Union) is going to take quite a while, especially if I have to do it differently for every frame.

As a first step, I've stacked cubes in a hollow spherical shell.

Through brute-force application of logic & math & coffee, I guess one could define an algorithm to generate the mesh directly, but I somehow think that I saw this done before in an elegant way. "cubification"? "cubation"?

Here's an example of a small shell that takes about ten seconds to generate. In the picture I've removed the top. 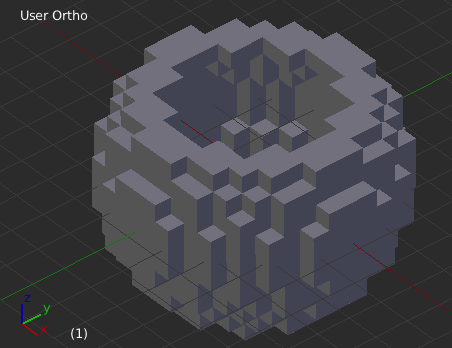 I think you are on the right track here, but the slowest part is the creation of all the primitives. (reason - each new object's name must be checked for name collisions, and this gets progressively slower as more objects are added, it's not something we can prevent, via python)

Instead use from_pydata and generate the cube data as a function of the their center x,y,z and then extend the verts and face indices that way. Lateron you can do a post processing step which removes all the redundant (inner) faces

As related question / answer here: Extruding problem shows how to construct the pydata for cubes in one massive list

Here this is rather fast, but doesn't remove redundant geometry -- but it is miles faster than adding primitives: https://gist.github.com/zeffii/7ef17b4932e61ee12221

One possible way to do this would be to use the 'Remesh' modifier. It has an option to turn the selected object into blocks, though specifying the exact amount of blocks may be a bit difficult.

Here I have a UV Sphere with a remesh modifier set to 'Blocks'. I also added a Subsurf modifier before it so that the surface is smoother for the remesh: 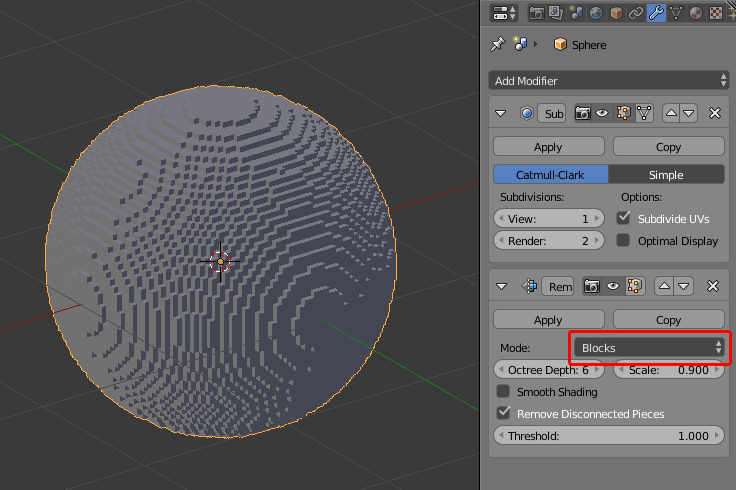 You can use the 'Octree Depth' property to increase the resolution, but it will get increasingly slow when increasing this number.

2
Where can I find the code behind the Remesh Blocks modifier?
2
Extruding problem
5
Why (actually) does it take me so long to make 1000 cubes?
3
Make a sphere of cubes in Blender using python script

1
How can I create a texture that looks like a woven strands of metal?
1
How to make 3 quadrant sphere?
0
How can I make a mesh copy the same shape of another mesh?
0
How to reduce the convex shape of a surface, to make it more planar?
0
Apply scale/location deforms mesh