My addon is in /home/usr/.config/blender/2.68/scripts/addons/foldername, has an __init__.py and cannot somehow import parts, that exist in the same folder. It says, no module named mymodule but from text editor it runs and work properly

What could be wrong here?

You can place your module into the folder blender_directory/2.68/scripts/modules/ (so Blender can found it automatically), while your addon can stay in the scripts/addons/foldername folder with its __init__.py (and not __index__.py, by the way).

Or, you can go to User Preferences, tab File, and specify a custom extra folder for scripts, in the scripts input.
Note that this custom folder must contain 3 sub-directories : addons, modules, and startup. 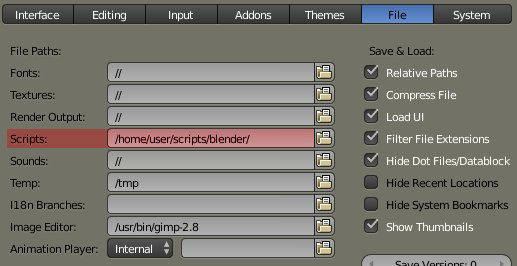 This way, no need to use sys.path.append()!

Mostly this is a Python question, but it can be helpful to see working examples. Just like topology isn't strictly a Blender specific topic yet we still cover it sometimes. This reimport / and local imports topic is not necessarily obvious in a Blender add-on context.

If you have a folder called 'SomeAddon' and it contains the following files.

And you want to import a few functions from resources.py into __init__.py, then you do

This will work once, but when you go to reload python F8 - as you will most likely do a lot during development - the changes you make to the functions (function1, function2, function3) will not be pulled in - globals() will still contain the cached versions of the old functions.

You can control what your add-on does during the reload event (triggered by F8). Most add-ons have some form of explicit reload of their modules. What tends to work is this (or something similar):

The first time you enable the add-on, resources is hoisted into the globals for this module (your add-on). When you hit F8 resources is already present and to update it you need to use importlib's reload function.

You dont need all this. Just import from __init__.py like this:

Or from a subfolder

60
Using 3rd party Python modules
2
How to access to Scipy.special functions within the script window
0
Need easy method to make SciPy available in my scripts