How do I control refractive properties realistically?

I know a bit about controlling dispersion, but I am interested in learning how to use IOR (index of refraction) to mimic specific materials, like a sodium-rich glass. What is the best way to configure this? Am I just missing something?

In physics, dispersion is caused because different wavelengths of light (colors) have different speeds than each other depending on the medium, and therefore have more or less refraction than other wavelengths.

Now in Yafaray, you have the basic IOR field, as seen below. But, the dispersion field is simply one field. To get accurate dispersion, you would have to enter the IOR for every single wavelength of light, because dispersion is not linear. It is a complicated relationship. But, since Yafaray only has a single slider (Dispersion Power) that affects dispersion, I'm not sure if it is the right tool. 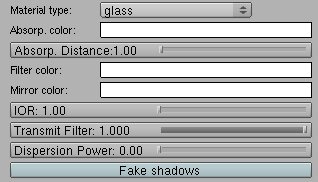 My comment stated: 'Two words use Cycles.', but I didn't know that Cycles doesn't have dispersion/caustic support (YET). You might want to check out LuxRender, but I believe that it hasn't been updated since 2009.

Not the answer you're looking for? Browse other questions tagged rendering light external-applications or ask your own question.

8
Which Exposure control to use?
10
How to control the angle and range of a light
1
How to control eye reflection?
2
How to create an object with both emmision and diffuse or reflective properties?
3
How to adjust light's strength in LuxRender?
5
How to control many tiny lights
3
How to get rid of internal shadows/blackness in glass/transparent/refractive materials?