Why does the top displace modifier always switch to the active texture?

Often when modeling I have a need to apply multiple layers of displacement, with each displace modifier using a different texture. However, every time I go to the texture panel and select one of the textures the topmost displace modifier (and none of the others) switches to using that texture. I then must go back to the modifier panel and switch it back, which is a royal pain in the neck to do this every time I go to edit a different texture.

Why does Blender do this? I don't think it is a bug as I can remember it doing this for as long as I have used Blender.

It's the same with materials:

Instead, I should select the blue object:

I have to select the blue object.

To "select" a texture being used by a displace modifier, either click the button next to the texture slot in the modifier: 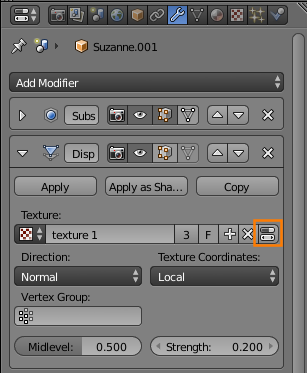 Or in the texture panel, select which modifier you want to edit, instead of which texture: 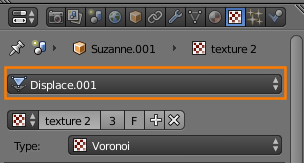 If you want to be able to edit a specific datablock regardless of the object selection, you can Pin a panel by clicking the pin: 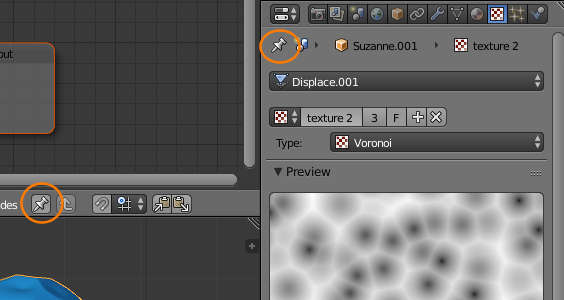 This will prevent that panel from displaying another object's datablocks until it is unlocked again.

10
Smooth displaced mesh
5
Why does image texture used in displace modifier not give the correct height?
0
Displacement Modifier and Texture Coordinates
6
Blender add rough/random surface
2
How to get unique displacement for each particle object?
1
How to properly apply PBR displacement on non rectangular Planes?
2
How to use Displace and Solidify modifiers to produce constant thickness