I used blender as all in one application. I model, animate and compose in it. Now I need to add a simple scrolling credits at the end on an animation.

I want to know if there is a easy way to make scrolling credits only with blender. The only way I can think is create a scene with the a text object and animate it vertically so it appear to be scrolling. But the text can be very long.

I'm also open to any addon for Blender that can archive this.

First of all, avoid using Blender's default font because it's the lazy option.

The quick and dirty solution is to use TextEditor's own Text To 3D Object feature.
TextEditor -> Edit -> Text to 3D Object

That will give you two options:

My issue with this is it rather limits the amount of design aesthetic you can give to the Text.

Naturally there's many many other options that would work, and this happens to show how to use Sverchok to generate credits. Warning, this may be overkill, but may interest to some. Especially scripters should read the code in fast_credits.py to see how Scripted Node works and how relatively easy it is to customize this script to do more advanced stuff.

I'm using a font called Cabin which comes in several weights including Bold and Regular and I've loaded those in using the node's properties on the node view rightside panel (press N to view it, with the Typography node selected/active).

If you want multiple font weights for different text elements you simply add a Typography Node and load a font type into it.

Let's take some formatted bit of text, the words to the left of the Pipe symbol | will be bold, and to the right regular. And for the sake of this example i've set their align to be 'LEFT' and 'RIGHT' for either side of the pipe.

The sverchok Typography node is a beast with almost all the features that the regular TextObject exposes via the Properties panel. The node is merely a notification of all that functionality (or what makes sense to me). You can see more options by pressing the "Show options" button on the node, this is incidentally where you can set the align orientation of all text that that node produces.

some tips for this node tree:

Then add an Orthographic Camera and animate its position, render the output, and use the Sequence Editor to add the Credits to your already rendered animation.

Some things to consider:
Unless you are using specific features from Cycles you can use Blender Internal if it renders faster on your machine. A Cycles render of text is fast if you use an emission shader in your text objects and switch on AO to get fast lighting, maybe even render with transparent background.

As of Blender 2.76 the VSE (sequencer) has a new Text Effect strip, which is worth considering too, but it is currently a basic implementation. It has been developed in the Gooseberry Branch for the named alike Open Movie Project finally released as Cosmos Laundromat. 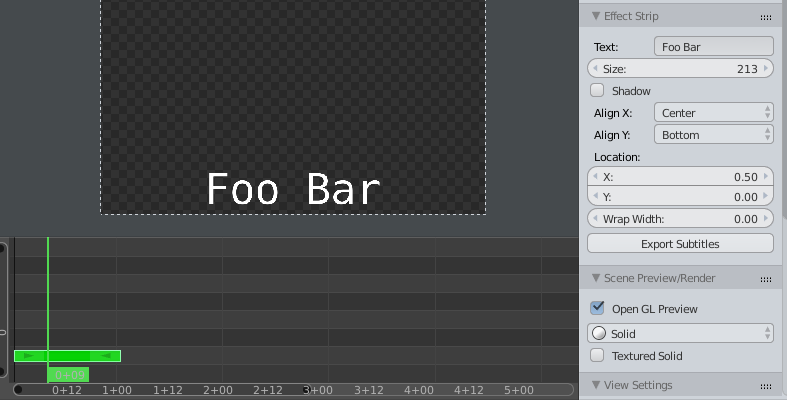 One way this can be done, is to create an image of your credits in Photoshop, GIMP, Inkscape, etc. This can then be animated in Blender to scroll.

I started this off by making a decently large image in GIMP, making sure to keep the vertical resolution bigger than the horizontal. At that point, I added in my text, using guides to keep things aligned better. Before exporting, I made sure to remove the default white background so that the background was transparent.

The first thing that should be done before importing the image, is making sure the renderer is set to Blender Internal, and enabling GLSL shading, which allows for all rendering to be done in the view port.

After that, I brought in the image using the import images as planes addon and made some adjustments to to the texture and materials settings to make the background transparent. I then key framed it to scroll.

All that was required after that was giving it a nice background, and rendering it out with the OpenGL render buttons.

While this may not be as flexible in Blender as @zeffii's method, it can be easier and more flexible to modify the image inside GIMP, rather than Blender, because there are more 2D effects that are available inside of GIMP.

When 3D text is necessary, @zeffii's method is definitely better.

Not the answer you're looking for? Browse other questions tagged animation compositing-nodes add-on or ask your own question.

11
Can you change the font in the Sequencer new Text Effect?
1
Importing image with original asspect ratio without cropping
0
Text Scrolling in a Window

13
How can I add Lens Flares/Halos?
4
Animation slider (driver?)
7
How do I fade in/out an object in Blender 2.8 Eevee?
3
Typing animation in 2.81
4
How to animate an expanding network using Animation Nodes 2.0?
0
Is there anyway to create/terminate objects on an array, or have a render border per object? Or anything to this effect?