Using Ray Length I can make the center of a cube hollow. But what I actually want is the inverse - for the outline to be transparent and the inside solid. At a glance it seems this would be a matter of inverting the color, but since Ray Length uses the transparency to calculate this to begin with, inverting it short-circuits the signal flow and all transparency is removed. 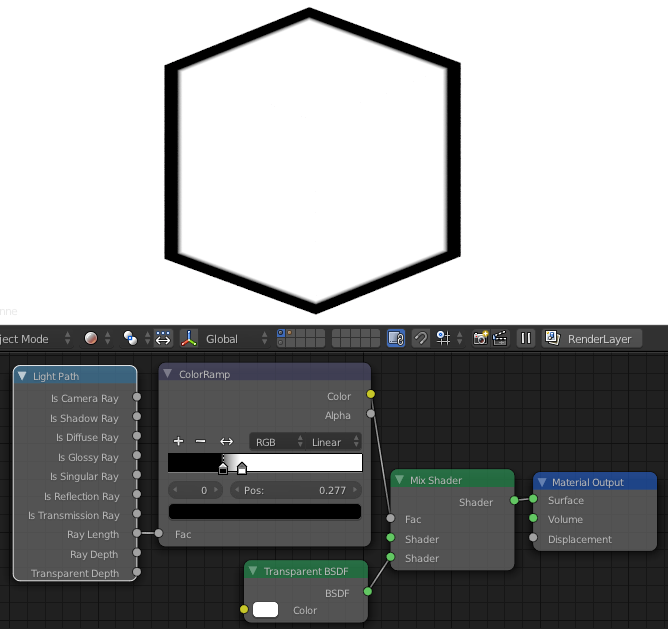 I would really like for this to work as a Cycles material, rather than relying on compositing. I also would like to avoid solutions that involve Freestyle lines. Those approaches are good for some cases, but in this case I'd like a material that can be brought into any .blend and "just work" on its own.

Since it seems this question is still getting some attention, and because I hadn't explained what the desired end result was, I thought I should add a little more info here.

My hope with this was to achieve an effect that can be used on textures such as brick walls, so that a wall's corners have transparency in the areas between the bricks. With a bump map you can generate shading that makes the bricks appear pushed out, but when it comes to corners the lack of transparency between bricks is a dead giveaway that there is no real geometry.

I have since switched to using particle systems for bricks and I think this is a more effective approach: 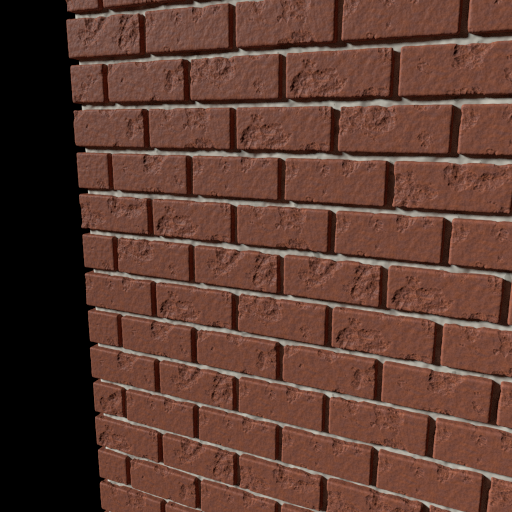 While this is a solution for bricks, it is not a universal solution for getting around-corners transparency from displaced textures. Also, geometry-based solutions tend to be more computationally heavy. Subdividing the wall a million times and then throwing a displace Modifier on is not usually practical.

So what is the solution that will work for all textures? I believe RenderMan's displacement, which creates raised geometry from a shader... is the solution.

Anyway, this is the sort of effect I was after, and hoping I could fake something close by first creating a shader with transparent borders. At the time I posted this question I was not aware of RenderMan's displacement feature. And of course, it would be nice to have this in Cycles too... we will see what the future holds.

True surface displacement can be achieved with tessellation and a Displace modifier.

There is also a new Experimental Cycles Displacement node, but since it isn't continuous across face boundaries, it creates gaps between faces.

Cycles - What is the expected range of values for Displacement?

33
What is the difference between the displace socket and a bump map?
4
Cycles - What is the expected range of values for Displacement?

4
Cycles: How can the camera position be removed from the Light Path node's Ray Length
6
Is there a way to round corners on material level?
11
What can a custom cycles shader do?
0
Blender Cycles Hair Transparency Problem
2
Eevee - Material Shader - "Ray Length" or Z-index equivalent?
3
Cycles. Masking objects with shaders (no compositor)