Is there an equivalent to Remove Doubles for Bezier curves?

I have been doing a lot of work with curves recently (mostly Bezier because of the greater control) and I have stumbled across an issue, I can't seem to find an equivalent option to Remove Doubles used for meshes. Is there a way to merge all vertices along a curve within a given distance?

For clarification, a double is considered two vertices in the same space (same coordinates), but part of different segment strings. For example, you may have a cyclic curve, three segments of which are duplicated, and not part of the one coherent whole of the cyclic curve.

There is no equivalent to Remove Doubles for Bezier Curves. This is likely due to the difference in the nature of Curves versus Meshes. As Denis stated, if the two points have different handle positions, how should this be, um, handled? ;-) Should the handle positions be averaged together? Also, Remove Doubles can just merge vertices based on a distance threshold no matter how many edges are connected to it, but Curves are fundamentally different since a point cannot have more than two segments connected to it. Simply put, Curves are linear while Meshes are non-linear.

This doesn't necessarily mean such a feature couldn't be implemented, but it would have limited use cases, and for non-identical doubles it would have to make reaching assumptions about how you want your points merged. For example, if your Curve doesn't cross itself you may be alright, but if it does it could easily end up getting merged at the intersection and the path rerouted in an unexpected way. Here's a screen shot to illustrate what could happen hypothetically: 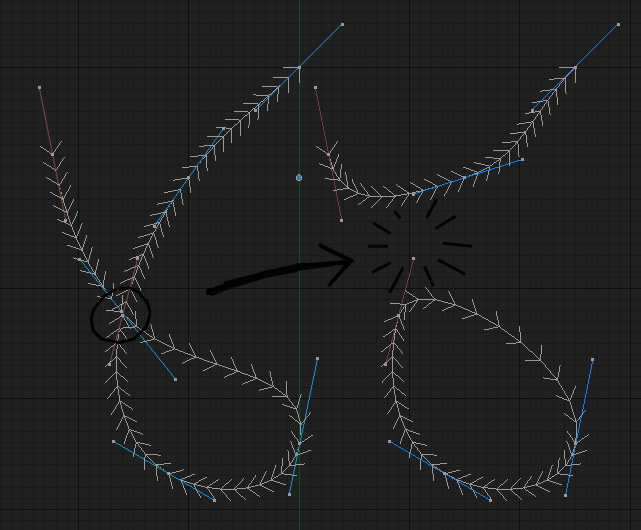 For now, you could find such disconnected points by selecting at least one point on each of your curve segments you intend to keep, using Select Linked CtrlL, Hiding them H, then Select All A and Delete X the disconnected left-over points. Then Un-Hide AltH the segments you will keep.

I know what you mean, and I encountered this need just yesterday. While it is not in stock Blender, there is a feature for this in BlenderCAM:

It's called "C-Remove Doubles" -- probably short for curve remove doubles. It works by converting the curve to a mesh, removing the doubles, then converting back again. There is a warning about it removing beziers so it might not do exactly what you want. But it worked for me.

Here is my equivalent of remove doubles on curve as addon:

5
Curve tools: is there an add-on to join overlapping curves?
0
Fixing SVG Paths

15
Mathematical formula for Bezier curves
2
Better way to join bezier curve to bezier (half) circle?
5
Curve tools: is there an add-on to join overlapping curves?
9
Branching Bezier Curves
4
Uniform "density" of bezier segments
1
Curve modifier doesn't do anything
8
Is there a way to grow this curve at a constant velocity?