Animate a Bezier curve deforming a mesh, without the mesh awkwardly rotating

I've successfully set up a mesh that's deformed by an animated Bezier curve, with the help of the Animation: AnimAll utility, with one caveat: the mesh rotates inelegantly about the curve as it animates, in all available "Twisting" options. Ideally, I'd like to implement and distribute my own option with the following formula:

Where v and v' are input and output vertices, respectively, and b is the cubic Bezier curve function. This has the effect of rotating every vertex by the same quantity that the associated Bezier tangent is rotated from the chosen axis, giving a relatively stable animation.

So the question is, is it possible to implement an additional Twisting Mode as an addon to Blender? (Using the formula I described, ideally.) Or, is there a better alternative to achieve what I want? I'd like to export models consisting of simple shapes deformed by animated Bezier curves for the project I'm working on, and the formula I described is the one that I'm using.

UPDATE AGAIN: browsing the actual source (now that I've found it) reveals an entirely C implementation of twisting that can't be extended without recompiling Blender (assuming bevel-handling code in curve.c handles all twisting, bevel or no. I believe it is.) I believe "Minimum Twist" without correction for the first point would work well enough for me, if I could change it! Otherwise, maybe there's some way into tricking Blender to not correct for the first tangent in the curve?

It is doable as scripting, probably using to_track_quat way.

but an easier way is to use Animation Nodes ad on. That is a visual / nodal scripting tool really.

There you have a set of spline tools to deal with bezier from creating to extracting data in any way. More than usual Blender tools.

Specifically for this orient/twist situations, there is a Direction to rotation Node that turns 2 vectors into rotation. Unlike the Blender "Z up" to track quat , it provides a second "guide" direction that can be related to anything. (I redesigned that node precisely for these problems)

In the example file, one orientation (Z) is the tangents, the other (Y) is controlled by the empty in the back.

Here's a file with a possible setup do do what you need. spline deform AN

You need Animation Nodes to make it work. 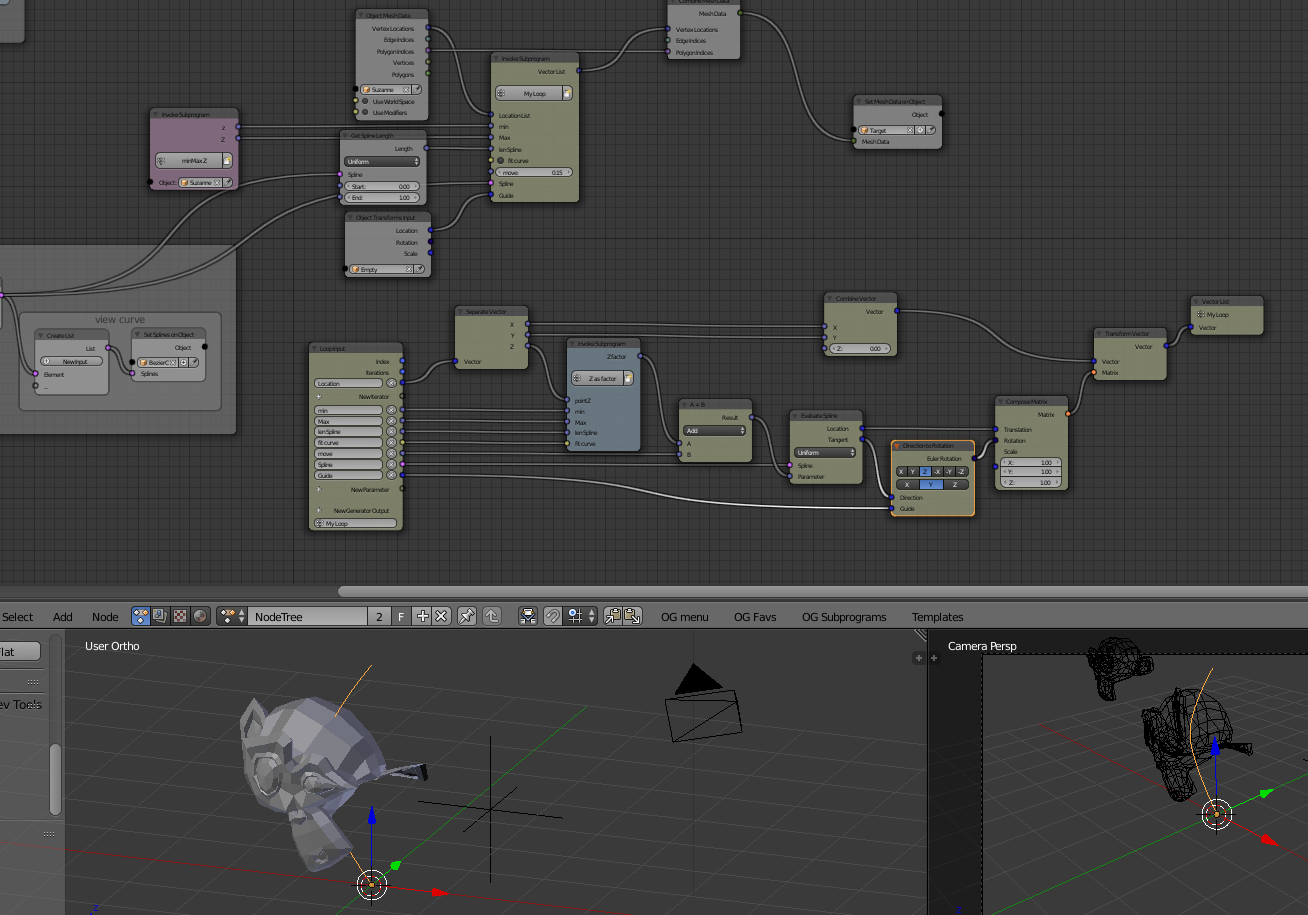 A very basic setup, cause you can further combine or animate those too. Or, for example may deform only the points closer to spline, not the far away (as xy here) or vary the second rotation along the spline etc.

Not the answer you're looking for? Browse other questions tagged animation scripting modifiers bezier-curves animation-nodes or ask your own question.

5
Vary the size of a particle instanced object
5
Particle Instance Modifier : colour each instance based on the emitter texture (like Hair strands materials do)

2
Better way to join bezier curve to bezier (half) circle?
2
Mesh appears smooth, however it is not?
14
Why does a bezier curve twist when rotated?
2
Bezier Curve: Bevel Object is creating a flat surface
2
Rounded caps on a Bezier Curve pipe
2
Duplicate object and scale across bezier curve
0
Distorted mesh when I use a bevel object on Nurbs curve vs. Bezier curve
2
Bezier curve taper on independent axes?