If you check the docs, you can see under NodeSocket(bpy_struct):

It is neither a weighted sum nor the max channel (as is the case for Value in HSV) - instead it's something I don't understand at all, something to do with the black magic of color management, but I'm happy to write it here anyway :)

In node_shader_valToTgb.c is the function node_shader_exec_rgbtobw, which calls IMB_colormanagement_get_luminance(col). Inside that function, we have dot_v3v3(luma_coefficients, rgb) - the dot product of the input color and some apparently random numbers at the top of that file: luma_coefficients[3] = { 0.2126f, 0.7152f, 0.0722f };

Recreating that as a node setup in blender gives the same result as you'd get from plugging the color into a Color Ramp node or RGB to BW node:

The cube render is black meaning the difference = 0

We can prove this by plugging a render into a Vector Curves node, and plugging that into a Viewer node - notice that the background becomes black (as the RGB values in that space were all 0): 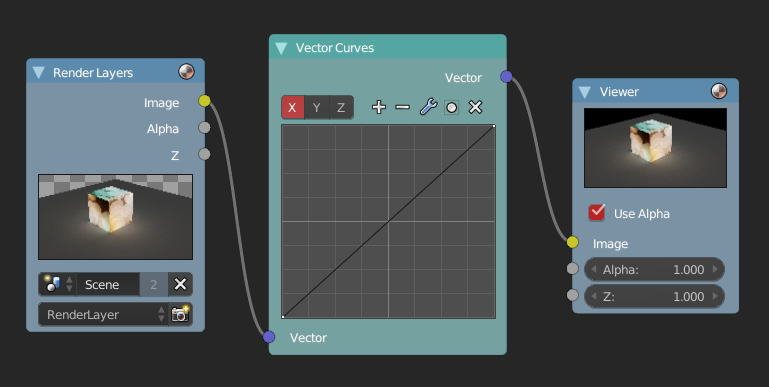 It's simply the opposite of what's said above. X becomes Red, Y becomes Green, Z becomes Blue. The alpha is always assumed to be 1.0.

This is the one exception - nothing is ever automatically converted to a shader, the result is always simply black, no matter what color or value you plug into it.

Personally I think this design is silly - if you plug a color straight into the material output (without going through any shaders first), you're expecting the result to be shadeless. But alas, this is not the case.

This is pretty obvious I think, but just for completeness: Whatever the value is becomes the same for each channel/axis when converted to RGBA/Vector (though the alpha channel simply = 1)

Have I missed anything?

node_socket_copy_default_value() seems to be responsible for moving data between node sockets, but it doesn't go along with the real behavior so I may be wrong, and here is some links further invistigation :

Not the answer you're looking for? Browse other questions tagged python cycles-render-engine scripting node-editor or ask your own question.

6
Limit "prop_search" to Specific Types of Objects
9
How to get all types of nodes dynamically?
3
CollectionProperty with inherited types
2
How do NodeSockets determine if a link between them is possible?
0
connecting two objects
2
Connecting a texture node to a material node via the Blender Python API for Blender 2.82