Will Warp bridge these two objects?

I've read documentation and StackExchange for two days or more and installed 2.74, but I'm still lost. I watched one Warp tutorial which appeared to do what I wanted, which is to create a bridge between the two objects, but I couldn't duplicate the result. I got some modification between the end points, but no fill. The objects which I'm working with present matching planes, but if one were scaled, that would be my next question. Also, the "curve" option of warp seems to be what I need, but there should also be some rotation to get a smooth transition between the two objects.

The 90 degree question and bending pipe didn't answer my question. @cegaton suggested the following as a possible solution. This may be the answer, but it may also be beyond my life expectancy to implement.

What a comprehensive user friendly program.

The succinct statement of my problem may be: join two faces whose normals don't with a projection of a user shape.
Can curve, bend or warp do that? I haven't been able to do that, and, from Allen's post, doubt that they can.

In blender there are two Warps.

The Warp tool pulls selected vertices towards the 3d-cursor. thats it.

The Warp modifier, doesn't appear to do what you'd like it to. It will warp in a straight line from A to B.

TubeTool comes closer. Here a a description ( https://blender.stackexchange.com/a/28193/47 ) and here the link to the GitHub repository. Feedback welcome. 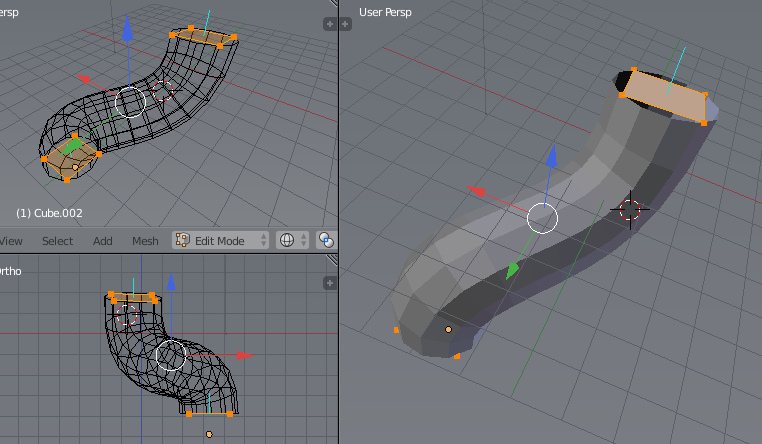 TubeTool labours under the assumption (currently) that the selected faces are part of one object. At present that means maybe duplicating them, separating selection and then joining them together into one object. The faint blue line emanating from the faces shows their normal, tube tool allows you to flip the perceived normal by providing an option to specify direction (negative or positive).

TubeTool isn't very sophisticated yet, but it could be worth checking anyway - and I'm open to suggestions.

40
Installing an addon
5
What is the fastest way to create a 90° joint?
6
A problem with Blender's Bridge Edge Loops system
1
Extrude Curve Between Two Paths

0
Ungrouping objects connected via a vertex
0
Creating a block from two wireframes
1
Script to intersect two objects gets rapidly slower
2
Why I can't select the vertices of both my objects?
1
Shared and seamless gradient effect between two objects? [EEVEE]
2
Fuse two separate objects