I'm trying to figure out a good workflow for developing scripts and add-ons in Blender. Here's what I'm currently doing as I try my luck with a PyNode add-on:

Now that I can see what my code does, this Blender instance has been modified, so I can't (make changes to my script and) run my script again. So I do this:

Is there a better workflow for this sort of thing?

I find this the easiest for addons, by editing the script while it is in the addons folder you only have to disable and re-enable it in the preferences to reload the modified script. The preferences window can be left open to keep it easily accessible.

For non-addon scripts I often edit the file externally and copy/paste it into blenders text editor. I limit what I save in a blend file, only data to start testing, I will often run the script then reload the blend from recent files to go back to the start.

I use an addon by CoDEmanX to run scripts, I picked it up from a blender artists thread. This adds the text blocks to a run script menu in blenders python console, it is much easier to get feedback right there and after you run the script the script variables are available in the console for you to explore further.

Blender text-editor is not good for coding, but using external one is cumbersome because the code still needs to be debugged regularly in blender and the blender console and outliner dataview is also very usefull. Switching back and forth would be an annoying experience for me even if the codes (external, internal) could be synced (which they can be with scene_update handlers..).

There was couple years ago an attempt to improve the Text-editor (using Scintilla that many external text editors use), but it seems dead.

So some time ago I wrote this addon to improve some Text editor functionality so I don't have to go the external path. Nowadays I would code some of it's parts differently and better (especially the multithreaded minimap updating) so any feedback is very welcomed. Here are the features:

All this was good enough for me not to use external editor. Multiple variables highlighting and multi-editing (like Sublime has) was planned but abandoned. Maybe if enough people will be interested I could further improve this. But I don't see Blender addon python api strong enough to do this properly, this should be done in Blenders code for performance (like that scintilla patch).

There is also this paid addon that does blender api autocomplete and is very nice.

In your workflow I don't see much room for optimization, except for auto-reloading your script with bpy.app.handlers.scene_update_pre handler. You should be able also to return to the start state with ctrl-z so you don't have to restart blender but that depends on what you are doing if that would work.

I use pycharm to edit the python. When pycharm loses focus it saves the file. Then when I get over to the blender window the little red circle icon in the header of the text editor area allows me to reload the script.

How about after you run the script: do not save; instead use File > Open Recent ( or Ctrl+Shift+o ) and re-load the version you saved in step 6. Once you have it open, you can load the latest version of the addon and try it again.

In my personal projects I try to code in such a way that I can run the script multiple times and it still works (either by deleting the old versions of the objects, or by updating them).

Sometimes I have a second script whose job it is to purge stale versions of objects to create a clean(er) slate.

For an external workflow I suggest Script Runner. This Addon allows to execute external scripts (up to 10 external python files) in 3d View or the Text Editor.

Since every script is basically a button, you can assign a shortcut via Right Click: 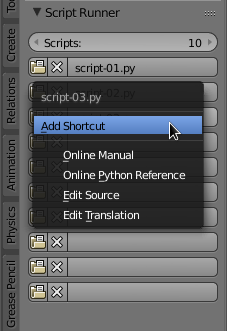 I personally prefer Q, this results in the following workflow:

Not the answer you're looking for? Browse other questions tagged python scripting workflow add-on or ask your own question.

0
Python coding environment
11
How To use Visual Studio Code to write blender python script integrated with blender?
4
Calling Python Function from Console
6
How to enable and disable Add-ons via Python?
4
How do I set up a complicated rig correctly for linking? (Advanced)
3
How to properly paste Python function block into python console?
8
Is it possible to build blender scripts in external editor like Atom
5
Can Blender automatically reload external script files when they are changed?
2
Use Visual Studio for Blender Python scripting
2
How to reload all text editor scripts at once
See more linked questions

15
Is it possible to run a script from an external editor without reloading the file?
2
Can't get script to auto execute
2
How to reload all text editor scripts at once
3
How do I keep in development add-ons under source control and easily reload changes in Blender?
1
How to install an add-on from a workspace template init file?